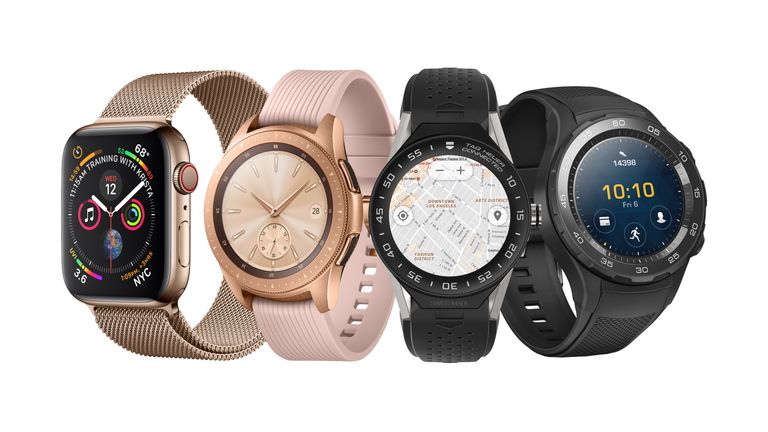 These are the very best smartwatches money can buy, from the stylish Apple Watch Series 5, through to the powerhouse Samsung Galaxy Watch, and onto the incredibly desirable TAG Heuer Connected Modular 45.

Of all the wearables available in 2020, the Apple Watch has the most developed platform. It's also the most attractive, and, arguably, more technologically advanced than its competitors.

So there you have it, we're recommending the Apple Watch Series 5 as the best smartwatch available to buy right now... but, there are of course alternatives because if you have an Android device, the Apple Watch won't cut it...

Luckily for you dear reader, we've also got a selection of brilliant alternatives for those who don't have an iPhone.

No matter what smartwatch you're after, this page will help you find the best one.

There's no doubt Apple is king when it comes to smartwatches, but how has it achieved such meteoric success? Let's take a look…

First off, it's the only smartwatch which generates a tonne of interest, and not just from tech addicts, but from the general public. That interest hasn't exactly helped Apple's competitors, but it has helped Apple's smartwatch survive six generations.

Next is the big focus on health and fitness. The Apple Watch can monitor your heart rhythm and suggest you see a doctor if it detects something irregular, it can call the emergency services you've fallen over, and it will keep you healthy by tracking your run. These potentially life-saving features are a major reason people are ditching their traditional watches for an Apple Watch.

Finally, the design is almost perfect. The two size options are fit a majority of wrists, and they're also incredibly comfortable. it's the only device which has straddled the line between tech and fashion. It's simply the best-looking smartwatch available.

Every generation has seen minor improvements that have gone a long way to perfect the Watch. The Series 2 added waterproofing and adding GPS, and the Series 3 improved on that by adding Cellular, so it can use data without your iPhone present, but again, remaining loyal to the original design.

The Series 4 improved the design, with a stunning new screen which stretches to the edges of the device.

The Series 5 has kept the excellent design of the Series 4, and added more customisation options (including a desirable titanium option) and an always-on display.

Put simply, the Apple Watch Series 5 impresses us greatly. The design is well-considered and sleeker, the screen, in terms of PPI and colour depth, is perfect, and the number of third-party apps and accessories is unrivalled.

That last point is important, because if you're buying a personal device such as a watch, you actually want it to be unique.

It does have a few negative points, the UI is fiddly (although greatly improved with watchOS 6), especially compared to more simple rivals such as Android Wear. Of course, it's iOS only, so if you have an Android Phone, you're going to want to continue reading this guide…

The Apple Watch Series 5 sits at the top end when it comes to cost, with prices ranging from £399 to £1,399. That makes it slightly more exclusive.

Check out the best prices here:

The best smartwatch for Android users

If you prefer Android phones to the iPhone, the Samsung Galaxy Watch Active is a very worthy competitor. This is the best smartwatch if you're an Android user, with a sleek design and powerful hardware.

Let's start with the circular screen, which is certainly on par with the Apple Watch, so too is the gorgeous, streamlined design. It comes packing some neat abilities as well, such as Blood Pressure monitoring (eventually) and water resistance.

A collection of new, infomation-filled watch faces give it a modern edge, and while it lacks quality third party apps we think you'll find the built-in apps sufficient. Overall, it's a very compelling package.

It's worth noting the Samsung Galaxy Watch Active2 has just been announced. This comes with more features than the original, but is also a lot more expensive. We'll review it soon, and let you know if it's worth the extra money.

The best smartwatch for battery life

If you're not interested in the sleek, compact design of the Galaxy Watch Active, then the Galaxy Watch is probably more up your street. Its availability in two sizes will definitely help it appeal to more people, and itt also has a very good battery life (we're talking between three and 6 days, depending on the model).

It's more attractive than previous incarnations, and comes packing some neat new fitness tracking abilities. It's the innovative rotating bezel that is the star here, though, as it is without doubt the best way to control a smartwatch.

The Galaxy Watch works with most Android smartphones, and even iPhones, but it's not perfect, however, as the Galaxy Watch isn't as comfortable to wear as the Apple Watch, and its app and accessory ecosystem pales in comparison.

The pros far outweigh the cons however, and you won't be let down by the Samsung Galaxy Watch.

A sporty smartwatch for Android users

Fossil is now on its fourth generation of smartwatches, with the company learning from and improving each new iteration. As a result the Fossil Sport is probably the best Wear OS smartwatch available to buy today.

It's a premium smartwatch which features GPS, a lightweight design, and the Snapdragon Wear 3100 chip inside, which offers a greatly improved experience over older smartwatches.

As it runs Google's Wear OS, there are a plethora of apps and watch faces to choose from, so it's better than the Samsung smartwatches in that respect.

You can expect around two days of battery life, and, while the Sport doesn't feature any unique features, it is still a very capable, wearable, smartwatch.

TAG's second attempt at a smartwatch, the Connected Modular 45, is a handsome looking device, mimicking a traditional mechanical watch, with its fully circular display and sporty-looking case. The Modular adds some welcome customisation to the smartwatch mix.

The Modular 45 is undeniably a class above its Android Wear siblings, and aesthetically preferable to the most expensive Apple Watch variants, which are the only rivals in the 'luxe smartwatch' market. It feels more 'watch-like' than any other rival too.

The seconds Connected feels more premium than the first generation, and TAG has upgraded the screen.

If you're looking for the most premium smartwatch look no further than the Tag Connected. If you really like watches and you really like tech, it's the only game in town outside of the Apple Watch.

If you're looking for something a little smaller, then try the Skagen Falster 2 smartwatch. It's probably the best all-around WearOS smartwatch you can buy.  Not many Android smartwatches can be described as elegant, but Skagen is a Danish brand known for creating simple, timeless timepieces.

The Falster 2, just like a few other smartwatches on this list, is powered by Google's WearOS, which includes Google Assistant, smartphone notifications, activity tracking, world time, weather and more.

A battery-efficient dial design provides up to 24 hours of use on a single charge, and interchangeable straps allow you to customise your look.

We love the simple watch face designs which come preinstalled, and each watch comes with an inductive magnetic charger.

The Huawei Watch GT 2 is different to every other smartwatch on this list – it's a mix between a smartwatch and a fitness tracker.

It looks like a smartwatch, and it has a great, high-resolution screen. It can even run basic system apps (like a calendar) and notify you about calls and messages. It can't run third-party apps, however, and you can't personalise the watch faces (although there are a selection to choose from).

Its main focus is on fitness tracking, with the Watch GT 2 keeping tabs on your lifestyle and exercises. It has a heart-rate sensor and GPS. Of course, without the integration of Strava or other fitness apps, this is more likely to appeal to fitness novices rather than road warriors.

What's most impressive is that the battery life lasts around two weeks, meaning, theoretically, you'll only have to charge it 27 times a year.

The Huawei Watch GT 2 is a weird sell, but if basic fitness tracking, notifications, and a long battery life are key, then this could be the smartwatch for you.

Still and excellent buy, if you're not sold on the Series 5

Despite being replaced by the Series 5, the Apple Watch Series 4 is still a fantastic smartwatch. It's now also cheaper than its ever been, while stocks last…

You get the same, large-screen design as the Apple Watch Series 5, and basically the same specs and features as well. You do miss out on the always-on display, but you'll be able to boast about longer battery life for the sacrifice.

So, if you're not completely sold on getting the latest and greatest Apple Watch, the Series 4 is a solid bet.

Not as expensive as the Apple Watch Series 4

The Apple Watch Series 3 introduced a cellular connecting, meaning you can continue to receive phone calls and notifications away from your iPhone.

It also runs the latest software with all the latest features, it just misses the more futuristic design of the  newer Series 4.

Watch 2 has a bright screen and everything runs smoothly and speedily. It's incredibly comfortable and the look is, if not great, then at least acceptable. It's unfortunate that Huawei hasn't included any rotary controls on this, especially as the bezel is a big old thing and as such probably quite easy to grip 'n' twist.

Despite that, it's a very competent Android Wear 2 watch. What's more interesting, however, is the concentration on fitness.While it features all of the necessary sensors to track running, cycling and swimming, our initial testing has revealed the Huawei Watch isn't the stellar performer we hoped it would be. Which is a shame, because emphasising the fitness element was exactly the right thing for Huawei to do, and hopefully the company can improve its fitness tracking software updates.

One final note we'll say about the Watch 2, something we're having trouble putting our fingers on. While the screen is small, the UI cramped, and the fitness tracking poor - we really enjoy wearing the Huawei Watch 2. It's incredibly comfortable, and just has a certain 'wearability' factor that makes us keep coming back to it.

The Nixon Mission is a rugged 'action' smartwatch, and we really like it. The durable casing can take a bashing, while the Qualcomm Snapdragon Wear 2100 keeps things ticking inside. It runs Android Wear, but also comes with some useful pre-installed apps which track real-time surfing and snowboarding conditions. It's water resistant to 10ATM (roughly 100m), and best of all, it comes in Orange.

An affordable smartwatch for the curious

If you're interested in wearing a smartwatch but don't want to spend £200+ on a top of the range device, then the TicWatch C2 from Mobvoi could be for you. It does everything you'd expect of a WearOS smartwatch, including heart-rate tracking, GPS, and Google Pay, but costs significantly less.

It also has a pretty inoffensive design, but it won't win any prizes for build quality.