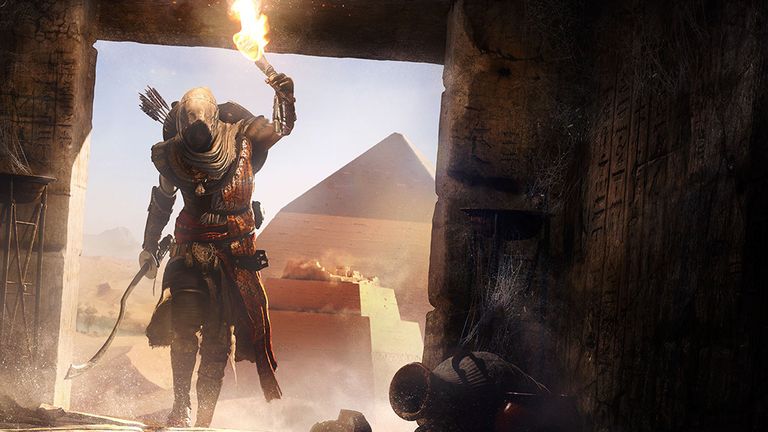 This October, following a year-long sabbatical away from the world of videogames, Assassin's Creed returns home. Origins is set to offer the series something of a soft-reboot, bringing together some of the franchise's best mechanics with a fresh new outlook for 2017. So to get you in the mood for another round of hooded stabbery, we've delved into the history of the Assassin/Templar war and discovered how real-world innovations inspired the technology of the series so far...

The hidden blade has become as synonymous with Assassin's Creed as white hoods and questionable eavesdropping missions. The design has had multiple variations throughout the series (with early versions using a basic design of leather straps and a steel blade - as well as the need to cut off your middle finger to enable the blade to extend and retract).

Interestingly, there's little record of similar devices being used in real-life history. As dramatic and distinctly badass as they might look, the practicality of having a long, retractable blade wouldn't have suited many assassins - either because a) they weren't disposable, b) knives and blades often break and c) few people want to be caught with an expensive murder weapon strapped to their person.

For most fans, AC's second outing remains the best entry to date. Not just because it featured swoon-inducing hero Ezio Auditore da Firenze, but because it featured one Leonardo da Vinci and his incredible flying machine. Okay, demoting one of the greatest forward-thinking minds in human history to the Renaissance equivalent of Q from the James Bond films was a tad insulting, but it gave developer Ubisoft Montreal the chance to include the man's real life designs for in-game tools.

One such tool was one of da Vinci's most famous designs - a wooden structure the Italian auteur believed could grant a man the power of flight. By around 1485, da Vinci had become obsessed with aviation and produced countless schematics and blueprints for flying machines (including a mechanical wing that inspired the vehicle used by Ezio in ACII).

That wing formed part of his most famous flying machine design, the 'ornithopter', a machine with a 33-feet-long wingspan that used frame made of pine covered in raw silk to create a light but sturdy membrane. According to da Vinci's actual plans, the pilot would lie facedown (much like a hand glider) and use a crank system to work the wings. There's no historical evidence to suggest such a design was every logitically attempted in the 15th century, but it proves the Italian was almost certainly the first European to suggest a feasible concept.

Rope darts have been a staple in the series for years, but they had their best outing in Assassin's Creed III as Connor Kenway aka Ratonhnhaké:ton used them to pull enemies off their horses and tie guards to branches like bloody pinatas. And, as you might expect, these deadly projectiles aren't a fictional creation - they're a real-life tool that's been in use for centuries.

The shéng biāo (also known as the Jōhyō in Japanese culture) was first recorded in China as far back as the Tang Dynasty (618–907 AD), and had usually consisted of a short blade or hook tied to a line of rope or chain. The length this rope/chain entirely depended on the weight of the projectile (and the strength of the user) with recorded versions ranging between 3 and 5 metres.

It's one of the most unique weapons from ancient history, requiring the user to twine (wind the rope up), throw and retrieve the rope dart. It was used to slash opponents from a medium range, impale itself in enemies from afar and launch them forwards and bind them during battle.

In the world of Assassin's Creed, the mystical Apples of Eden (artefacts from a lost yet hyper advanced civilisation) provide the Assassins and the Templars with technology that's centuries ahead of real-world discoveries. So for the AC folk, the concept of a wrist-mounted gun or projectile launcher appeared as early as Renaissance Italy.

In reality, concealing any sort of weapon on your wrist presents a raft of technical problems to navigate, so it wasn't until the end of the 18th century that we start to see guns small enough to be concealed in one's hand. The Derringer, often known as the 'palm pistol' was one of the first, and fired small .40 cartridges.

Models were usually around 5 inches long, and due to their small barrel size you'd need to be pointing said weapon directly in someone's face to hope to cause anything other than a nasty bruise. Each projectile would travel at about 425 feet per second (a regular sized pistol of the same era would have shot a ball at twice the speed).

Sleeve guns did start to appear during the 20th century, with a modified version of the suppressed Welrod pistol used by British agents of Station IX of the Special Operations Executive during WW2. Another version was also in use by British agents during the conflict, which used shot .32 ACP and 9×19mm ammunition. Again, this was a close quarters weapon rather than something that could be used with any sort of range.

The humble grappling hook has been a part of popular culture since time immemorial, but it didn't enter the Assassin's Creed lexicon until around the 19th century with the wrist-mounted Rope Launcher designed for Evie and Jacob Frye in Assassin's Creed Syndicate.

In our own timeline, the grappling hook has been recorded as early as the Romans, with the powerful empire using a simple hook on a length of rope alongside a spiked plank called a 'corvus' in order to secure and board enemy ships. This tie to naval warfare would continue for centuries afterwards, with claws (or 'flukes' as they were sometimes known) used to catch ship rigging and pull two vessels closer so one crew could board the other.

The grappling hook also popped up in ancient history in the East during the heyday of the samurai, with a design known as the 'kaginawa' ('kagi' translates as hook, 'nawa' as rope) used by ninja and regular soldiers as a siege weapon to scale the side of a castle or settlement.

Pre-20th century designs relied on manual strength to launch the hook to make it work, but later versions used a carefully coiled rope contained in a tube. Compressed air would then be fired through the tube, launching the flukes and the loosening rope to its destination. In modern day warfare, grappling hooks are still in operation, although they're mostly used by combat engineers to trigger trip wire mines from afar.

The Animus is the technology that sits at the heart of the Assassin's Creed universe, a fictional machine that enables a person to explore genetic memories and interact with them like a full body VR experience. It's the McGuffin that drives the conceit of the whole series, but could such technology really be replicated in real-life?

Our genome does indeed contain an archive of information that documents our journey to modern man, but it's not as deep or as comprehensive as Assassin's Creed explanation. In fact, we share most of our genetic makeup with primates, but recent advances in the field of 'epigenetics' (where genetic change occurs through environmental experience). This field is very much in its infancy, but studies suggest our DNA holds imprints of everything from diet to how rich or poor your family is.

There's also research being conducted in Berkeley University that's centered around using blood flow and neural activity to create visual representations of actual memories. According Sebastian Alvarado, a molecular biologist at McGill University who wrote a piece on the subject for Kotaku back in 2012, the tests have shown some pretty impressive results - but we're certainly a long way from the Full HD immersion of the Animus.

Advances in virtual and augmented reality have certainly brought us closer to realising the Animus dream. Full-body rigs, such as the Pioneer suit from Tesla (which uses a wetsuit like getup to create sensory feedback across the entire body) or the Teslasuit haptic system are enabling scientists to take the concept of simulation and expand it into an experience that goes beyond sight and sound.

If all this talk of Assassin tech has got you in the mood for a little historical parkour, you can order Assassin's Creed Origins for Xbox One, PS4 and PC on 27 October 2017.