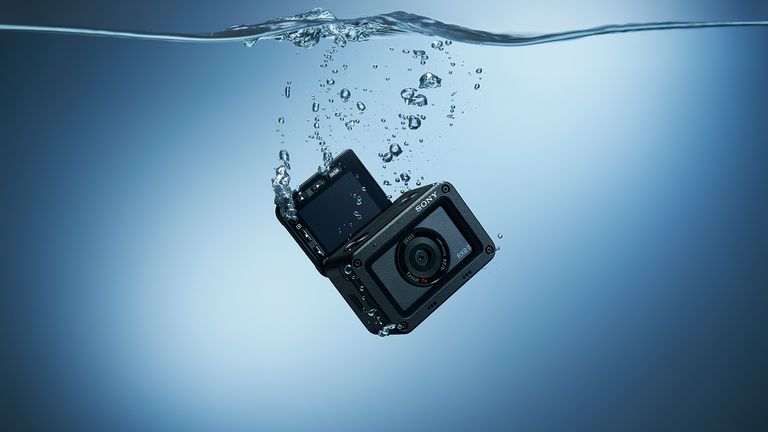 The Sony RX0 II is capable of producing fantastic video and stills, but that comes at a cost, both in terms of initial outlay and the lack of performance-boosting features such as decent image stabilisation and a touchscreen. This ‘tiny tough’ camera boasts superb build quality and an impressive 1-inch sensor, so has the potential for capturing amazing stills and video, but we wouldn’t recommend it for high-octane action shooting in the way we would a GoPro or DJI action camera.

With its rugged GoPro-esque design, it's easy to see why Sony describes the RX0 II as a ‘tiny tough’ camera – and why so many place it in the action camera family. After all, it's burly, certainly designed for survival and features its own take on electronic image stabilisation (EIS), plus some rather nifty imaging hardware.

Plucky action cameras like the current category leaders – the GoPro Hero 8 Black and DJI Osmo Action – are designed to join you for the ride, whether you’re ziplining or scuba diving; they’re always primed to shoot and produce silky smooth footage thanks to gimbal-like electronic image stabilisation (EIS).

The RX0 II represents a considerable update to the original RX0. While the overall design is much the same, a striking new addition is the 180-degree tiltable 1.5-inch rear screen. This enables users to capture cool angles, while avoiding direct sunlight when framing a shot.

Flip the screen 180-degrees upward and you have a monitor for recording vlogs or taking selfies. It’s not as nifty as the integrated front screen on the DJI Osmo Action, but it’s a useful feature.

Getting up and running with the camera presents little drama, however it’s when you start delving into settings that your patience is tested. Prodding fiddly buttons to navigate almost 30 menu pages on the tiny screen seems misjudged in a world where the touchscreen is king.

For example, navigating a GoPro’s touch interface is simplistic yet intuitive and gets the job done quick and fast. While the Sony offers far deeper control over camera settings, which might appeal to more experienced photographers, it’s definitely not geared up to quickly point and shoot when those off-the-cuff moments occur.

The RX0 II is similar in size, weight and build to the likes of a GoPro and DJI, and you may even prefer the Sony’s smart ribbed duraluminium body – this thing is tough! Despite that, it weighs just a touch heavier than both the GoPro (116g) and DJI (124g) at 132g.

It’s also waterproof to 10m, dustproof, crush-proof and drop-proof from 6.5 feet. It’s certainly designed for action, even if the reality is less white knuckle and more scenic stroll…

Like the original RX0, this second generation features a powerful 1.0-type sensor, which is around four times the size of those crammed into flagship action cameras. There’s also a low-distortion ZEISS Tessar T lens and BIONZ X image-processing engine in the mix, which combine to offer wide dynamic range, reduced noise and truly superb detail from both stills and videos.

Recording 4K video on the RX0 required an external recorder. There’s no such faff here, as now you can shoot 4K30 natively, bag Full HD up to 120fps and super slo mo up to 960fps. The RX0 II also shoots video at a higher bitrate than other cameras of this ilk, meaning there’s way more detail packed into each frame.

It’s a welcome upgrade to the earlier model, but performance isn’t a patch on its competitors. The Sony is much more at home mounted to a tripod or sat on a fixed surface. The Sony VCT-SGR1 Shooting Grip would be a wise investment if you’re planning on shooting handheld.

If you’re less inclined to meddle with camera settings, Sony’s Intelligent Auto mode chooses the right set-up for every shooting scenario, leaving you to focus on framing, or memorising an intro for your next vlog.

For more technically-minded photographers, in manual mode the RX0 II enables you to take control of everything from shutter speed and ISO, to aperture and white balance, so you can fine-tune your shots.

The RX0 II is also capable of shooting 15.3 megapixel stills in both JPG and RAW formats. Image quality is undeniably fantastic, capturing bags of detail, particularly when there’s plenty of light to play with. In lower light scenarios there’s a little more noise than we’d have liked, but it certainly beats the stills you’ll take with the GoPro Hero7 Black.

So in terms of stills quality, the Sony would win over the DJI and GoPro but only in a controlled environment. Ie, if shooting from a fixed position such as a tripod. Similarly, in terms of video, the Sony would win for slow-moving shots if filming from a fixed position, but that glory is undone as soon as the action starts moving and the Sony needs to follow.

The RX0 II delivers autofocus of sorts, but oddly it won’t refocus during shooting. It focuses on whatever object it’s first fixed upon when you start shooting, and that’s it. This is frustrating if, like us during testing, you plan on shooting continuous action with moving subjects.

The Sony’s 24mm lens means a more limited field of view than traditional action cameras that normally boast an ultra-wide FoV. There’s no fisheye look here – which will be welcome to some – but that does mean you’ll have to be more precise when framing shots.

As a result of so much processing under the hood, battery life is shorter than other cameras in this field, coming in at around the 60-minute mark. Thankfully, batteries are removable so you can always carry a spare.

With waterproof cameras, there’s usually an element of compromise when it comes to audio – all that extra protection can really stifle sound performance. However, the Sony’s audio is surprisingly good, whether we were shooting on a windy day or wading through crashing waves. Sony has also seen fit to include a mic jack (behind a watertight door) for an external microphone if you want things to sound more pro.

Sony offers smartphone connectivity for basic editing and sharing of footage (recommended apps include Movie Edit and Imaging Edge Mobile), but these are fairly limited and most serious users will be sending footage and stills straight to software like Lightroom or Final Cu

f you’re a regular adventurer or vlogger looking for a quality compact camera designed to survive outdoors, the Sony RX0 II ticks plenty of boxes. But even so, there are better (and cheaper) cameras out there for vlogging, including Sony’s own RX100 IV compact. If you’re after an action camera, we’ve mentioned the best options already. As a result, it’s difficult to know exactly where the RX0 II fits in.

In terms of cost, you’re looking at an eye-watering £729, which is almost twice that of our top pick, the GoPro Hero7 Black. Yes the Sony packs in far more potent photographic firepower, but it’s certainly not twice as good as the GoPro to justify that price tag.

It’s difficult to talk about the RX0 II without mentioning the big guns of the action camera world. The Sony certainly looks like an action cam, but in reality it’s different. Yes it’s super-tough, so it’s an action camera in build and ruggedness, but we wouldn’t recommend it for shooting fast-paced, high-octane action.

And this is the crux of our dilemma: the Sony RX0 II has all the potential to be a fantastic action camera, mainly thanks to that impressive 1-inch sensor and great build quality, but the lack of decent EIS and that awkward approach to settings leaves it falling short.