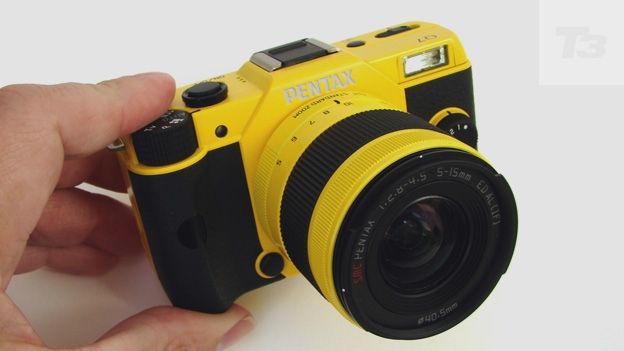 Its pocket size and crazy colour scheme options mean that the Pentax Q7 resembles a toy, but is this the one with which the brand's CSC range finally gets serious?

Aside from the fact that they (typically) incorporate a larger sensor than those found in a humble pocket snapshot, plus there's the DSLR-like advantage of swapping the lens if wished, most compact system cameras need a greater USP.

In the case of the Pentax Q7, which follows the Pentax Q10 and the original enigmatic Pentax Q of 2011, it's that this is the smallest mirror-less camera on an increasingly crowded block.

The size of a pack of playing cards, and resembling a retro-feel SLR that's been shrunk, its official dimensions of 58 x 102 x 33.5mm and weight of 200g with lithium ion rechargeable battery and SD card mean it's very portable and so you're more likely to carry it with you than any DSLR or CSC rival.

However, when coupled with the wackier body colour options - such as the canary yellow of our review sample - the smaller than usual proportions can mean it resembles a toy.

On a more serious note, the surface area of the sensor at 1/1.7-inches is larger than the bog standard 1/2.3-inches of the initial Q - the bigger the sensor, the better its light gathering properties.

Coupled with this, as the actual resolution has sensibly remained at 12 megapixels - in other words the chip isn't overly crowded - in theory we should be getting a better low light performance with less grain/dots at higher ISO settings.

However, this spec still doesn't come close to matching the APS-C sized sensors that slightly more expensive rivals from Samsung in its NX series, Canon in its standalone EOS M and Fuji and Sony with their X and NEX models respectively offer. On the other hand, all are physically bigger overall than the cute Q.

There's also the price tag here to consider, and at a manufacturer's suggested £399.99 with 3x standard zoom (5-15mm), the Q7 isn't breaking the bank.

We'd predict street prices will witness this camera offered for a bit less, however, given the strength and number of rival brands, and especially as it misses out on latest connectivity must-haves such as built-in Wi-Fi and NFC (though there is Eye-Fi card compatibility).

On the plus side, with the aid of a separate adapter, Pentax K mount lenses, as attached to its DSLR range, can also be used on the teeny Q.

Small may be beautiful, but of course diminutive dimensions should prove practical too. So does the Q7, like small-ish rivals in the Canon EOS M and Nikon 1 J3, manage that delicate balancing act?

Quick to power up in just over a second, a small camera inevitably means small controls. The back plate buttons, so miniscule as to be roughly the size of the head of a tack, require fingernail precision.

Despite this, the pocket-sized Pentax has most photographic bases covered. To the right of the LCD screen we're provided dedicated options for altering exposure (+/- 3EV) and deleting shots.

There are also options here for adjusting ISO (not always as prominently featured elsewhere, so nice to see here) to artificially boost performance in the dim (with the full ISO range available in any other shooting mode but auto), plus tweaking white balance and summoning up self timer and flash options.

Making the most of space, a spring loaded pop-up bulb has been cleverly sunk into the top plate. Completing the control line up is a self-explanatory menu button, a press of which summons up several folders-worth of options including DSLR-like custom settings, plus info.

More unusually for a camera of this size we get a rear control dial for scrolling through settings, such as ISO, via the thumb, plus a second forward-mounted wheel of identical size, controlled via the forefinger.

Around this stiff-feel control, the shooting modes are helpfully located. There are eight choices here, including full auto operation alongside program, shutter priority, aperture priority plus manual settings.

Naturally we additionally also get a smattering of pre-optimised scene modes for common subjects, plus an option enigmatically marled BC, which stands for Blur Control. Using a combination of this setting and the rear control dial we could dial in how much of the image we wanted sharp and how much selectively blurred - so as to achieve an attractive shallow-depth-of-field (subject sharp, background blurred).

This is achieved via a software fix to ape the effect of simply choosing a low f number via the lens.

It's also worth mentioning the front dial, which offers a range of settings from 1-4. We had it programmed to access the different colour filter options - including Brilliant Colour and Vintage Colour - at a simple twist of the wrist.

The Q7 may look outwardly a tad simple, but it gradually dawns that there's more going on beneath this approachable exterior than first meets the eye. If we've a grumble it's that auto focus (AF) performance could be swifter still, but this is a criticism of most cameras below the £500 mark.

A 3-inch LCD screen with a 460k-dot resolution feels like the bare minimum these days, when other CSCs, admittedly at a much higher price, offer built-in eye-level viewfinders and, on occasion, tilting ones at that.

In fact, in terms of screen the Q7 sports the sort of specification that you find on a snapshot camera of similar size; there's no touch panel operation here for example. That said, given the overall size it's no surprise that this part of the package lacks a certain wow, and under artificial light conditions, whilst adequate for lining up a shot, the screen is still a bit murkier than we'd have liked.

Something of a rariety these days, Pentax has supplied the Q7 with a proper standalone mains charger, rather than simply forcing us to recharge the battery within the camera itself.

A maximum 260 shot power duration or thereabouts is pretty standard and feels no better or worse a performance than its contemporaries. For example the Nikon J3 managed 230 images from its fully charged cell.

The fact that the lens supplied with our Q7 review sample boasted a f/2.8 maximum aperture enabled us to achieve some lovely shallow depth of field effects in camera without resorting to software trickery; but in terms of how this Pentax handles and what it can do, it does feel that the camera is pitched somewhere between complete novice and enthusiast.

In other words, while it is possible to get pleasant enough results from simply pointing and shooting, those who know a bit more about photographic settings will be able to get the most out of this Q.

If we've a criticism it's that the front dial, which we had set to the camera's colour options could be a little stiffer; we found it too easy to jog this wheel in the course of handling the camera and suddenly finding the shots we took were extremely well saturated in terms of colour and quite contrast-y.

On the other hand, in duller weather conditions this can prove more of a help than hindrance, when a bit of additional visual punch is welcomed.

For indoor shooting with natural light, the manually selectable ISO options range from ISO100 to ISO12800. Unsurprisingly the results at the two top settings of ISO6400 and ISO12800 were fairly grotty in appearance, with colours wandering and grain in full effect.

However, at ISO3200 and below we were much happier with what we got. Inevitably the camera's 1/1.7-inch sensor can't match the performance of an APS-C chip and physically larger piece of glass stuck on the front of the camera. But the Q7's performance is pretty much commensurate with what we'd expected.

Video performance is perfectly satisfactory too, recording commencing and ending with an initial and subsequent press of the shutter release button. There is no separate video record button as found on most still cameras these days.

This means that the shooting mode dial needs to be set to video mode before shooting can commence; not that it's much of a hardship.

Complete novices may find it harder to manually adjust focus using the front most lens ring mid flow, but again this is accurately achievable with a bit of practice, the LCD screen large enough for us to be able to tell when we'd got a subject sharp or not.

The fact that compared with larger, pricier CSC rivals the 12 megapixel Pentax Q7 appears like a bit of a toy may actually appeal to those who like their tech on the cute side. Plus on a creative note your subjects will certainly feel less self-conscious when you poke the Q7 in their face than when confronted with a full size DSLR.

The result is that you'll take shots that you maybe wouldn't have attempted with a larger camera. The lack of size and weight also encouraged us to interpret the Q7 as a bit of pure fun, and we found our photography getting more experimental as a result.

So while bearded photo enthusiasts might cock a snook at the Q7, it's very much a case of horses for courses. We would advise, however, you pick up and play with one before making a purchase, to make sure it's a perfect fit for both your hands and your needs.