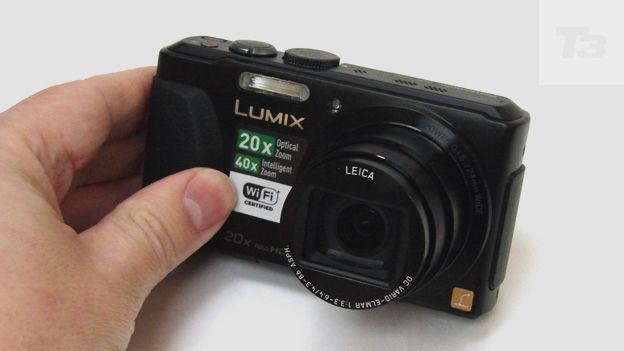 When we reviewed the previous generation Panasonic TZ30 travel zoom last summer, we remarked that its 14.1-megapixel resolution already felt underpowered compared to the 16 and 18 megapixel offerings of rivals.

Happily Panasonic has corrected this for the 2013 version, with the Panasonic TZ40, ramping up resolution to 18.1 megapixels. The physical dimensions of the actual sensor haven't changed however, so that's more pixels crammed into the same 1/2.3-inch space.

While this small size roots the camera firmly in snapshot territory, this is arguably the most fully featured point-and-shoot we could hope for at this evolutionary juncture.

Available in black, red, silver or white, the TZ40's main sales pitch remains the 20x optical zoom. As with the TZ30, this offers a focal range equivalent to 24-480mm in 35mm film terms - so plenty of framing options at our fingertips without having to physically take a step forward or back. It retracts within the body when not in use.

Increased resolution aside, also new is Wi-Fi connectivity for exchanging pictures with our smartphones, laptops, iPads or other suitably enabled devices. Grasping the nettle, Panasonic has come up with a downloadable Lumix app to enable the camera to be controlled remotely via your handset.

Add to this the body-integral GPS previously seen on the TZ30 - which not only records the location at which the shot was taken but adds a compass and levels meter - and this travel zoom would appear to have just about everything you might want from a holiday snapper.

We had the matt black version of the TZ40 in for review, which, with rubber leather-effect handgrip to one side, looks almost a match for the Sony NX20v 18MP competitor in terms of design sophistication. The black finish also has a slimming effect, so this Lumix appears even narrower than its manageable 27.7mm depth, meaning it will slip comfortably into trouser or jacket pocket.

Naturally however, we don't want a long zoom compact to be so slim or diminutive that camera shake/hand wobble results in lots of blurred shots towards the telephoto end of the zoom. So Panasonic has introduced five-axis image stabilisation (as opposed to the more commonplace dual axis anti shake), formerly only a feature of high-end compacts such as the Olympus OM-D.

Another feature that appears to have trickled down from compact system cameras is what Panasonic terms 'Light speed AF', which can pinpoint focus and exposure with a half squeeze of the shutter in 0.1 seconds - roughly the blink of an eye. The result is we were pretty much guaranteed to get the shot we saw in our mind's eye before squeezing the shutter release.

The cost of the TZ40? Around £330 to £350, the same as was being asked for the TZ30 on launch. For a penny shy of £300 Panasonic is additionally offering the 20x zoom TZ35, which omits Wi-Fi and has a slightly lower 16 megapixel top resolution.

With the solid-feel build quality we're used to from the TZ series in evidence here, the Panasonic Lumix DMC-TZ40 features what could be termed a classic control layout.

It incorporates a top-mounted shooting mode dial allowing us to spin through ten creative, custom and fully automatic shooting options, while sitting ergonomically alongside a raised shutter release button encircled by a lever for controlling the zoom.

Immediately to the right we have a dedicated record button for Full HD video clips, and behind that a lozenge-shaped power button set into the top plate to prevent accidental activation when merely pulling the camera out of a pocket or bag.

Further set into the top plate are stereo left and right microphones plus speaker, while, in seeking to maintain a sleek finish, it is bereft of a tell-tale raised bump for its GPS antenna.

Although the backplate features a touch screen LCD - more on which in a minute - Panasonic has done its usual thing of providing a full smattering of physical controls to its right, although here some of the buttons are so tiny as to require fingertip precision.

Most prominent among them by virtue of being positioned top right is a dedicated Wi-Fi button, placing the feature to the forefront rather than burying it within menu options. We also get further controls for playback, exposure (+/- 2EV), screen display and Panasonic's regulation issue 'Quick Menu'.

As on previous models the Q Menu provides a short cut to key function settings by way of a drop down toolbar extending across the top of the screen display.

Using this control set we were able to turn GPS on or off, select stills resolution, ISO speed, white balance, select auto focus mode (including face detection and AF tracking for moving subjects), activate continuous shooting (of up to 60 frames per second, albeit at a reduced 2.5 megapixels) as well as specify video resolution and frame rate and adjust monitor brightness.

The final control on the backplate is the familiar four-way command pad that has flash, macro, plus self-timer options printed around its circumference, while at the centre is the standard-issue menu/set button. Give this a press and the various menu folders - for stills recording, video recording, GPS, set up and Wi-Fi - are presented as icon illustrated buttons.

We could use the command pad and set button to scroll through and pinpoint these, or just tap a finger on the screen to do the same - thus, as we've said in the past - we have a camera providing a best of both worlds operation that, rather than tripping you up or befuddling your brain, rapidly becomes second nature.

As there is no optical or electronic viewfinder, we're reliant on the rear plate LCD display for every aspect of the TZ40's operation.

Screen resolution has been boosted on the TZ40 to 920,000 dots, up from the 460k of its TZ30 forebear, which makes its 4:3 aspect ratio images when reviewed on the back screen immediately looks a cut above your average snapper in terms of sharpness and definition.

Like its predecessor the TZ40 again offers up touch screen control as an intuitive and useful adjunct to using its buttons and dial.

This means that as well as being able to casually scroll through collected images with a finger swipe as one would on a smartphone, in capture mode there's the ability to fire the shutter by tapping the glass (or switch this facility off with a further tap) and even control the optical zoom by rubbing a thumb up or down the right hand side of the screen.

The bundled battery has also been swapped since the TZ30, with the TZ40 offering a DMW-BCM13E lithium ion cell. As appears to be increasingly the case, this is charged within the camera via a USB lead and a mains adapter plug, rather than by way of a standalone mains charger.

Performance is slightly better this time around too, with up to 300 shots achievable from a full charge compared to 260 snaps granted by the TZ30, so no grumbles from us in this quarter.

Cramming a large number of pixels onto a fairly diminutive sensor can have the effect of rather visible image noise/grain as you progress up through the manually selectable light sensitivity settings, and this may well be one of the reasons that Panasonic has capped the user selectable options at ISO3200.

In terms of actual low-light performance though, pictures remain crisp, clear and clean up to and including ISO800. At ISO1600 we're getting some subtle grittiness to the image, but in truth this is only really noticeable if you're actively looking for it.

However ISO3200 is in comparison noticeably softer as noise reduction software processing kicks in, and the photo looks as if it's been covered by a painterly wash. Again, it's not to a degree that renders the image at all unusable, but it would appear sensible that Panasonic did not offer us an ISO6400 option at full 18MP resolution.

If you want to stretch creative boundaries in-camera, accessed via the artist's palette-like icon on the top shooting dial, the TZ40 offers a built-in Creative Control/Retouch function. This mode affords access to the digital effects filter likes of 'toy', retro, miniature and soft focus.

These are all fun to use - particularly the Expressive colour option if faced with rather dull conditions or a brightly coloured subject that you wish to render in even more dynamic fashion. Speaking of which, there's also the now ubiquitous High Dynamic Range function for shooting against the light, plus a pan-and-shoot panoramic shot mode.

The fallback is simply to leave the camera on intelligent Auto (iA) and point and shoot, with reliably consistent results achievable from shot to shot. Consistency and reliability are what the TZ40 and moreover the Lumix brand, are all about.

When shooting video, the TZ40's 20x optical zoom can be utilised and framing altered and adjusted once recording has commenced, the lens gliding slowly from maximum wide angle to extreme telephoto setting in six to seven seconds to minimise any minor mechanical noise from the zoom being picked up by the internal microphones.

As ever with a Panasonic camera, footage is clear and colour rich, which means it's flattering for human subjects.

Looking for one simple-to-use pocket camera with a creatively versatile zoom reach that will pretty much do it all? In offering a higher pixel count than its predecessor and newly adding Wi-Fi connectivity, the 18 megapixel, 20x optical zoom TZ40 is one of the more accomplished jack of all trades.

While in some ways its additions feel like a way of playing catch up with the rest of the 'travel zoom' market, the result is a snapshot camera that ends up a cut above.

So it should be, you may well be thinking, for a street price around the £330 mark. But, given that in return you'll receive a camera generating very few complaints indeed that includes all the best bits of Lumix cameras lower down the range in a hard wearing outer shell, this is money well spent.