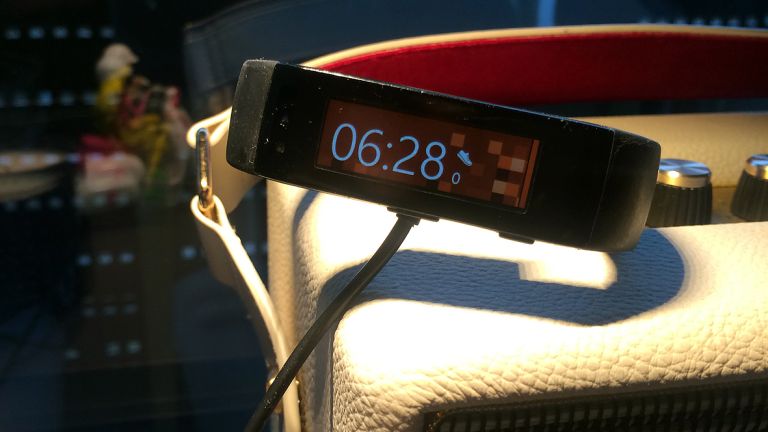 If anyone has made a more ugly and un-tactile fitness tracker than the Microsoft Band, I wouldn't want to meet it on a dark night.

However, it also happens to be an excellent fitness wearable - one of the best to date, in fact though it is really neither a classic, step-countingfitness trackernor arunning watch, nor a smartwatch. It's a powerful, fascinating - if flawed - hybrid of all three.

So, should you put aside your aesthetic reservations and splash the necessary £150/$180? Hmmm…

The first thing you notice about the Microsoft Band is that it's hard, unyielding and fastens with a metal clasp in a way that makes it appear you're on bail or day release. It's ugly, is what I'm saying.

But - ah! - the second thing you notice is that the screen is extremely bright and can be set to either be on all the time or only at the press of a button. Delving into the onscreen "menu", you find that the Band also does a LOT of stuff, with functions accessed via a long row of tiles.

The tile arrangement, in classic Windows style, is customisable so you can have what you want, where you want, and junk what you don't need. So if you like notifications to be the first thing you see, or UV levels (yes, really: there are a LOT of sensors in this thing) or tracking of your runs, cycle rides or workouts, that's all up to you.

The down side of the screen's brightness and the sheer range and power of the Microsoft Band's functions is that battery life is just two days. The charger is a proprietory one, but quite neat, attaching with magnets and juicing your Band up pretty swiftly. I found that by charging it each morning while shaving and showering the battery life could be extended to three to four days easily.

If you went without the Band's sleep monitoring functionality - and you really should; I actually think you'd need to be some sort of masochist to sleep in this thing - and charged it every night, that would solve that particular problem.

So this is where it starts getting good. Yes, it counts your steps with a reasonable degree of accuracy, and congratulates you for reaching 10,000. Just like every other fitness tracker.

But Microsoft Band also uses GPS to track runs and cycles without the need for your mobile. Interestingly, it can also sync with the likes of Strava and Runkeeper if you actively prefer to use your mobile's GPS.

GPS lock-on can be quite slow, but you can start running or riding while the Band is looking for a satellite. It's generally accurate once locked on, giving distance data that's not perfect, but consistent and good enough for most people's purposes.

There's also a heart-rate sensor. This doesn't tell you what HR zone you're in while working out - though obviously you can work it out yourself easily enough, if that's your bag - but the bigger issue here is less than rock solid accuracy. As with a lot of things to do with the Band, it's fine for intermediate exercisers, superfluous for anyone who's not very active and not really good enough for anyone who's an elite/hardcore/super-try-hard runner or cyclist.

That's not really meant as a criticism, though. Surely most of us are intermediates when it comes to exercise? Even if we sometimes pretend not to be…

The Microsoft Band also tracks your heart rate when you're not exercising, so you can keep an eye on your resting heartrate over time - if it's generally going down, you're probably doing alright. It also means the Band's app is able to have a stab at estimating your recovery time after exercise, although I have to admit I took zero notice of this.

The REALLY useful thing the Microsoft Band does is its Guided Workout function. This is for any form of interval training, with a large number of preset workouts available to download to the Band, graded by intensity. Fire it up and your Band counts down each interval, buzzes to indicate each one has finished and offers onscreen instructions as to what happens next ("30 seconds rest", "Star jumps for 20 seconds", "Pressups for 40 seconds", "Simon says 'stand on your head'" and so forth).

This is a great idea, executed really well. I'd go so far as to say it's the Band's killer app, in fact.

Oh, and there are also a skin temperature sensor and a galvanic skin response sensor. They don't appear to do anything at this point though conceivably they could be useful in the future, if Microsoft decides to use them.

Because of its HR monitor three-way accelerometer and gyroscope, the Band is a very solid sleep tracker too, able to pull out stats on deep and light sleep, plus "sleep efficiency", whatever that is.

As usual with this type of device, I question what you're meant to do with these stats, but putting that to one side, there's a greater problem here. Which is that because the Microsoft Band is a) stiff enough to be a little uncomfortable and b) in need of regular charging, in my view you'd be much better off just taking it off and plugging it in.

The Band's mobile app for iOS, Android and Windows Phone isn't bad but it's the desktop one at microsofthealth.com that's probably of most use. Here you can see all your steps, runs, workouts, etc with stats on calories burned, suggested recovery times and more. It's good, and useful if you know what you're doing, but would really benefit from MIcrosoft offering some actual advice and help based on all this bio-data its collating from you.

Some of the more data shown includes estimates of "cardio benefit": whether the exercise you did maintained or improved your overall health. As noted, the app doesn't say, "Do more of this," but if you're a keen graph scrutineer, you can draw your own conclusions.

For all its quirks and shortcomings, the Microsoft Band is an excellent hybrid device in many respects. It's useful for tracking your workouts, serves as a solid step/sleep counter and the Guided Workout feature is really good.

What really adds value is that it's also got decent smartwatch type functionality, with phone alerts, texts and messages all pinging up on the bright little screen. If you've got a Windows Phone device, you can do much more, including taking calls and dictating messages via Cortana, via the built-in mic.

Although it's ugly and stiff, it's not actually all that uncomfortable - it doesn't leave contusions on your skin or anything like that.

A lot of users would benefit from its fitness functions, which are way above what most step trackers offer. In fact, despite its appearance the Microsoft Band is actually more like a running/fitness watch, with GPS and pulse tracking. It doesn't have the accuracy of the best running/fitness watches but for athletes of only moderate seriousness, it's fine, and it's also significantly cheaper and more discreet than most such watches.

It also has a wealth of golf-related functions, from course mapping to swing analysis, courtesy of a tie-up with TaylorMade. Though sadly I have not had the chance to test these, due to hating golf.

In short, the Band is an impressive hybrid. It's over-stuffed with sensors, unattractive to look at and not always the last word in accuracy, but it does a lot of things well. At the very least it's a FAR better device than it looks. Even on this unicorn's horn.