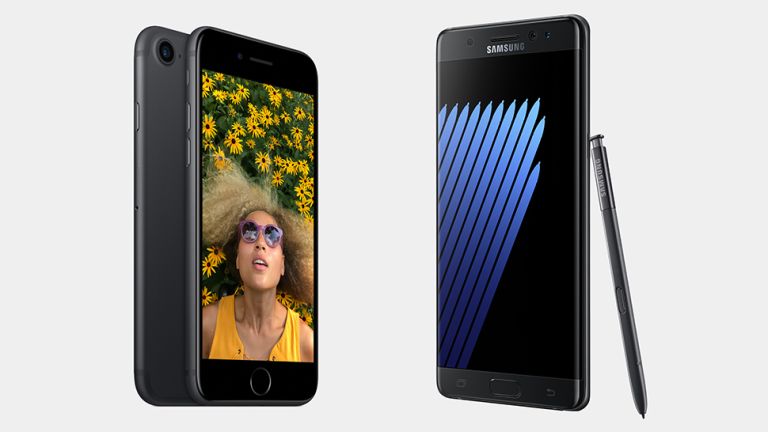 Unless you've been living under a rock for the past few months you must've noticed that we've got two much-anticipated flagship smartphones arriving in the very near future: the iPhone 8 from Apple in September and the Galaxy Note 8 from Samsung in August.

It's the old tech foes, Apple and Samsung, head-to-head again, and for this particular round we think the South Korean company might just have the edge - not only because it gets to go first, but because it could have some tricks up its sleeve that Apple can't match.

The timing of the launches

Samsung has already planted a marker in the ground with an Unpacked event scheduled for the 23rd of August, and if you want to steal the spotlight away from something or someone else then it's usually a good idea to get in first. Apple hasn't yet confirmed either the existence of the iPhone 8 or a date for the launch event, but if it sticks to tradition we can expect to see a new phone or phones from Apple in the first half of September.

Don't forget the history here either - as disastrous as the Galaxy Note 7 fiasco was for Samsung, it does mean there's a lot of pent-up demand for a super-sized Android phablet with a stylus, demand that the Note 8 is poised to tap into

As for the iPhone 7 and the iPhone 7 Plus, they've been selling by the bucketload, as iPhones usually do. While the rumour mill suggests Apple is going to be pulling out all the stops for the tenth anniversary of its flagship smartphone, it's also worth bearing in mind that there are millions of users who are perfectly happy with their current iPhone, and won't be able to afford an upgrade for a while yet.

The features of the Note 8

Nothing we know about the Galaxy Note 8 is official of course, but the leakers and tipsters of today are usually pretty on the money when it comes to predicting the features that smartphones are going to have ahead of time. In the case of the Note 8, it looks like there's a lot to look forward to, following on from the excellent Samsung S8 and S8 Plus.

To start with we're expecting a huge and presumably gorgeous-looking 6.4-inch display, following the 18.5:9 aspect ratio, bezel-busting Infinity Display template now preferred by Samsung. The screen is also tipped to be one of the first on the market to come with a 4K resolution - that's a mind-boggling 3,840 x 2,160 pixels, or 688 pixels-per-inch.

On top of that the rumours suggest a dual-lens camera boasting an impressive 3x optical zoom, as much as 6GB of RAM combined with a state-of-the-art processor, an iris scanner, and a speaker built into the stylus, maybe to read your notes back to you. Considering that Samsung is also likely to maintain its lead over Apple in VR, that's a very appealing-looking package for the Note 8 to tempt buyers with.

The problems of the iPhone 8

Take a glance at any of the iPhone 8 rumours that have been swirling in recent months and it's clear that Apple is aiming high for its next handset, which might appear alongside more minor updates in the form of an iPhone 7S and an iPhone 7S Plus. This is the tenth anniversary of the original iPhone, after all.

What's also clear is that these lofty ambitions that Apple has are causing a few problems in the supply chain. It seems to be touch and go whether Apple will be able to work out how to embed the Touch ID technology under the display in time for the iPhone 8's big reveal (it may get moved to the back or the Sleep/Wake button instead), and we've seen persistent talk that the iPhone 8 will be available in very limited quantities to begin with as Apple looks to iron out various production difficulties.

It doesn't matter how impressive your phone is if you can't get them made fast enough to fulfil demand - just ask Google - and at this stage it would be surprising if there wasn't some kind of delay in the iPhone 8 on-sale date, which would again help Samsung.

The battle between Samsung and Apple

These two tech titans have been locking horns for a long time now and after a period of Apple ascendency it feels like Samsung is finally getting its act together again. From where we're standing the launch of the Note 8 looks set to carry on that momentum.

The iPhone 7 and the iPhone 7 Plus aren't bad phones at all - in fact they're very good - but Samsung genuinely raised the bar with the Galaxy S8 and S8 Plus this year, with the shrunken bezels and overall design of the phones making Apple's efforts suddenly look rather dated (to be fair, the launches were five months apart). If they can follow it up with an equally spectacular Note phablet then Apple is going to have to have something very special up its sleeve to grab back the headlines and avoid getting overshadowed.

We don't think Apple is going to take a complete beating over the next couple of months, and we're sure that the iPhone 8 will sell very well, if Apple can make enough of the phones to keep up; but when the final assessment is made on 2017, we may well be calling it as Samsung's year.