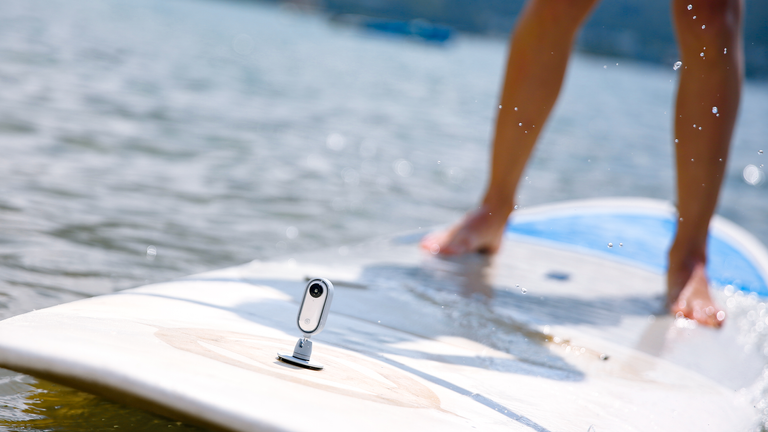 The new Insta360 GO claims to be the world’s smallest stabilised video camera. It is designed to be worn – or attached to just about anything – and shoot in 1080p HD.

Once you have shot your video, the camera sits inside a charging case, which is paired with your iPhone or Android smartphone, where it can wirelessly beam footage to your device, ready to be edited and posted to social media, or sent to group chats with friends and family.

There are a range of shooting modes to pick from; standard, interval shooting, slow motion at 100 frames per second, and time lapse turning up to 30 minutes recording into five minutes of video.

Using what the company calls FlowState technology, the camera features a six-axis stabilisation system designed to keep your footage smooth. The company suggests the camera can be clipped to a hat or t-shirt to create point-of-view videos, but with the bumps of walking ironed out.

A main focus of the camera is to record the highlights of your day, rather than catalogue everything with hours of unusable footage. As such, the GO only records 30-second snippets of video at a time, which are then available to load into the free FlashCut app, where footage can be quickly edited on your smartphone or tablet and shared on social media.

The emphasis here is on speed, and the ability to shoot, edit and share your footage in just a few taps - but also for the video to be smoother and of better quality than what your smartphone is capable of.

Insta360 says the GO’s battery and charge case combined can manage around 200, 20-second clips per day. These are stored on the camera’s 8GB of onboard storage.

The GO has a magnetic body and comes with a range of accessories, including a clip, magnetic pendant, pivot stand, and a mount for sticking to anything you like. Insta360 even suggests the GO would survive while stuck to a surfboard - and on that note, the camera has an IPX4 water-resistance rating.

Insta360 is pricing the GO at $199.99, which is half that of the latest GoPro Hero5 Black, and $150 less than the DJO Osmo Mini, which uses a drone-style gimbal to keep its footage steady and smooth.

If the GO’s stabilisation can match up to the software of the GoPro and hardware of the DJI Osmo, then it could be a seriously competitive (and tiny) go-anywhere action camera.