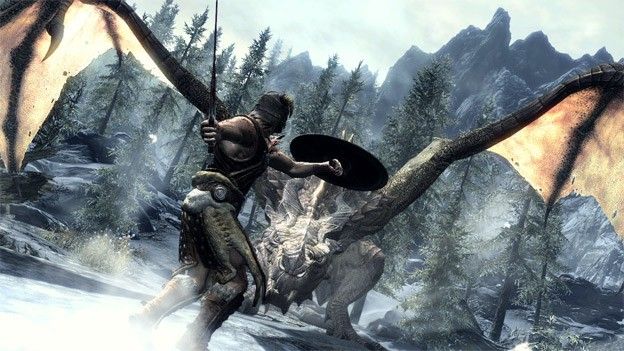 All the latest Elder Scrolls 6 rumours rolled into one, from its suspected release date to ideas and the location at which it's expected to be set

The trailer and images in this article are of Elder Scrolls V: Skyrim

The Elder Scrolls V: Skyrim was one of 2011's most critically acclaimed video games – it was even awarded one of T3's rare 5 star reviews - shipping over 10 million copies in its first month alone.

In fact its creators, Bethesda, have recently announced an online version of the game, The Elder Scrolls Online, such is the success of the role-playing series.

Although we may not be seeing it for some time, rumours surrounding the launch of the sixth Elder Scrolls title have already emerged.

We round up the latest news, rumours, trailers and ideas for what's sure to be another PS3 smash.

In the last couple of days, Bethesda has released a couple of baffling teasers on the Vine. Naturally, this has caused the rumour mill to go absolutely beserk and media and players alike are specualting about what the footage could signal on internet forums.

The majority of all of this heated theorising points to a brand new Fallout game, but it's not beyond the realms of possiblity that the teasers could herald the arrival of the Elder Scrolls 6. Only Bethesda know at this stage - and they're not saying. Watch this space.

Alas, there's been no official word on when the sixth TES will land. Why? Simply because it doesn't exist – well, not yet anyways.

However, a recent job posting on the Zenimax website - Bethesda's publishing arm - called for experienced applicants to work on an 'unannounced game'.

It read: “Bethesda Game Studios is looking for experienced programmers to work on cutting-edge technology for an unannounced game on future-generation consoles.”

Could it be The Elder Scrolls 6?

The ad expressed interest in developers with 'extensive experience' in 'programming and optimizing for the Xbox 360 and PS3', suggesting that the lucky candidate could be jazzing up Bethesda's current engine as opposed to creating a new one, according Official PlayStation Magazine.

Even if the advertisement was referring to Skyrim's successor, it could be a while before it finally hits shelves.

Elder Scrolls 3: Morrowind landed in 2002, Elder Scrolls 4: Oblivion was released in 2006 and its follow-up, Skyrim, officially launched at the end of 2011. Annoyingly, we could be kept waiting up to five whole years for the sixth version of the game.

As a result, TES 6 is likely to be developed for the next generation of consoles - the Sony PlayStation 4 and Xbox 720, which should pave the way for more progressive enhancements than in the previous five titles.

Back in February this year, Bethesda game director Todd Howard told Rock Paper Shotgun it was "gonna be a while" before any announcements would be made in regard to future games.

Although not confirmed, it seems likely that the Elder Scrolls 6 will be set in the now familiar continent of Tamriel, as was the case with all previous titles before it.

A ballsy angle the game's developers may take is to completely move the series away from the continent of Tamriel altogether.

Should Bethesda decide to send us to the continents of either Akavir or Atmora, it could provide the game's creators with the platform they desperately need to introduce a catalogue of new landscapes, characters and weapons arsenal.

Many TES fans are keen on the idea. In a discussion on a Skyrim forum, one fanboy wrote:

“I like the idea of different province starts for different races. To make a TES game with level of detail of Skyrim, but Tamriel wide, would be HUGE undertaking. If it exists in the future, it would be awesome.

“Another possibility is having the next game located in a certain province but having start locations vary depending on your race. You could also have race specific quests or even factions.”

Another wrote: “All of Tamriel would be awesome, Morrowind again would also be awesome but hopefully they'd actually include the part of Morrowind attached to the mainland. My personal choice of Hammerfel though.”

The next generation of consoles would make the possibility of the game being set across the whole of Tamriel wholly achievable.
It would also allow players to begin their adventures in different provinces - depending on the race they choose - for their character at the start of the game.

For example, should you choose Imperial as your race, you would begin your quest in Cyrodiil, the homeland of the Imperial people.

We're yet to hear of any further rumours on the location for Elder Scrolls 6 but will keep you updated as and when we do.

Elder Scrolls 6 is likely to be the sequel to Elder Scrolls V: Skyrim as opposed to the online version (like, duh!), but whether it will draw its roots from its predecessor or vaunt a story in its own right remains to be seen.

Given that the plots in the previous five titles were completely unrelated, a direct sequel will come as a complete shock to fans.

However, previously in the series, the titles have run in chronological order, so Elder Scrolls 6 is likely to be set ahead of the events in Skyrim.

Gaming nuts have already taken to forums all over the gaff to put forward their ideas. Here are the ones we loved most….

By user OccupySkyrim: “Ok, so I was thinking (me being a Khajit fan and all) that they should make The Elder Scrolls VI: Elsweyr. Now I know that Elsweyr was already explorable in Arena. But Imagine how much bigger, and how much more beautiful it can be than it was in Arena!

"I just think the next one should be in Elsweyr because I like Khajit's and with the technology we have in this century, it can be much more grand!”

One commenter replied: "I have a better I idea, make Elsweyr a bit small and a vale between Elsweyr and Black Marsh, so its a game that is no longer mostly in control of Nords and Imperials, but Argonians and Khajits, so now its better for Argonian and Khjits fans."

Another said: "I think they should do a time travel thing and send you back in time when the Dwemer existed, they could even set it still in Skyrim and have all the Dwemer cities as proper cities and not ruins.

“The main plot eventually ends up destroying the Dwemer :(. And possibly travel to Vvanderfell from Skyrim to do it."