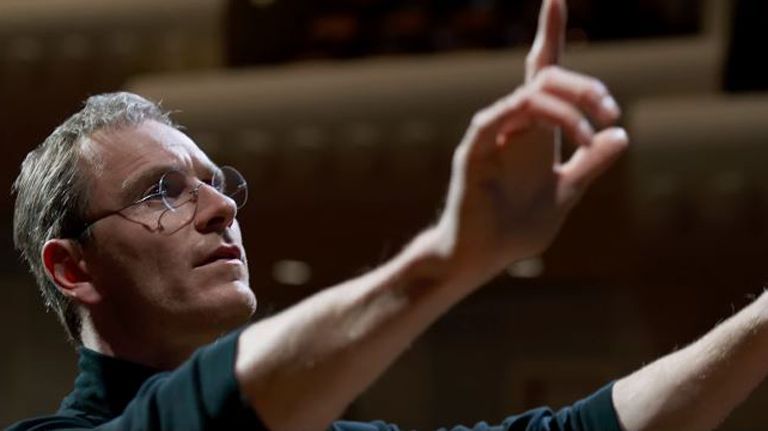 This is the first film about Steve Jobs we took seriously: after all, it was written by Aaron Sorkin (The Social Network, The West Wing), directed by Danny Boyle (Slumdog Millionaire, 127 Hours), and starring Oscar winner Kate Winslet and Oscar nominee Michael Fassbender. Its concept is intriguing, too – it's based around three scenes, each running in real time depicting the half hour or so before one of Jobs' big keynotes.

The first is in 1984, before the unveiling of the Macintosh; the second in 1988, with the introduction of the NeXT “cube”; and the last in 1998, with the reveal of the iMac. The result is more like a play than a traditional movie (compounded by the fact that everything is set in theaters and opera houses), and is sharp and energetic. It's a great movie on its own terms. But we're not as sure whether it's a good Steve Jobs movie.

In some ways, it's Jobs' mythos distilled to its purest parts, in its simplest narrative: the rise and fall and rise. We see a man who's capricious, terse, and impactful. One who lashes out with cruelty, but is prone to his tender moments. One who demands perfection, and doesn't let up on it even when impossible. From the stories of Jobs, this sounds like a reasonable portrayal – but while the broad strokes are fine, it's the details where it stumbles.

We see Jobs being an asshole because he just has to be right, but we don't see much evidence of him actually being right when he's being demanding. It feels like the myth of the Reality Distortion Field sometimes takes over the film – that he's in a state of self-delusion all the time, rather than someone who sometimes is pushing for the harder path because he's certain it's the best one.

For example, there's a scene about Jobs having looked through dozens of photos to find the ideal shot, with the joke being that no one but him can tell the difference between them – and that's it. There's a great opportunity to explain what he saw that made that picture better, and talk about why details matter. Instead, we just get the idea that he's needlessly picky, without any of his reasoning. Similarly, the dialogue doesn't always feel like Jobs – though it's largely excellent and engrossing, it's frequently very much Sorkin's voice, rather than something you imagine the characters saying.

The emotional center of the film revolves around the relationship between Jobs and his daughter, Lisa (and, to a lesser extent, with Lisa's mother, Chrisann). Some have said that this shouldn't be such a focus – that it's not what the man was about. But it's myopic to suggest that only Apple, only products, would be relevant to painting an image of Jobs' life in this period. His refusal to acknowledge Lisa is the cruelest side of him, and laces his barbs in the film towards her or Chrisann with an extra layer of venom.

It's interesting to contrast this with his attitude towards Steve Wozniak, whom he can't help but love even when they're in opposition; or Sculley, with whom he has a kind of kinship even when their relationship becomes fraught. Only Joanna Hoffman exerts any control over him, and you can see why: she's a great immovable object to his unstoppable force, even if she feels a little like she exists only to be Jobs' conscience in the film. Woz suffers from something similar, but worse – he feels almost entirely superfluous, as though he's just there because you can't have Jobs' story without him.

Tim Cook said that this film doesn't represent the man he knows, though perhaps the counterargument is that Cook barely knew the man portrayed here – Cook and Jobs didn't meet until 1998, shortly before the film's final act. But maybe that's irrelevant – truth in art doesn't require verisimilitude. Steve Jobs comes across more as a historical drama than a biopic – more concerned about giving you an overall impression than getting chronology or character exactly right. It admittedly feels a bit strange to take that approach when the film includes people who are still alive to comment on it, but it also probably produces a better movie.

If you'd hate seeing the details massaged like that, maybe it's not the film for you. But, with the right expectations, it's an pacey, interesting story about a very complicated man.

This article originally appeared in Mac:Life.