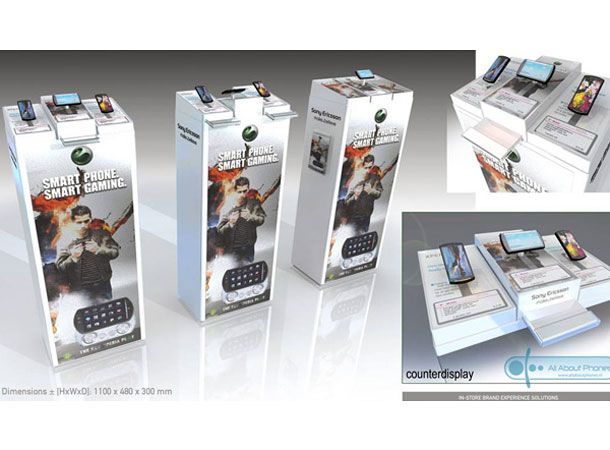 PSP Phone outed yet again ahead of MWC unveiling

Will any aspect of the long awaited PSP Phone remain a mystery come its expected official unveiling at the upcoming Mobile World Congress later this month? If the fleet of PSP Phone tipsters have their way then no as retail display booths for the upcoming Sony Ericsson Xperia Play handset are leaked online.

Previously known as the PSP Phone the newly dubbed Sony Ericsson Xperia Play is believed to be preparing for a grand and official unveiling the night before MWC 2011 kicks off with the company pencilling in a Barcelona-held press conference for 7pm on Sunday February 13th.

Proclaiming “Smart Phone, Smart Gaming” the in-store retail plinths offer no new information on the device that has already been photographed, videoed and even given full hands-on reviews despite having yet to be confirmed by its manufacturers.

With the expected unveiling just over a week away it is unknown when the Xperia Play and its new retail booths are likely to hit UK stores and at what price the device will be available to wannabe users. Compatible games for the gaming-centric smartphone also currently remain a mystery.

What games would you most like to see landing for the PSP Phone, sorry, Xperia Play handset? Let us know via the T3 Twitter and Facebook feeds.