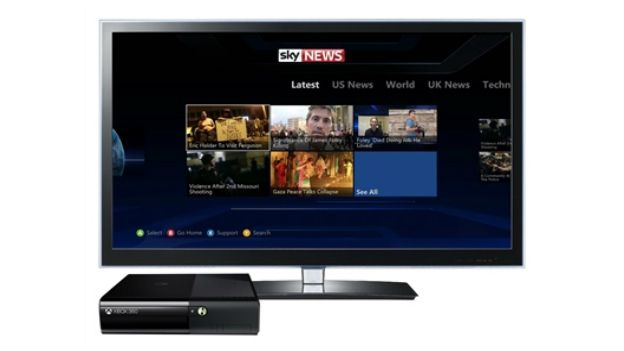 You'll soon able to get your daily news intake on your Xbox 360, erm...but not your Xbox One just yet.

Sky has announced that its launching a Sky News app on Xbox Live on September 9.

The news corporation already offers its news service on Apple TV, Roku and Livestation but aims to grab a larger chunk of the market via Microsoft's gaming platform.

There is a slight drawback however, for the meantime it seems the Sky News app will be Xbox 360-exclusive.

Sky has said there is no Xbox One version at this stage: "We are continually looking at other connected devices in the market but don't have any firm dates yet."

This may come as frustrating for anyone already on the next-gen hype, but chances are it will come to the Xbox One in the not-too-distant future.

The Sky News app will appear on Xbox Live for Xbox 360 users both in the UK and in the US.

Sky believes the app will help it get more viewers in the US where it's less accessible than in its UK home.

Andrew Hawken, head of Sky News Digital, said, "Sky News is consistently exploring opportunities to expand our global reach. Making Sky News available on Xbox was an ideal way to achieve this. With a growing US footprint of a million users and a US news team, we're thrilled that our coverage will be showcased to millions of Xbox customers."

When you switch on your 360, the Sky News icon will appear on the homepage and can be clicked into for 24-hour news coverage.

Not only will the app offer a live feed but it will also have a selection of on demand stories that update throughout the day.