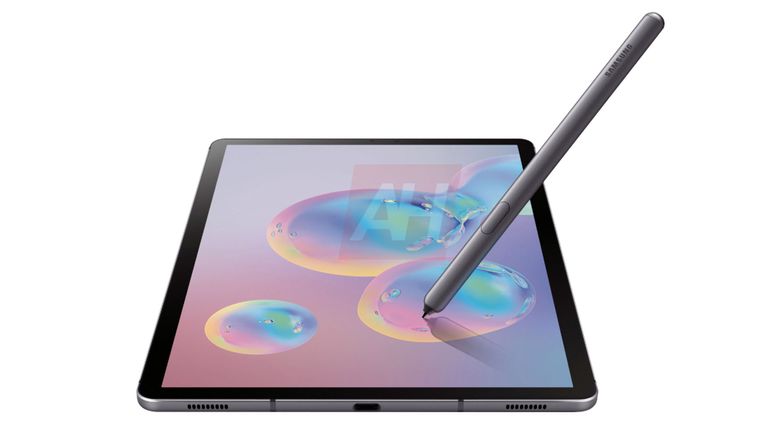 The feverishly-anticipated Galaxy Note 10 might not be the only new high-end gadget unveiled at the next Galaxy Unpacked keynote event on August 7 in New York City, according to the latest leak.

Samsung looks set to announce a new flagship table to take on the Apple iPad Pro, purportedly dubbed Samsung Galaxy Tab S6, with minimal bezels, a dual-camera on the back of the device for Live Focus images, and four AKG-tuned speakers.

So far, nothing unusual. However, there is one very unusual design supposedly coming to this new tablet and it's all about storing the bundled S Pen stylus.

The stylus, which uses the same technology as the smaller S Pen included with the Galaxy Note series, doesn't have a cut-out inside the body of the device to keep it safe – unlike the latter, but will instead sit in a small recess on the back of the tablet.

The groove is found underneath the dual camera system and will seemingly hold the S Pen in place using magnets. It's unclear exactly how deep the recess is – and whether it'll be enough to stop the stylus being accidentally knocked out of its perch every time you drop the tablet into your backpack, or slide into the pouch on the back of car and aeroplane seats for safe-keeping.

Unlike the S Pen included with the Galaxy Tab S4, the new variant is rumoured to supported wireless charging when attached, which is very useful. This is very similar to the wireless charging system introduced by Apple with the redesigned iPad Pro last year, which lets users snap the Apple Pencil to the side of the chassis to sync and charge the stylus. There is no visible recess used in this method, just magnets.

Stylus aside, the Galaxy Tab S6 looks set to be a very competent tablet. Rumours point to the productivity-focused tablet sporting a 10.5-inch high-resolution display, the latest Snapdragon 855 chipset, 6GB of RAM, and 128GB of built-in storage. It's unclear whether this will expandable via MicroSD.

Previous whispers had pointed to Samsung using an OLED screen rather than LCD on the next-generation tablet, although it's worth taking that with a pinch of salt.

Leaked images of the tablet published by Android Headlines reveal a choice of three colours, which are all colour-matched with new S Pen. It also confirms that charging and syncing will be handled via USB-C, as you'd expect from a flagship tablet.

Unfortunately, that USB-C port will also have to handle any wired headphones you want to use with the tablet too, since it seems Samsung will follow in the footsteps of the iPad Pro and ditch the once-universal audio port from its latest tablet.

Finally, there's no sign of a fingerprint scanner on the tablet in the new leaked images, which suggests the in-display ultra-sonic sensor seen on the Galaxy S10, Galaxy S10 Plus and Galaxy S10 5G could make the jump to the tablet range for the first time. Either that, or Samsung has quietly cooked-up a facial recognition system for the tablet to rival Face ID on the priciest iPad models.

Fortunately, there's not long left to wait before we find out. Samsung will hold its next Galaxy Unpacked hardware showcase on August 7, so stay tuned.