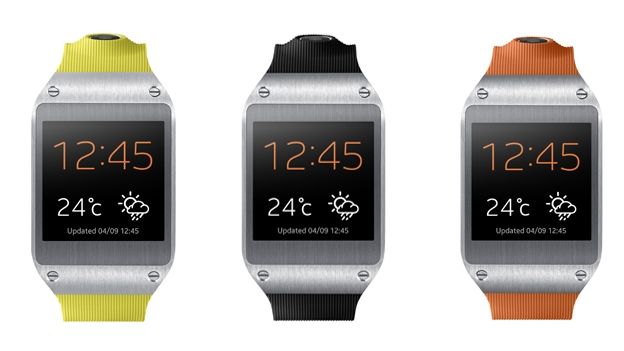 The Samsung Galaxy Gear is now official, taking on the likes of Sony's SmartWatch 2 and the range of fitness trackers like the Jawbone UP and the FuelBand

The Samsung Galaxy Gear has been officially unveiled at IFA 2013 during the Samsung Unpacked event. The Galaxy Gear will launch sporting a 1.63-inch AMOLED display and the ability to take pictures, record video and track your fitness sending it all to a smartphone like the Galaxy S4.

Unveiled alongside the Samsung Galaxy Note 3, the Galaxy Gear comes with a 1.63-inch 320 x 320 AMOLED display and features a 1.9MP camera which can shoot quick video and take photos.

Designed as a companion for Galaxy devices the Galaxy Gear comes with many of Samsung's own software features including S Voice letting you answer phone calls, take down memos, set calendar dates and dictate texts via the Galaxy Gear to the smartphone.

Evernote have designed a tailor-made Evernote Watch app which lets you take audio and visual notes using the twin microphones or the 1.9MP camera.

Or if own-brand is more your thing then Samsung's own Memographer will let you record short videos, take images or record notes to the Gear's 4GB of internal storage.

Of course media is catered for with the Gear functioning as a remote control for your Galaxy smartphone letting you choose tracks, play/pause and change the volume.

The Gear also features some new security elements including Auto Lock which will automatically lock your smartphone the moment it gets more than 1.5m away from the Gear creating a handy anti-theft deterrent.

For the fitness conscious Gear happens to come with a built-in accelerometer and pedometer which means it'll record steps-taken, calories burned and distance covered sending all the info via MyFitnessPal or RunKeeper.

The Galaxy Gear will be going up against the Sony SmartWatch 2 and if the rumours prove to be true, the Apple iWatch could arrive in the next 12-months.

The Samsung Galaxy Gear UK release date has been set for September 25th alongside the Galaxy Note 3 and will come in a range of colours including Jet Black, Mocha Gray, Wild Orange, Oatmeal Beige, Rose Gold, and Lime Green.