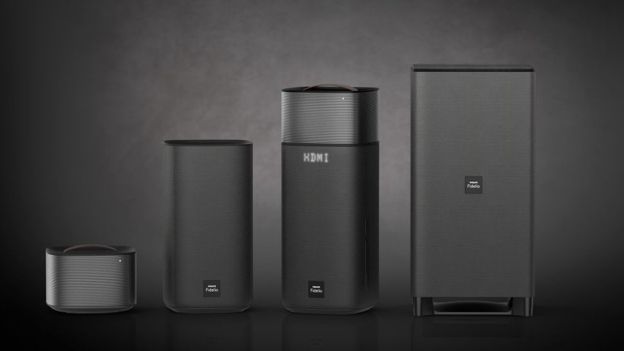 Philips Audio can't be accused of standing still in the competitive sound stakes after unveiling a range of innovative speaker solutions at IFA 2015 that cover all the bases.

First out of the blocks is the new Fidelio E6 Wireless Surround Cinema Speakers that offers a surround sound experience without annoying wires getting in the way and causing clutter.

The system is made up of two 40cm tall front speakers that are plugged in and have a pair of detachable top sections that can be removed and placed anywhere around the room in order to achieve 5.1 surround sound. Fidelio E6's Spatial Calibration algorithm ensures this works in perfect harmony and delivers balanced sound.

It has three-inch drivers dedicated for the centre channel in the front speakers and they are designed to deliver to best 5.1 channel sound possible. The cinematic grandeur of the setup is further enhanced by a wireless subwoofer and it has HDMI inputs to allow for full 4K pass-through.

It isn't just a home cinema surround system either. Users can connect up to three Bluetooth devices simultaneously and it has built Google Cast and Spotify Connect that boost playback from the cloud. Those detachable speakers enjoy up to five hours of playback and once out of life can be plugged back in for a quick re-juice. Priced at €899.99, the system will be out by the end of the year.

If surround sound isn't your bag, Philips has also pulled the covers off a trio of 3.1 channel sound bars that come with an external sub woofer and a specifically positioned driver dedicated for the centre channel to bring the best voice clarity possible.

Top of the range is the HTL5160B the can stream music from the cloud using Google Cast or Spotify Connect, offers 320W of power and costs €349.99. The HTL3160B has a smaller 200W footprint, like its sibling can offer wireless streaming using Bluetooth and costs just €229.99. Lastly, the HTL2183B offers just 150W of power and with its lower spec sheet costs €169.99.

Finally there is an update to the Wireless Izzy Speakers range in the form of the Izzy BM5 and BM50 speakers. Izzy BM5 comes in three colours and brings two 2.5-inch drivers and a bass port for a deeper low end. Each speaker can be used alone or paired with four other Izzy speakers.

The Izzy BM50 offers a little bit more in the shape of radio and USB playback plus Bluetooth streaming from smartphones and tablets. Both speakers are out in Europe in the autumn with the Izzy BM5 retailing at €129 and Izzy BM50 at €279.