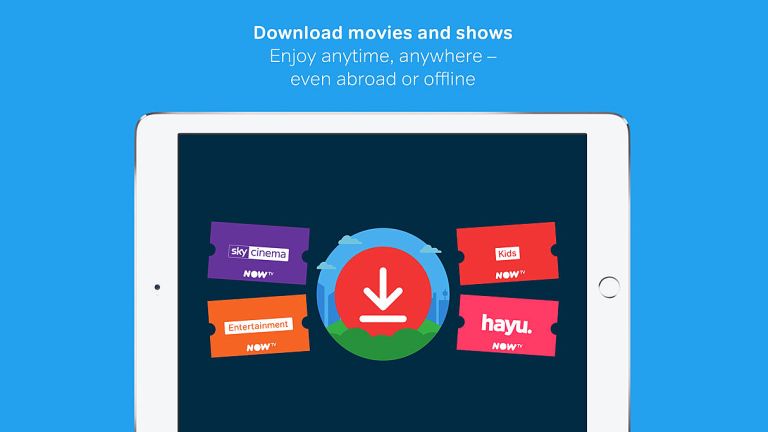 Now TV subscribers are now able to download films and television shows to watch when their chosen device does not have an active internet connection. The all-new functionality is available across the Sky Cinema, Hayu and Entertainment passes.

The feature was first announced alongside the Now TV Streaming Stick on January 25, 2018 with a vague pledge that it would become available "by the end of the year" – a self-imposed that Now TV missed by a pretty hefty margin.

Late last month, Now TV started to roll-out the ability to save on-demand content to iOS and Android devices. There are a huge number of reasons that you might be unable to stream content to your smartphone or tablet, including commutes on underground trains, flights, and holidays abroad.

Speaking to T3, a spokesperson for Now TV said: “Now TV content is now available to download for the first time through the Now TV app.

"You can download content on all iOS and Android devices compatible with Now TV for on-the-go viewing. Any customer can manually download an updated version of the Now TV app from today in order to get access to the Downloads functionality."

The Apple App Store listing for the Now TV app has been updated with a screenshot that advertises the ability to "download movies and shows: enjoy anytime, anywhere – even abroad or offline". However, the Android version of the app on the Google Play Store still only advertises the ability to download Kids shows, a feature that has been available in the app since last year.

To download films, reality TV shows and box sets to watch offline, you'll need to make sure you have the Now TV app installed on your iOS and Android device.

Navigate to the show or film you'd like to watch offline. If there's a download icon in the top right-hand corner of the info screen, tap it to save the video to your device.

After you've downloaded a show or a movie, you'll have 30 days to start watching.

Once you've started watching, you can watch as many times as you like for 48 hours before the end of the 30 days and your download is deleted. Any downloads saved to your smartphone or tablet will be removed as soon as you sign out of your Now TV account on that device.

There are also some minor restrictions on Now TV downloads. For example, you're only able to download the same episode of a show twice. After that, you'll be unable to watch the episode offline.

Now TV subscribers are also only able to watch the downloaded shows on the device where they were originally downloaded – there is no ability to transfer downloads onto any other devices.

Be warned – Sky doesn't have the rights to offer downloads for every show on its Now TV service, so the download icon will be greyed out on some content.