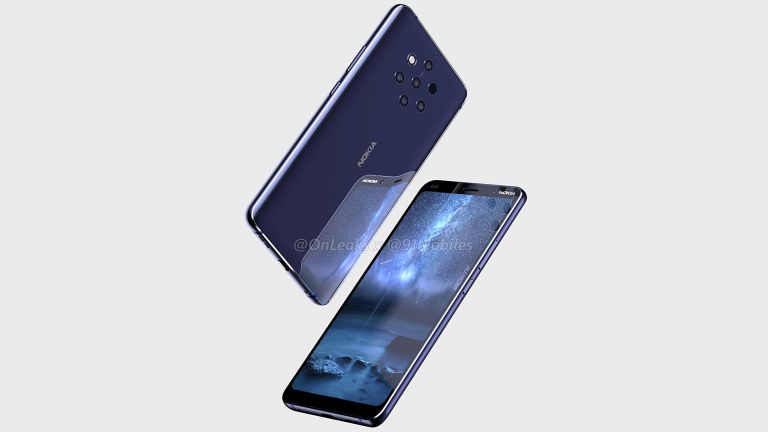 Nokia 9 looks set to mark an important milestone in the race to squeeze an ever-increasing number of camera lenses onto the back of high-end smartphones – the first penta-camera system. For those whose Ancient Greek is a little rusty, that means the Nokia 9 will have five separate lenses crammed into its circular camera module.

Reliable Twitter tipster OnLeaks has worked in collaboration with 91Mobiles to produce a three-dimensional render of the as-yet unannounced Nokia handset.

OnLeaks is well known for crafting these high-resolution renders based on the intimate knowledge of detailed factory CAD models. These are computer-generated representations of a product used by designers during the creation of a new product and often sent to third-parties to enable them to design cases and accessories.

According to the Nokia 9 leak, the next-generation handset will arrange its five camera lens in a circular arrangement along with the LED flash, as well as a mysterious black sensor. Unfortunately, we don't know what each of the cameras will do.

However, should Nokia follow the likes of the quadruple-camera Samsung Galaxy A9, expect to see a main shooter coupled with a telephoto lens for optical zoom, as well as a depth-sensing sensor to blur backgrounds in portrait photos, as well as a wide-angle lens for a wider field of view. We wouldn't be surprised to see a monochrome camera for Leica-style black-and-white shots, like the Huawei P9, either.

Elsewhere, the Nokia 9 looks set to sport a metal and glass frame. On the front, there is a notchless 18:9 display and single selfie camera.

Based on these renders, the handset appears to be missing a fingerprint scanner, which suggests that Nokia 9 will embed the sensor beneath the glass display, following on from the likes of the Huawei Mate 20 Pro and OnePlus 6T.

Little else is known about the Nokia 9, but we'd expect to see a Qualcomm Snapdragon 845 under the bonnet with at least 6GB of RAM. It's also likely to use an OLED display, since this technology is needed for in-display fingerprint sensors.

We'll keep our ear to the ground for the latest whispers on the Nokia 9, so stay tuned for more updates soon.