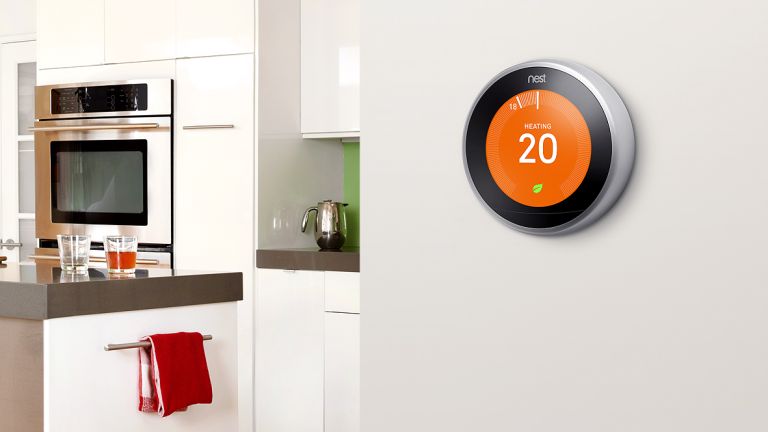 Now, we're not going to claim that a thermostat is ever something you should get excited about, exactly. However, it must be said that thethird-generationNest Learning Thermostat is an enticing thing. It has the same sexy look - hubba hubba, that's one sexy thermostat, oof! - as ever, and is now suddenly much more useful for a lot of UK users.

That's because it now controls your hot water as well as your heating, if you've not got one of those new-fangled combi boilers, yet costs the same to buy and install - it's £199 for the unit alone, or £249 for the unit plus installation. You can also pick up a stand for it, for £29.

• Check out our current list of the best smart thermostats

As with heating, hot water can now be easily scheduled, or turned on remotely, while the auto away function kicks in to save energy and money, when your Nest notices you've been away for two days or more.

Also important technically is the addition of compatibility with OpenTherm. This allows for more precise control of the amount of gas burned to reach a given temperature, rather than simply allowing 'on' and 'off' states. This should mean greater fuel economy.

Less useful but perhaps more enticing to techies is that the bezel has shrunk, leaving thescreen 40 percent larger. It also boasts25 percent morepixels per inch than its predecessor, with229ppi. Despite this, the new Nest is the same diameter as before, and slightly slimmer, so it can be that bit more flush to the wall.

The larger screen also brings a new tech toy to play with: Farsight. This allows key info like temperature to be seen from across the room in larger fonts - you can also choose to have a digital or analogue clock face - and detects that you're moving towards the thermostat, so more detailed info comes up as you approach.

The previous generation Nest will be phased out, to ensure the product line is as simple as possible, thus avoiding consumer confusion in Homebase. At the device's launch, Lionel Paillet,EuropeanGeneral Manager, said the first new Nest installations would be taking place by December, with an intended waiting time of "no more than a week." He also claimed the thermostat's energy-saving qualities should see it pay for itself, "Within a year."

As ever, the Nest Learning Thermostat interoperates with Nest's other products (the Protect smoke alarm and Nest Cam, er, camera) as well as those from dozens of third parties.

While Nest is proudest of the way its Thermostat learns your behaviour and adjusts the way it heats your house accordingly, for us its most pleasing elements are the ability to turn it on via your smartphone, from the bus, and the intensely pleasing tactility of its rotating controller. We could play with that thing all day…