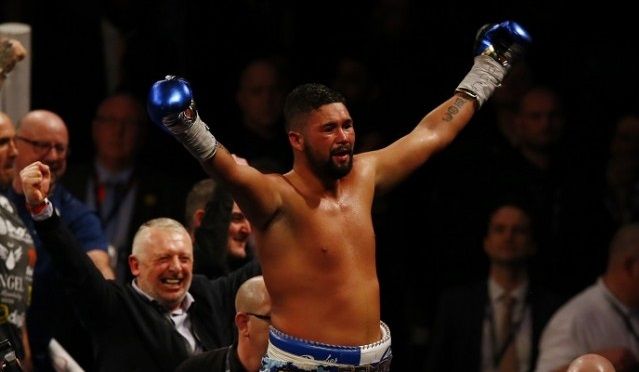 Make the most of it, because this is likely to be the last time we see Tony Bellew in a boxing ring. The 35-year old has mixed with the best of them and wants to prove his greatness with one last fight against Oleksandr Usyk. it's almost here and you can live stream the whole fight regardless of where you are in the world tonight.

Bellew's battles against the likes of David Haye and Nathan Cleverly - not to mention Adonis Creed! - have made the Liverpudlian a boxing hero in the UK. Over a range of weight classes. He's back to cruiserweight for tonight's bout where Bellew brings in a handsome 30–2–1 career record.

If this is indeed The Bomber's last ever professional boxing match, then he'll have to pull off something pretty heroic to go out on a high. The  undefeated Ukrainian Oleksandr Usyk is the current undisputed cruiserweight champion, holding all of the  the WBA, WBC, IBF and WBO titles. With half an eye on the likes of Anthony Joshua in his future, Usyk will want to make an impact in England at the Manchester Arena.

The Bellew vs Usyk bout is scheduled for a 10pm GMT ringwalk on Saturday, November 10 (although that depends a little on the undercard) and you're in the right place to discover how to live stream it from absolutely anywhere. Thanks to a VPN, that's even if you're away in a country that isn't showing it.

Live stream Bellew vs Usyk from anywhere with a VPN

Watch boxing with a VPN
If the country where you live either isn't showing the fight or you want to catch the UK PPV coverage on Sky Box Office, then there's a simple way to get hold of a live stream. The trick is to download and install a VPN, which then allows you to change your IP address so you appear to be in a completely different location.

VPN services also give you an extra layer of security, by encrypting your online presence. We certainly don't condone it, but that's worth knowing if you decide to try and find a dodgy stream of the match on Reddit. We've tested hundreds of VPNs and can recommend ExpressVPN as the best option currently available:

ExpressVPN (comes with a 30 day money back guarantee) and is the #1 rated best VPN in the world right now. You can watch on many devices at once including Smart TVs, Fire TV Stick, PC, Mac, iPhone, Android phone, iPads, tablets etc. Check out ExpressVPN

Once it's been downloaded and installed, open the app and select a server location in the UK.

As well as letting you watch the fight and stay safe while doing so, VPNs are also really useful for viewing websites that are blocked in your office or college and can even help you to watch Netflix from another territory.

How to watch the Bellew fight in the UK

It's a familiar story for fight fans in the UK, as this will be a Sky Sports Box Office PPV. The price of this one is £19.95 – which is usual kind of price bracket for boxing on Box Office - and live coverage from Manchester starts at 6pm for the undercard. The main event is currently expected to start at around 10pm GMT.

Fear not if you're not a Sky subscriber as Box Office events are available to non-subscribers on a range of devices as well.

If you find yourself outside the UK this weekend but still want to grab that Sky stream, you'll find that access is blocked due to geo restrictions. The way to get around this is by downloading and installing a VPN as described above.