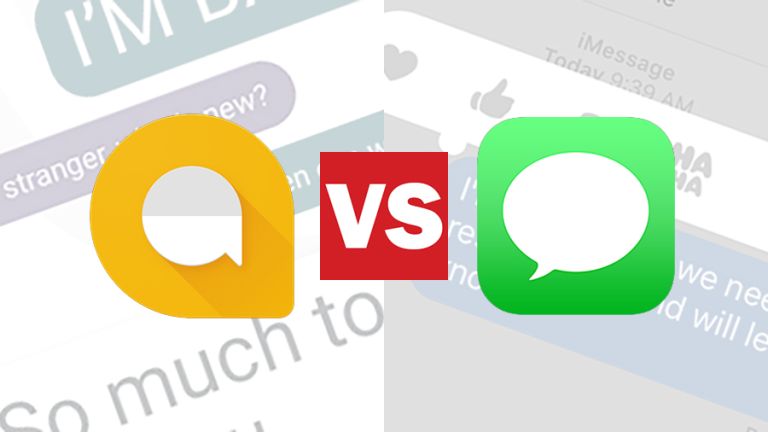 With Google Hangouts and a separate Messenger app for texts still in business, it can be tricky to see where Allo fits in Google's master plan, but both these tech giants now have a WhatsApp-style social messenger app to push - and here we put them head to head.

Allo vs iMessage: apps and compatibility

Both Allo and iMessage are very much closed shops - you can't really use them to talk to people who don't have the same app installed.

Unlike Allo, iMessage does have basic SMS support, so you can use it to fire off text messages to people without iMessage... however, you don't get a lot of the extra iMessage bells and whistles, and there's no iMessage app for Android or the web.

iMessage works on Apple Mac computers of course, and as yet Google hasn't introduced a web or desktop version of Allo. There are both iOS and Android versions of it available though, so it does work across the two big mobile platforms, unlike iMessage.

If you and everyone you know uses Apple kit most of the time then iMessage is a convenient option that works across mobiles and laptops and desktops. On the other hand, Allo works on pretty much any smartphone, if you can live without desktop access (and convince all your mates and relatives to install it).

Both solutions lack the comprehensive cross-platform reach of something like Hangouts, but perhaps this will change in time.

There's a lot of features that Allo and iMessage share: first and foremost, the ability to send private messages between you and another person, obviously.

Both apps support group chats, so you can rope in a bunch of friends or family members into one massive reply-all thread - very handy for planning a night on the town or a Christmas homecoming, or just shooting the breeze.

You can send media files, like photos and audio clips, easily enough in both apps, as well as add some 'crazy' text effects to change the size of messages and so on (iMessage has a bit more to offer in this area). There's emoji and sticker support in both apps too.

Both Allo and iMessage let you quickly share your location with contacts (if you're meeting up or just lost) and both let you mute particular conversations. All the basic stuff you want from a messaging app really.

There's not much to separate Allo and iMessage in terms of the basics - though iMessage does have handwriting support, and the option to disable read receipts.

The big draw for Google Allo, if you haven't already twigged, is the super-smart Google Assistant AI - like a friendlier, chattier Google Now. You can find the Assistant in its own conversation thread or launch it at any time in any other chat with an @google tag.

The Assistant can answer general questions that you would otherwise type into the Google search engine, play games with you, track sports scores and flights, suggest smart replies and more besides. You can expect to hear a lot more about it as it rolls out across all the hardware devices Google now makes.

What Allo doesn't have, at least not yet, is support for third-party apps and plug-ins. That was one of the biggest upgrades for iMessage in iOS 10 and means you can load in all kinds of extras, from sticker packs to mini games to weather forecasts.

In terms of security, iMessage also has the edge, with full end-to-end encryption. This is available in Allo, but not by default - you need to launch the special incognito mode to ensure no one else can possibly read your chats.

Both Allo and iMessage have their pros and cons - and both are still lagging behind the likes of WhatsApp and Facebook Messenger in terms of overall feature set.

iMessage has a head start, and if you use iPhones and Macs then it's probably your go-to messaging app of choice, particularly with the substantial iOS 10 update that's made it better than ever before. What lets it down is the lack of support for non-Apple devices and the web, though it does offer basic SMS compatibility.

Right now Allo feels like a testing ground for Google Assistant and not much else. The fact you can't send texts with it is disappointing, though on the plus side it does work across iOS and Android. A web version would be nice too, and encryption by default.

That leaves you stuck with iMessage for the Apple enthusiasts and Allo for the Google diehards (especially those interested in the Assistant), and it's no wonder most people end up using a third-party alternative instead.

If we had to pick a winner, iMessage is obviously the more advanced and feature-rich app, even with its Apple exclusivity. Google needs to work hard on Allo to get a significant number of people to switch over.

Aside from messaging apps, which is the best mobile OS - Android or iOS?