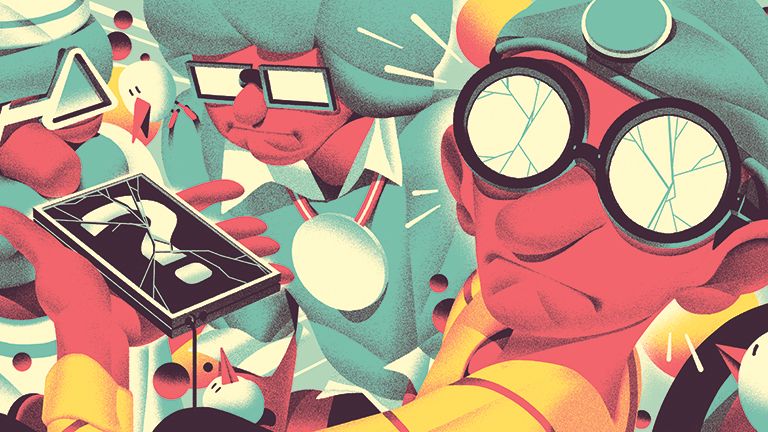 Gadget Guru, my smartphone's screen is broken. What should I do?

Cripes, an actual guru-type question for Gadget Guru, rather than some fella wanting to know about egg gadgets or how to deafen the neighbour’s dog or something. Whatever next? You’re really making Guru work for his money here.

Anyway, we’re all familiar with that sinking feeling. It begins as we will gravity to temporarily release its grip on our precious half-a-grand of electronics, reaches its midpoint as gravity flips us the bird, and ends with gravity’s soul-wrenching spider web spread across the looky bit. Modern digitisers are kind enough that you’ll generally be able to continue poking your screen, and your phone may work just fine, but glass splinters are friend to no man.

Time to get it sorted, then? Well, that all depends on your handset. Repairability is neither a marketable trait nor one that guarantees consistent handset sales, so it’s far from the first thing on manufacturers’ minds. But (usually) there’s a way to get it done.

If your fingers happen to be as sausagey as Guru’s, you may wish to take your phone to one of the countless fly-by-night mobile shops. Dodgy they may seem, and dodgy they may well be, but they do this stuff all day, they’ll have the parts on hand, and – Cumberland digits crossed – you’ll get a rejuvenated phone out of it.

If you’re willing to fix it yourself, first head to ifixit.com and check out their excellent guides. They evaluate thousands of devices on the basis of ease of repair; for those who don’t immediately turn to dust the second someone comes near them with a screwdriver, there are comprehensive walkthroughs to performing most repair tasks. Then it’s off to eBay to find the part you need, which could range from new glass to an entire screen assembly. If you’re considering an upgrade anyway, the price of the latter could make you wince your way to buying a whole new phone.

How can I keep track of my kids?

Oh, for Guru’s time, when GaGu Senior would shove him out of the front door at 8.30am on the dot, snap on a padlock, and expect Guru to roam feral around the housing estate until it was time for bed. An era, apparently, before noticeable predators existed. It’s not like that any more, is it? There’s a weirdo on every corner. Our kids need following absolutely everywhere, but they also need the freedom to perform youthful shenanigans, and it’s a delicate balance to reach.

The chances are your offspring has a phone, so it’s probably best to start there. That jumble of electronics isn’t just a way for kids to text poo emojis to their chums, or chase Pokémon around the garden; it’s the perfect way to keep tabs on their exact location (unless they’re playing upstairs, in which case Guru wouldn’t bother). There are stacks of apps that claim to do it, but many don’t work well at all. GaGu’s favourite, which does work to a certain extent, is Geozilla (£Free, Android/iPhone). It’s not 100 per cent accurate and, as with any GPS tracker, its success depends on the remote device feeding back to the server, so you’d better make sure your youngster has a decent data plan (and doesn’t abuse it).

For kids you don’t want to give a phone to, Guru would love to be able to recommend a host of watch-a-like options. He’d love to say the Filip ($149/£114 plus subscription charges) is a great deal, with its GPS tracking, options to call an adult-specified list of numbers, and ability to take incoming calls, Dick Tracy style. He’d love to tell you to run out and drop $199/£152 on a hereO, which has a 72-hour battery and GPS tracking, and sends a tamper alert if someone takes the watch off. Oh, and there are more besides.

But here’s the thing: they (probably) only work in the USA, and in practice they’re pretty damn pointless. Your sprogs will simply take them off. They’ll muck about. The batteries will last minutes, and you’ll have wasted your money. Guru’s advice: use your own eyes, or let ’em roam free.

What can I do about my rubbish Wi-Fi?

Two technical questions in one issue? Guru is set to swoon. Right, anyway… Doctor Guru’s expert diagnosis is that it’s those damn walls that are causing the problem. But you can’t exactly whip ’em out, unless you want to get intimate with your roof. Instead, position your router in the most central point in your house that you possibly can – out of any corners, and away from shelves or potential signal blockers.

If your ISP’s router is at fault – and it may well be – push for an upgrade, or switch it to modem mode and use one of your own. Asus’s frankly terrifying RT-AC5300, an eight-tentacled, £390 plinth that looks as if it should host the ritualistic slaughter of rodents, will cover you nicely for the future.

If your palace is as palatial as Guru’s, there’s one final option: range extenders. They’re a pain in the rear to get set up, and add another layer of stuff that could possibly go wrong, but they’ll work. GaGu would recommend the Eero mesh-network system, but it’s still not available in the UK for some unfathomable reason, and it’s not cheap.

How can I ensure that I work out?

If you use an app like RunKeeper, it’ll probably bombard you with push messages when you don’t log any exercise. But that’s not going to cut the mustard when you’re curled up on the settee scratching your balls.

The solution? Money. “Personal financial incentives,” says a scientific paper Guru can’t quite believe he’s reading, “can change habitual health-related behaviors and help reduce health inequalities.” In other words, if someone pays you to work out, you’ll do it. So put a bit of your own capital with a person you trust. If you tick the boxes, they pay out; if you don’t, they keep it. If the thought of paying your pals in order to sit on your own couch doesn’t make you move, nothing will.

What's the best laser pointer I can get?

Put that red rubbish out of your mind straightaway; that’s good for nothing but entertaining cats. If you’re looking for something absurdly bright, Wicked Lasers claims that its 1W green Krypton handheld ($499, or about £380) is the brightest laser legally available; it comes equipped with a barrage of warnings and a code-locked activation switch to prove it. Apparently, its beam can be seen from space; Guru has thus far been unable to test these claims.

For raw power, the same company offers the $199/£152 Arctic, a 5,000mW blue laser with which you could quite easily start a fire. You shouldn’t, of course. But you could.

Am I getting enough vitamins?

Multivitamins are fine as long as you know what you’re taking, don’t take mega-doses of anything that could do you more harm than good, and know that they can’t replace a balanced diet.

What can replace a balanced diet, however, is the Soylent, a plain-packaged concoction available in ‘drink’, ‘powder’ and ‘food bar’ forms that claims to be engineered to “provide all the protein, carbohydrates, lipids and micro-nutrients a body needs to thrive”.

Right, Gadget Guru is off for a double egg burger and fries. So long.