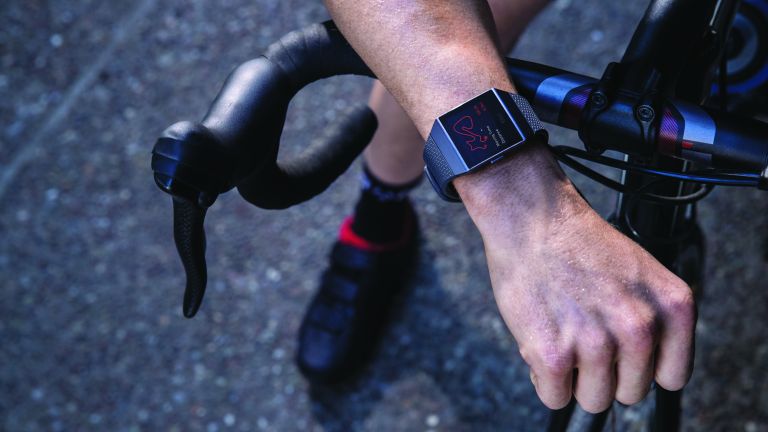 Fitbit Ionic was announced today, as everyone in England recovers from the Bank Holiday. A step on from Fitbit Surge in terms of its running, cycling and general fitness tracking, and from Fitbit Blaze in terms of smartwatch abilities and actual wearability, it seems like the pinnacle of Fitbitness to date.

Just £299 and made of aircraft aluminium in a choice of charcoal grey for boys and 'ochre' for girls and, er, other boys, the Ionic (nobody in the UK press office knows why it's called that, so don't ask me) is a smartwatch with four-day battery life.

It also does all the usual Fitbit step- and sleep-tracking stuff, and then ladles on some quite advanced fitness tracking. That includes automatic run tracking. When the movement sensors detect that you're running, it kicks in the GPS, cardio and run tracking app.

It's fully waterproof to a depth of 50 metres, so you can track your swimming , with the Ionic keeping track of your laps and exercise duration. The wrist-based cardio tracking can't work underwater, though.

With improved GPS and 2.5GB of onboard storage – enough space for '300 songs' – this is aimed at those runners and cyclists who are pathologically opposed to carrying their phone with them.

There's also an 'SpO2 sensor for estimating blood oxygen levels'. Withings tried this a few years ago, and I wouldn't say it exactly set the world alight, and it's not even turned on by default in the Ionic, but is there for third parties to use it for various, slightly vague, future, potential health-monitoring applications.

Smartwatch functionality is limited at launch to notifications, secure contactless payments and Strava but realistically, what more do you need? Here, you can really see the influence of Pebble, which Fitbit bought out last year, to the delight of Pebble owners everywhere, ho ho.

What Fitbit has finally done here is make a smartwatch/tracker hybrid with a claimed four-day battery, that looks, to be honest, pretty great in grey, and promises to do way more than just count your steps and tell you how long you've been asleep for.

It rolls out alongside Fitbit Coach, which is a a tarted up version of the previous Fitstar app, and offers personal training for £7.99 per month, and a developer kit for third parties wanting to make apps.

Fitbit Coach lets you get 'on-device workouts that adapt based on feedback you provide on your wrist', so you can say whether it was too hard, too easy or 'parfait' – this is standard Fitstar stuff, for people who used that. Come 2018, you will also be able to access audio, 'expert-designed running and walking sessions'. Interstingly, as well as being tailored around stamina and speed, these also promise coaching for your running and walking 'form'  – how your body is held while you run, how hard and at what rhythm your feet hit the ground, and so on. Details are sketchy at this point, but this is new for Fitbit.

From what I've seen of it, this just might be the wearable to turn around Fitbit's fortunes. The screen is really good, really bright and sharp, especially when you consider that four-day battery life. The Pebble-derived smartwatch OS should also be suitably good at doing the smartwatch essentials, just as Pebbles themselves were.

To my considerable irritation, you STILL can't set it to be always on during exercise. Yes, this does help prolong battery life, but Fitbit's 'raise your wrist to activate the screen' system just doesn't work reliably enough during high-intensity exercise, although it is absolutely fine in day-to-day use.

That aside, it looks better than any other running watch or band (admittedly not saying a hell of a lot, but you can only beat what's put up against you), provides all the smartwatch functionality that most people want, with scope for expansion if third parties get on board and seems to be able to cater for gym goers and cyclists as well as runners.