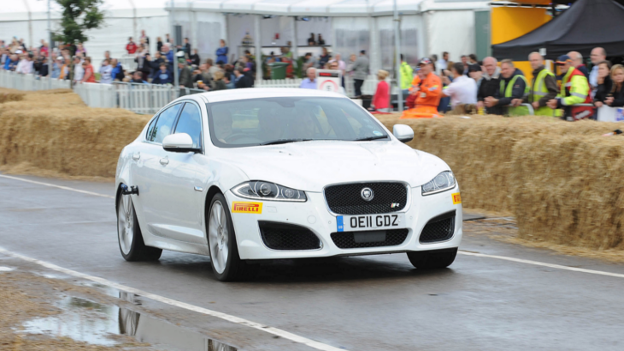 The first ever CarFest, Chris Evans' foray into the world of motoring festivals, ended today, with spectacular displays from the likes of Jaguar

About 15,000 motorheads were present at Laverstoke Park Farm, Overton, on an estate owned by former Formula 1 champ Jody Scheckter.

The family-friendly festival, which kicked off on Saturday and ended today, is the brainchild of renowned broadcaster Chris Evans and aims to celebrate the world of motoring – much like the annual Goodwood Festival of Speed.

As expected, there were plenty of cars on show as well as a live car chase - involving a Ford Focus and Jaguar XFR - that's a replica of the one that takes place in the upcoming movie The Sweeny, starring Ray Winstone and singer/rapper/actor Ben Drew (otherwise known as Plan B).

Dragged in a Jag

T3 was lucky enough to sit inside the same Ford Focus RS Cosworth 500 used in the film, and we also played a key role in the live car chase; as a passenger in the Jaguar XFR that goes head-to-head with the Focus.

We were driven around in top speed by professional stunt drivers from the Paul Swift Precision Driving experience centre – pictured above.

Despite a good fight from Ford's flagship motor, all eyes were on the Jag, which boasts a top-of-the-line infotainment system, sleek chassis and solid engine.

Attendees also witnessed an array of other displays, including a hilarious showcase of the world's fastest furniture (we're not kidding), as well as a car auction and a synchronised drive around by construction equipment specialists JCB.

The world's greatest car manufacturers were also out in full force, with the likes of Kia, Peugeot, Land Rover and Jaguar showing off their motors.

It remains to be seen whether CarFest will return next year, however, we're told the organisers plan on making it an annual event.

The Sweeny is out in cinemas in September.