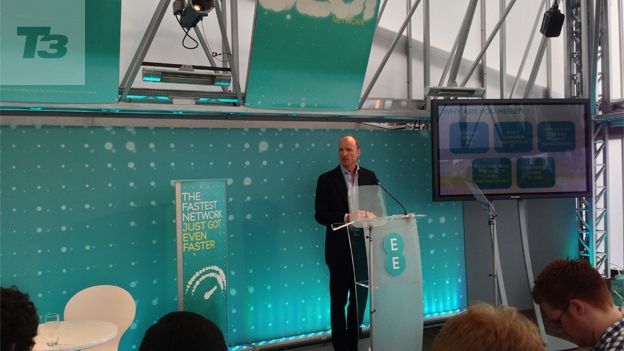 EE have just announced the launch of their new 150mbps 4G network upgrade along with a new 4G sharing plan which lets you have multiple devices all sharing the same contract.

Arriving at 12 major cities EE's new upgrade will offer what the company is claiming to be the fastest mobile network in the world with top speeds of over 150mbps however EE is stating that a more realistic speed will be an average of 20-30mbps.

Double speed 4G will be free to existing 4GEE customers and will be part of a new promotion this summer which will offer increased data allowances for a limited time in an attempt to convince more customers to switch over.

The network also announced a new 4G sharing data plan which would let you share a single data allowance between devices like the iPhone 5 and the Nexus 7 tablet all appearing on a single bill.

With one customer being the 'Lead Sharer' they can then dish out unlimited minutes and texts to five other users for a fee of £5 extra per month, they then all have access to a shared data allowance.

Extra smarpthones will cost you £12 per month whilst tablets will cost £5, of course if you want a handset as well this will bump the price up to £22 and £11 respectively.

Along with these new plans EE have just announced the UK's first WiFi AC router the Bright Box 2. The £175 router will be free to those who want to sign up to EE's Fibre network and will boast what the company claims is the fastest WiFi speeds in the home.

The service will go live on July 17th and to attract customers to the service users will be given £10 free credit to spend once they sign up and then top up. There will be over 230,000 shops and outlets which will allow wireless payments via NFC.

EE recently hit the headlines after it reportedly demanded that Vodafone remove a 4G ad from the Mercedes McLaren F1 car at the British Grand Prix claiming that it was false advertising considering the network doesn't actually have 4G capability yet.

That said it's unlikely the network will be too worried after CEO Olaf Swantee confirmed that EE were adding 100 new 4G customers every hour since launch.