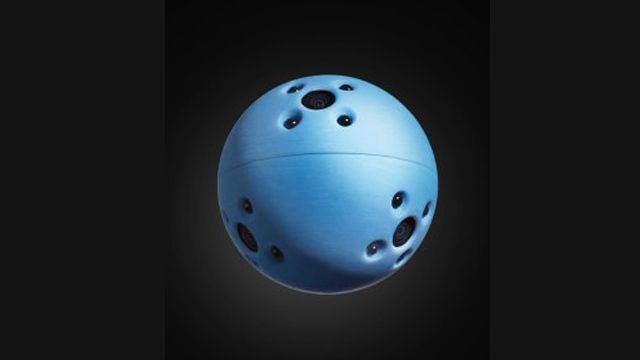 This would eat a Go Pro for breakfast. It's a bouncing tactical camera called Explorer. It's built to give law enforcement officials a peek into dangerous environments.

The ball contains a six-lensed camera. Lug it into a dangerous environment – a hostage situation, say – and it'll snap a load of photos and stitch them together into a single image. This is then sent to one of the officials' smartphones so they can see the lie of the land.

It also contains temperature and carbon monoxide sensors, so they can tell if an environment is dangerous without risking their health.

Unlike similar gadgets, it uses one camera with multiple lenses, rather than numerous cameras dotted around the device. This allows it to pull in photos from all the lenses at the same time.

As you'd expect, it has a thick, durable rubber exterior so it can survive all kinds of knocks and scrapes. And it doubles as a Wi-Fi hotspot, though more so you can snaffle images from it than check the BBC Weather report. War zones aren't known for their stellar mobile and Wi-Fi coverage, after all.

It's made by a firm called Bounce Imaging, which was founded by MIT alumnus Francisco Aguilar. He had the idea after learning that search and rescue teams struggled to find survivors in the debris of the 2010 Haiti earthquake.

Explorer has just had a commercial release. Prices start at $1,495 (£953). Certainly not cheap. But what price can you put on peace of mind?

Liked this? Check out our guide to the best action cameras.