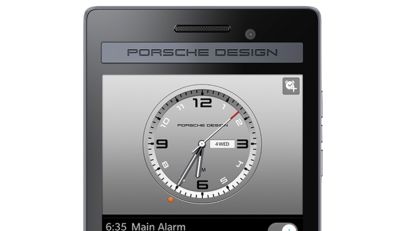 BlackBerry has announced an updated version of its Porsche Design P'9983 luxury smartphone, which was first released to select markets last year. If you splashed out a wad of cash for the P'9983 in 2014, then you might not be too pleased that it has been superseded already, but if you can afford to pay almost $2,000 on a smartphone, you might not care.

BlackBerry's latest premium tier device is dubbed the Porsche Design P'9983 Graphite and sports "exclusive graphite-metallic colored elements", while the back is made of "the finest, hand-wrapped leather", replacing the glossy black material of the previous version.

Don't go chucking your old Porsche Design P'9983 away in fear of being mistaken for a common pauper, however, as apart from the tweaks to the look of the handset, the hardware is still the same.

This means the Porsche Design P'9983 Graphite rocks a 3.1-inch Super AMOLED display with 720 x 720 pixels, a Snapdragon S4 processor, 2GB of RAM and 64GB storage space. Of course, being a BlackBerry, it also has a full QWERTY keyboard.

The Porsche Design P'9983 Graphite will go on sale in the next few weeks through Porsche Design stores, as well as select retailers and carriers, all for the wallet-clenching price of $1,950 (around £1,300).

Got a huge amount of money that's burning a hole in your pocket? Why pay sensible prices for technology when you can buy luxury versions as a status symbol for crazy prices?

Apple isn't known for making budget devices, but it appears to have excelled with the gold Apple Watch Edition that starts at £8,000 and goes all the way up to £13,500 for some models.

Apart from the 18-Karat gold case and exclusive bands, the Apple Watch Edition's hardware is exactly the same as the £299 model.

Vertu for Bently is another collaboration between a car maker and smartphone producer, and has been made from titanium with diamond knurling and an "engine-tuned pattern" along the the edge. It costs £10,700 and is covered in calf leather, so you can prove you're not only rich but also hate cute baby animals at the same time.