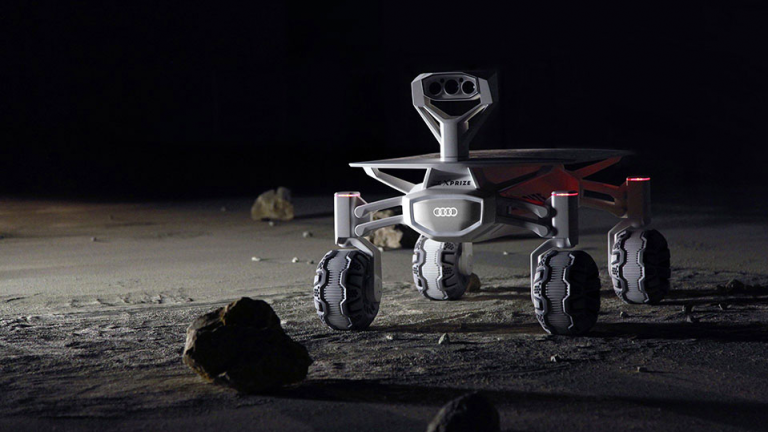 Audi is going from making cars to lunar rovers. The manufacturer is helping a team of engineers develop a low-cost lunar rover that's able to travel on the Moon as part of Google's Lunar Xprize. There's 16 teams from around the world and $30 million at stake - the race is on.

A team of German engineers called Part-Time Scientists have struck a deal with car maker Audi to design a Lunar Rover that could eventually drive on the Moon.

The space mission is being organised as part of Google's Lunar Xprize, which challenges entrants to develop low-cost ways of reaching the moon. Lucky for Part-Time Scientists, they have Audi on their side. The carmaker will offer the group its four-wheel drive technology, as well as expertise in lightweight construction, electric mobility and piloted driving.

Making the entire mission even more nerve-racking is the fact there's money on the line. Google will hand $30 million to the first team that transports a rover to the moon, drives 500 metres and transmits HD video footage back to Earth.

"The concept of a privately financed mission to the moon is fascinating,"said Luca de Meo, Audi Board Member for Sales and Marketing. "And innovative ideas need supporters that promote them. We want to send a signal with our involvement with the Part-Time Scientists and also motivate other partners to contribute their know-how."

"With Audi we have acquired a strong partner that will bring us a big step forward with its technological and mobility capabilities," added Robert Böhme, head of the Part-Time Scientists. "We look forward to future interaction and a fruitful partnership."

Part-Time Scientists and 15 other teams from around the world are competing in the space race, including Germany, Brazil, Italy, Hungary, Japan, Israel, Malaysia, Canada, Chile, and the United States. Audi hopes to get its own Lunar Rover up and running by 2017.

Audi isn't the only car maker working on other projects. Lexus appears to have made a Back to the Future-esque Hoverboard, and there's even video evidence (well, sort of) to prove it.