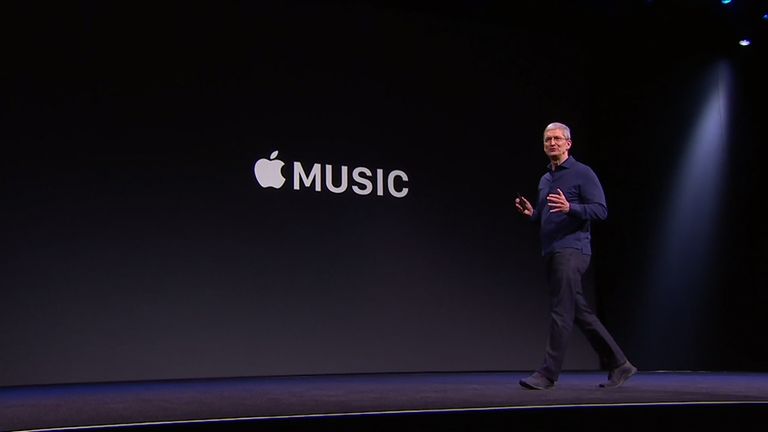 Apple Music matches other streaming services with a $9.99 price in the US - £9.99 in the UK. There's also a $14.99 family version for up to six family members. Again, £14.99. You can try it free for three months. Even if you're not an Apple Music member, you can still stream Beats 1 (more on that shortly).

Apple Music enables you to stream everything from iTunes (that includes The Beatles). There will be stacks of curated playlists as well as full recommendations for albums and playlists. Unsigned artists will also be able to share their music using the service, while there's also a Connect area where artists can post their latest tracks and behind-the-scenes photos. It's essentially a tool for artist-fan interaction.

Apple's first attempt at a social network was the forgettable Ping, which lived inside iTunes. Connect seems somewhat similar, only it lives inside Music. Connect sounds good, with the promise of a new way for artists to connect to fans - if they didn't already do this stuff on Facebook and Twitter.

Apple Music combines what you already have (your purchases/downloads inside iTunes — from the iTunes Store, imported from other sources, or ripped from CDs) and streaming from the entire rest of the catalogue

Apple SVP Eddy Cue tweeted to say that the capacity of iTunes Match is getting upgraded to 100,000 tracks (from 25,000) in time for iOS 9 - the subscription service, which has been around since 2011, lets you match local tracks with the iTunes database, and will enable you to plug any gaps you find in Apple Music's streaming library

Led by Zane Lowe, Ebro Darden and Julie Adenuga, it will broadcast live in over 100 countries, 24/7, from New York, LA and London. Apple promises “exclusive interviews, guest hosts, and the best of what's going on in the world of music”. The general concept sounds pretty much like the 48 year-old BBC Radio 1 to us.

How to get it - iOS 8.4 Music app and iTunes for the desktop

iOS 8.4's Music app now has a MiniPlayer - a row above the tabs at the bottom. You can tell Apple Music what you'll like and you'll get handpicked recommendatons based on your tastes. Remember Genius? It's that, basically. It's also easy to reorder and choose the next song from a playlist.

Apple Music will also be available from iTunes on PC or Mac. Obviously you'll need an Apple ID to sign in to it.

An Android app is coming, but isn't ready as yet.

As if that wasn't enough pre-launch information, the aforementioned Ian Rogers took to Twitter to confirm that Sonos support is coming "as soon as possible", something Apple said would be along before the end of the year.

So there you have it on the year's biggest music service launch: get ready to watch for that update alert tomorrow morning/afternoon depending on your time zone, and sit tight for an iTunes Match upgrade and support for your Sonos speakers.

Liked this? Why not read Apple Watch update: what's new? plus: What we think about Apple Music