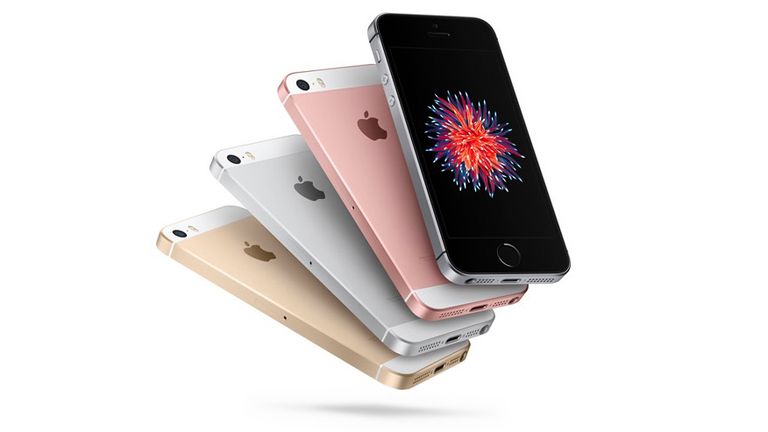 In other news: Apple's messianic mission to make the world a better place - fighting chronic disease and reducing ecological damage - while directly refusing to co-operate with State authorities, because it feels like it knows best, continues apace.

Our main takeaways from the launch event (apart from, 'it was quite a boring launch'.)

iPad Pro 9.7 is the new tablet range topper, pushing the Air 2 aside - perhaps it's felt that the Air was already as good as it needed to be, and was no longer lucrative enough.

The iPhone SE announcement (and a lot of the reaction to it) suggests that plenty of people do still want smaller phones.

It appears iPhone SE doesn't have 3D Touch, which figures, as that feature is largely pointless. So is Live Photos, though, and that's in the SE.

If for some bizarre reason, you want to relive what happned, scroll down about 40ft, then read upwards, like you're Chinese.

There's a new venue for next year's keynote, so this is the last one ever in Apple's current shed.

The problem with tech now is that an event like this just isn't going to knock anyone out. It's just a series of solid products that are variants on other, existing products. But what's this being pulled on the stage? Could it be… A CAR?

Just look how creative these people are.

It's in the usual colours plus rose gold. And there are cases, obviously.

"The best iPad upgrade ever and the ideal PC replacement."

The iPad Pro 9.7-inch is maybe more of a general consumer device, despite its name. Apple's trying to position it as a replacement for your crappy old Windows PC. Got a Mac? Why, it'll make a great accompaniment to your superb Apple Mac!

It's got the same Pro screen, with 40% less reflectivity than an iPad Air 2, double the brightness and a super-wide colour gamut, with 25% greater saturation than Air 2.

The chip is an A9X offering "a tonne of grunt" - "more graphical power than an Xbox 360". Hmm. It's also good for multi-tasking, of course.

Siri is always on, again.

Double the audio output of an iPad Air 2.

Stop! iPad Time. Tim's back and it's IPAD TIME. Many people have told him that iPad Pro is their primary computing device.

The designers at Pixar, Rapha and more all love it.

Why make one that's smaller? BECAUSE THE FIRST ONE IS TOO F**KING BIG. Of course.

Night Shift: the display will use "warmer" tones to help you sleep, shifting colours as the sun goes down, when

Notes: look, when Notes is the second thing to be mentioned, you know this is not a sexy update. You can now password protect your notes.

News: has 50 milion users, now it's being made faster with lead stories suggested for you.

CarPlay: every major car brand is on board. There are now "near you" points of interest - "gas" stations, "restrooms", "diners" and "Wor-cester-shire sauce" probably.

The iPhone SE? It's basically a small iPhone 6S. Or a REALLY small iPhone 6S Plus. Apple's upgraded the 3G/4G reception and Wi-Fi (now AC), camera and feature set to match its bigger brothers - always-on Siri, the fabulously pointless Live Photo and Apple Pay. It's "the most powerful 4-inch phone ever".

So, the iPhone SE. It seems a lot of people still want smaller phones. Who knew? People BEGGED Apple to keep making 4-inch phones. And Apple is nothing if not munificent.

Basically they've turned the 5S rose gold and added an A9 processor to make it "literally double the speed" of the 5S, with graphics that are "3 times faster". Sure they are.

Siri humour: "What do you think of recyling, Siri?"

"I can't work with this audience".

Oh my god this guy's shirt! My eyes!

Tim is reminding us that Apple TV is still totally a thing. Siri search allows him to ask for "Movies starring Kevin Hart". Hmm.

You can now put your apps in folders and dictate text orally. Apple TV? It's just a big iPad!

Now we're onto the trivial stuff: Apple Watch. Tim says, surprisingly, that people LOVE it! I am surprised at that, was expecting him to say, "They're like meh, whatever. Eh."

HERE IS A NEW NYLON BAND WOVEN IN A VARIETY OF COLOURS!

So ResearchKit does seem a wee bit more impressive than "It helps you take 10,000 steps."

Scary Jeff says: "We thought our goal was to assist medical research, but the same tools can be used to help people with their health… letting users and their doctors track symptoms so they can see if medication is working or not."

So 'product' #1 today is CareKit, whose first app is for Parkinson's. As I say it's a leetle bit deeper than an app that makes you look sexier in photos. It's also potentially vastly more lucrative.

Tim Cook's back. "Bold initiative… Positive impact… Progress…" You get the gist. Jeff XXXXXX, who looks like a Breaking Bad extra and not someone you'd want to get in a fight with, is talking about Apple's Health and ResearchKit initiatives. Apple is also busy curing diabetes and helping treat chronic conditions such as Parkinson's, epilepsy by sieving data from Apple Watch.

Apple Renew is an easy and safe way to recycle your Apple devices. A robot named Liam will rip them into their component parts. So this is all very nice, although as a consumer tech site, Apple's eco achievements are less interesting than say, them bringing out a new wearable.

Next up for Apple is Lisa. Sorry, I missed her surname. Classic liveblogging. 50/50 gender mix so far, well done Apple. Jackson! It's Lisa jackson.

They aim to be 100% renewable and carbon neutral in their offices worldwide. Me too, actually. They're using solar power where that's feasible, ie: not Regent Street in London, or the Churchill Centre, Brighton.

99% of Apple packaging is recycled or from sustainable sources.

Timberland Cook is up. There are now 1 billion Apple devices in the world today, he crows.

He's working a shirt and jumper combo, looking like a school pottery teacher. He believes strongly that our data should be protected. What he's saying, in his polite, Jimmy Stewart way, is "Shove it, FBI! No back door for you!"

Light, ambient entertainment from Beats 1 to play us in."I'm invincible/Don't need batteries to play." Could this be a clue that a solar-powered iPhone will launch today? No. This song does indeed appear to be literally unstoppable. Will it never end?

For Team T3 we got myself, Duncan Bell on the words and verses, man like Spencer Hart on screen grabs with spec and pricing info/Tim Cook in a shiny shirt and dad jeans. On human beatbox: Robert Jones. Please turn your electronic devices to silent mode, yeah?

Mic check, one two one two. Is this on?

We got the iPhone SE and the Macbook 2

Some fly watch straps for your wearable, boo.

iPad tablets for people of all nations

Dope Apple products get their next iterations. Word.

Welcome to glorious Cupertino where the weather is pleasant and well-dressed young men throng to see the latest delights from Apple, a tech company. Ther air is quite literally odourous with anticipation.

Come, join us to be educated, informed and maybe a tiny bit entertained for the next seven or so hours. Take off your coat; it's gonna be a long night.

Below are our predictions for the Apple Event, look how close we were(ish):

According to various sources, three main products will be headlining the show could include a new version of the Apple Watch (unlikely), a brand new iteration of the iPad (the iPad Air 3??) and the iPhone SE(think iPhone 7 mini).

All three products have been doing the rounds in the rumour mill, and in terms of its previous release schedules, all three seem likely to drop this year.

First off, there's the new, updated take on the classic iPad design. This one's also certain.

Apple hit a new high with the subtle, yet important, changes that made the Air 2 so popular - quite frankly - it's the only tablet you need to consider.

T3 is expecting a similar approach this year. However, if online chatter is to be believed, Tim Cook and co won't be discussing iPad Air 3, but an iPad Pro with a smaller form-factor... intriguing.

There's been talk of a 9.7-inch take on the iPad Pro, tentatively rumoured to be called the iPad Pro Mini - but more likely the iPad Air 3 - to have near identical attributes and specifications as its 12.9-inch bigger sibling.

A display capable of supporting the Apple Pencil Stylus and a respectable A9X processor are also heavily speculated for the device. Bringing the power and versatility of the Pro models to a smaller, more inexpensive band does see a logical step.

Then we have the Apple Watch 2 announcement. We're hearing this one could be a big part of the show (the 'Let Us Loop You In' title being a bit of a giveaway), but rumours heavily suggest we won't be seeing the Apple Watch 2 quite yet - because that would likely annoy Apple Watch OG owners.

More likely is a new set of newly designed Bands and possibly a new designer collaboration. We're hearing talks of new materials being incorporated, too, such as platinum and titanium.

Then, there's the biggy - the much-rumoured iPhone SE (no, we won't get the iPhone 7 this early).

Rumours are running riot that Apple is planning to reveal its first four-inch iPhone model since the mooted iPhone 5C.

As for its updated qualities, sources suggest the poor plastic casing has been dropped for a higher quality aluminium version, while its internal components will mirror the iPhone 6 with M8 and A8 processors, Bluetooth 4.2, Apple Pay, 8MP and 1.2MP cameras with autofocus and much more besides.

And will we get new Macs as well? The MacBook is not far off a year old, after all...