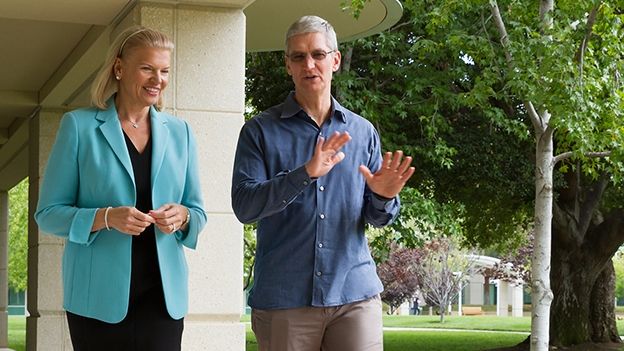 If you work in retail, healthcare, banking, travel, telecoms or insurance, your next work computer could be an Apple iPad.

That's because Apple and IBM have announced what both companies have described as a “landmark partnership”. According to Apple and IBM, the partnership is designed to “redefine the way work will get done, address key industry mobility challenges and spark true mobile-led business change.”

In other words, both companies have teamed up to take on their respective rivals in the business market.

IBM has said that it will be focusing on its expertise in big data and analytics, while Apple will offer the “elegant user experience of (the) iPhone and iPad”.

Apple has traditionally shied away from the business market. It dominates sectors in creative and marketing industries, but outside of those, it hasn't really broken much ground – at least with its OS X products. iPhones and iPads however are a completely different story.

The move could reignite the battle between age old nemesis Microsoft. The Redmond-based company is increasingly focusing on its business services, such as cloud computing.

iOS in the house Starting this autumn, IBM will start selling iOS devices into clients. Those iOS devices will come preloaded with software designed for enterprise level businesses in partnership with Apple.

Both companies are promising “a new category of mobile apps” that promise to address issues for businesses in industries like “retail, healthcare, banking, travel, telecommunications, and insurance”.

Speaking to Recode, Apple chief executive Tim Cook said: “We're good at building a simple experience and in building devices,” he said. “The kind of deep industry expertise you would need to really transform the enterprise isn't in our DNA. But it is in IBM's.”

Ginni Rometty, IBM's CEO, agrees. “We are delighted to be teaming with Apple, whose innovations have transformed our lives in ways we take for granted, but can't imagine living without,” she said in a statement.

“Our alliance will bring the same kind of transformation to the way people work, industries operate and companies perform.”