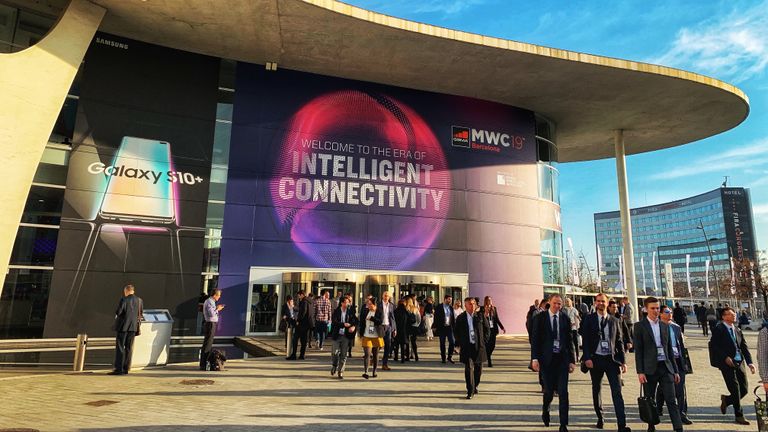 At the IFA show in Berlin last September we were starting to hear more about 5G phones as Huawei launched its 5G-ready Kirin 980 mobile chip. And then this January at CES in Las Vegas the roar of approaching 5G got louder as Qualcomm, Samsung and others talked up their 5G offerings.

Last week at MWC 2019 in Barcelona, it really felt as though 5G had finally arrived, despite the fact that there aren't yet any 5G networks to connect to. But while we wait for the networks to be put in place, the handsets are ready to go on sale.

While 5G was undoubtedly the main theme at MWC this year, folding phones also took their share of the limelight. Huawei showed off its Mate X, Samsung flaunted its new Galaxy Fold on its stand and LG had its own take on folding phones in the form of the LG V50 ThinQ 5G.

After spending four days at the show, in press conferences, briefings, and on the exhibition stands, the T3 team chose its winners for the best of MWC 2019 from everything that was announced or launched at the show. And here are the winners ...

The Xiaomi 5G Mi MIX 3 takes the existing Mi MIX 3's form factor, with its full-screen design and slide-up selfie camera, and adds 5G connectivity. The 5G version of the phone packs a slightly bigger battery than the non-5G one – 3,800 mAh vs 3,200mAh – to power through power intensive tasks that 5G handset owners are want to do.

But what really impressed us about the 5G Mi MIX 3 is the price. Xiaomi says the Mi MIX 3 5G will be available this May, with a starting price of just €599 (about £520). That's a steal at almost half the price of every other flagship 5G-enabled smartphone we've seen so far.

The HTC 5G Hub is a smart little device that caught our eye as it sat on the HTC stand. As its name suggests, it's a 5G hub, which replaces your wireless router, and grabs the 5G signal from the air and then shares it over a Wi-Fi network to ensure all of your devices are running on the fastest possible internet connection. There's also an ethernet connection in the back if you'd rather connect it to a wired network, which is likely to appeal to security-minded businesses who are wary of Wi-Fi.

The HTC 5G hub can connect up to 20 devices. A really neat touch is that it has a built-in ("all day") battery, so you could take it camping and power all your devices in the great outdoors. That battery is 7,660mAh and the Hub can even be used as a powerbank to charge your phone via the Hub's USB-C connection, too.

But that's not all. HTC has included a built-in touchscreen and stereo speakers so you can use the 5G hub as a mini media streamer –  it's running Android 9.0 Pie – should you wish and stream shows from services such as Netflix, or you can use the USB-C connector on the Hub to plug it into an HDMI port on your TV.

While 5G networks and foldable phones were the talk of the show, Huawei was the only company to combine the two. The Mate X really impressed us with its stunning 8-inch foldable screen with 8:7.1 aspect ratio and 2,480 x 2,200 pixel resolution.

Unlike the Galaxy Fold, Huawei has decided to keep the fold on the outside of the device, so the touchscreen curves around the hinge. Unlike its Samsung-branded counterpart, the Mate X doesn't need a second display to make the phone useable when the primary screen is stowed away. Genius!

As you'd expect from a flagship smartphone built by Huawei, the Mate X has a stunning display with vibrant colours, sharp text, and deep blacks. It looks brilliant whether it's completely unfurled, or wrapped around the hinge.

Speaking of which, the so-called Falcon Wing hinge is, without doubt, one of the most neat pieces of small-scale mechanical engineering we saw on the MWC showroom floor. It makes bending and contorting the Mate X a very reassuring experience. One of our biggest fears with this first generation of folding phones was that the necessary hinge and fold would end up betraying the rest of the hardware package, so it was really nice to see that Huawei had made this a non-issue right off the bat.

When it launches later this year, the Huawei Mate X will be ready to connect to any available 5G networks floating around. That's because it's packing a quad antenna-connected Balong 5000 5G modem – the crucial component in delivering on Huawei's lofty claim to the title of "world's fastest 5G phone". The Balong 5000 allows the Huawei Mate X to boast downlink speeds of 4.6 gigabits per second, which is approximately ten times faster than 4G.

When it comes to innovation, there's no doubt Huawei triumphed at MWC 2019. And the Galaxy Fold, announced just a week earlier, is already starting to look a little long in the tooth.

When it comes to enjoying blockbusters on the road, Samsung and Huawei seem to think folding a bigger display into your pocket is the right approach. Sony debuted a very different vision during its MWC keynote.

The Xperia 1 is one of three new handsets from the company to adopt a 21:9 display aspect ratio. If you're unfamiliar with the format, it's the standard ultra-widescreen you'll find in every multiplex. As such, the Sony Xperia 1 will not include black bars at the top and bottom of the image when you're watching the latest blockbusters.

Instead, the film or cinematic television show just fills the entire display – something neither Samsung nor Huawei can match because of the squarish aspect ratios of the mammoth screens on their bendable flagships.

But it's not just the elongated aspect ratio that caught our eye while we wandered around the MWC floor: Sony has kitted out its all-new flagship with one of the best displays ever fitted to a smartphone.

The 6.5-inch 4K CinemaWide OLED supports High Dynamic Range (HDR) to ensure you're watching the content as its creators envisioned. Not only that, but the built-in mobile engine will actively remaster older content in real-time to bring greater contrast and colours to ensure it's taking full advantage of the display.

The Ultra HD display is powered by the same technology found under the bonnet of the award-winning Bravia television range by Sony. The display also supports ITU-R BT.2020, which includes more colours than the human eye is able to discern, as well as DCI-P3 with Illuminant D65.

While it might not be as flashy as the folding phones at MWC, nor capable of downloading movies at the same clip as its 5G-enabled counterparts, the Sony Xperia 1 looks like a must-have for anyone who watches movies or binges on boxsets during their morning commute.

In terms of raw ambition, it was almost impossible not to reward the five-camera flagship smartphone from Nokia. The five 12-megapixel cameras and the dual-tone LED flash are arranged in a circular design, which for our money looks a lot like a spider's eye. Nokia says the cameras have been arranged in that particular pattern in part because it leaves enough space for the 3,320mAh battery cell, and because it looks aesthetically pleasing – something that some arachnophobes might query.

All five cameras will fire each time you press the shutter, Nokia says. While most smartphones typically only use RGB camera sensors in their rear-mounted set-ups, HMD Global says it chose to add more monochrome sensors because of the sheer amount of detail these can capture. According to the company, the monochrome sensors are able to capture 2.5 times more light than the RGB counterparts.

According to HMD Global, the Nokia 9 PureView is able to focus on subjects anywhere from 7cm to 40 metres away from its rear-mounted cameras. While most rival smartphones have around 10 layers in the depth-map generated by their multi-camera systems, Nokia 9 PureView has a jaw-dropping 1,200 layers.

That's a lot. Since the changes are non-destructive, it means you can overhaul the entire photograph at a later date. Google Photos has been updated to support the 1,200 depth-layers and can be used in conjunction with Colour Pop, so everything in the foreground is colourful, fading into greyscale.

It's wholly impressive stuff. While every smartphone manufacturer now offers some kind of twist on Portrait Mode, it's great to see Nokia try something really different.

We gave our final MWC 2019 award to Ericsson for its research and vision of 5G. One misconception is that the jump from 4G to 5G will be like the transition from 3G to 4G, but this isn't the case, Ericsson has demonstrated, because 5G enables so much more than merely faster movie downloads.

On the Ericsson stand, we saw a demo of immersive sports experiences for fans and learned how 5G tech can give viewers more control over what they see, and how 5G makes it cheaper for broadcasters to cover events (they don’t have to lay cables, for example). This is likely to lead to a rise in hyper-local sports coverage and the sort of play-by-play camera angles that sports fans can only dream of right now.

And then we saw how 5G could be used by the emergency services. Ericsson is currently working with Kings College on life-saving technology that will allow a hospital-based doctor to direct ambulance technician via 5G using a joystick, haptic glove and ultrasound scanner (a device available in all ambulances right now).

The technician would be able to relay vital data about the patient back to the hospital during the ambulance's journey so the doctor is fully prepared for the patient's arrival and their specific needs. At the moment, some emergency services use Skype to try to assess patients in transit. However, this is insecure and unreliable, so this new 5G-powered tech could really save lives.

Interestingly, the remote medical assessment does not leverage the superfast speeds available with 5G networks, unlike the live sports coverage. Instead, it's the dramatically lower latency in the connection compared to 4G that makes these types of real-time patient examinations possible.

There was a lot more to see on the Ericsson stand. Attendees were able to remotely control a truck on a test site outside Gothenburg, Sweden, from Barcelona, via 5G, while bands could use 5G for getting together and jamming remotely.