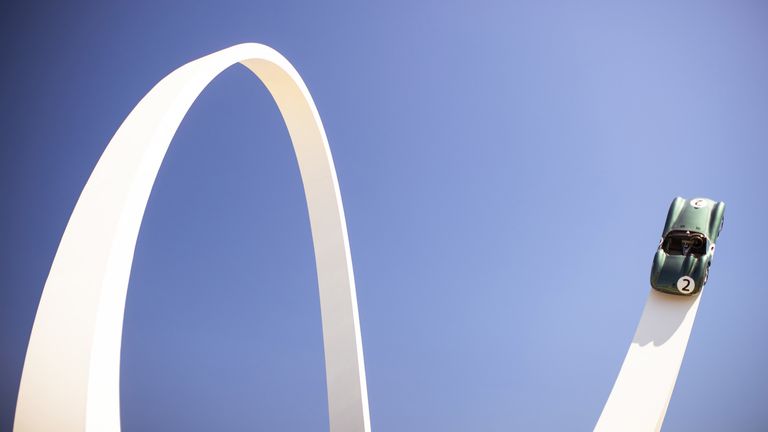 Staged every summer since 1993, the Goodwood Festival of Speed is the world’s largest automotive garden party. It's set against the spectacular backdrop of Goodwood House in West Sussex, and features over 600 cars and motorcycles, as well as legendary figures from motorsport.

This year, Goodwood celebrated its partnership with Aston Martin, featuring a spectacular central statue and a mouthwatering array of machinery spanning the entire history of the British brand.

Here are five highlights from this year's show:

This year’s Festival of Speed was officially opened by the Duke of Richmond driving a prototype of the new Land Rover Defender up the iconic Hill.

The test vehicle, which is in the final stages of its global engineering development program, tackled the course each day, wearing a camouflage pattern to hide its shape.

The Duke of Richmond said, “Few vehicles in the world can claim to be an icon, but that’s the only way to describe the Land Rover Defender. It’s extremely close to my heart and a vehicle that I’ve had a close connection with over the decades, so to be able to open this year’s Festival of Speed by driving it up the Hill was a real privilege.”

Every year drivers and manufacturers compete to be the fastest up the Hill.

The record stood for 20 years, until the all-electric Volkswagen ID.R smashed it this year, setting a time of 41.18 seconds and averaging 101.4mph along the course.

The ID.R then broke its own record when it went out a second time, setting a time of 39.90.

It adds the Goodwood Hill Climb to its impressive list of records, setting the electric vehicle lap record around the famous Nürburgring Nordschleife, with a time of 06:05.33 minutes in June, and its Pikes Peak International Hill Climb in Colorado, USA, (07.57.15 minutes) set in June 2018.

The world’s first fully electric racing SUV was launched at this year's Festival of Speed. The all-electric Odyssey 21 is set to compete in a new electric racing series, Extreme E, which will take place around some of the world’s most remote areas to highlight the impact of climate change, and promote the adoption of electric vehicles.

Built by Spark Racing Technology, the Odyssey 21 completed a demonstration run on the iconic Goodwood Hill Climb, giving spectators and race fans a first glimpse of the future of electric off-road racing.

Race locations for the series will range from the Arctic ice sheets to tropical rainforests – all areas affected by climate change.

Testing of the Odyssey 21 prototype will get underway in September, with delivery of 12 cars from Spark Racing Technology to follow in March 2020.

The car, a Lincoln MKZ, will be controlled by Drift Champion Vaughn Gittin Jr. from a different location on the estate. It was powered by a Designated Driver teleoperation system, the new Samsung Galaxy S10 5G, and a Samsung VR headset; all enabled via Vodafone’s superfast 5G network.

“This proof of concept is a great stepping stone towards remote presence use-case using 5G and the Goodwood FOS was the perfect testing ground.

Legendary supercar brand, De Tomaso, has been revived with the global debut of its brand new P72 model on the opening day of the 2019 Goodwood Festival of Speed.

The car has been developed over the last five years thanks to a remarkable partnership between De Tomaso, AMG founder Hans Werner Aufrecht and designer Peter Brock, who not only drew up such classics as the Corvette Stingray and Shelby Daytona Cobra Coupe but also worked on the original De Tomaso P70.

De Tomaso has not yet revealed what will power the P72, but it has revealed that it has been built to FIA LMP2 race regulations, and that only 72 will be built, each costing around €750,000.