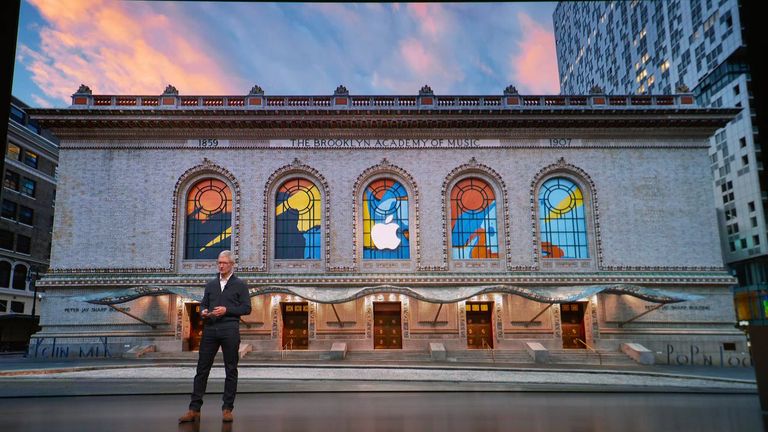 One month after Apple unleashed its new iPhone XS, iPhone XS Max and iPhone XR, Tim Cook and friends are holding another gadget extravaganza – and we're expecting the rest of Apple's product lines to get some love this time around.

The event, teased with the tagline "More In The Making" on the official invitations, was held at the Brooklyn Academy of Music in New York City on October 30, 2018.

Apple CEO Tim Cook kickstarted the keynote by talking about the Macintosh, revealing there are now 100 million macOS devices in use worldwide, and more than half of all Mac customers are new to the operating system.

Cook also highlighted the importance of the MacBook Air, praising the "groundbreaking design" that not only influenced the "rest of the Mac line" but "the entire industry". The Apple executive called it the "most beloved notebook ever" before unveiling an entirely redesigned MacBook Air with a Retina Display.

Apple has taken the wraps off a redesigned MacBook Air, complete with a 13.3-inch Retina Display with more than four million pixels, third-generation backlit butterfly mechanism keyboard, and ForceTouch trackpad with haptic feedback.

The redesigned MacBook Air also includes a Touch ID fingerprint scanner which can be used to quickly login, or authenticate Apple Pay transactions in your browser.

Apple will offer a swathe of different configurations, including solid-state HDDs with up to 1.5TB of built-in, non-expandable storage. These perform up to 60% faster than the previous generation MacBook Air. Powering the new notebook is the eighth generation Intel dual-core CPU with integrated graphics, with up to 16GB of RAM.

There are also stereo speakers for 25% louder audio, as well as deeper bass compared to previous versions of the notebook. Despite all of these new additions, the all-new MacBook Air is 10% thinner than its predecessor, measuring 15.6mm.

The next-generation MacBook Air is made with 100% recycled aluminium – a first for the company. That makes it the "greenest" notebook Apple has ever produced.

The new MacBook Air starts from £1,199 ($1,199), which makes it the most affordable Apple notebook with a Retina Display. It's available to pre-order today, with the first units shipping to customers from November 7, 2018.

Next up, Apple turned its attention to the Mac Mini – its diminutive desktop that hasn't seen a significant refresh since October 16, 2014. The latest updates make it "more capable", Apple claimed on-stage.

On the outside, little appears to have changed, aside from the new Space Grey finish. But inside, Apple has included Intel's eighth-generation chipset, which offer 60% faster graphics than the previous models.

The maxed-out new Mac Mini includes 64GB of RAM, and a 2TB SSD. All of the new Mac Mini machines will have four Thunderbolt 3 ports, a HDMI connector, USB-A and a headphone port. And for faster networking performance, Mac mini offers a 10Gb Ethernet option for the first time.

As before, the beauty of the Mac Mini is the way it can be used with any screen, keyboard and mouse (you can even pick it up and take it from room to room, or from the house to the office, if you want).

Apple listed a number of popular uses for the Mac Mini, highlighting its popularity in education, as well as server farms for mammoth technology firms.

The new iPad Pro range is thinner than before, with rounded corners and no physical Home Button. The Liquid Retina display now sports rounded corners, since the screen closely follows the contours of the physical device. The latest iPhone models – that is to say iPhone X, XS, XS Max and iPhone XR – have a similarly curved display.

Despite the thinner bezels, the borders around the display are still be wide enough to accommodate the Face ID facial recognition system without a notch. Face ID has also been updated to unlock when held in portrait and landscape modes, something that is not possible with the latest generation of iPhone.

The 10.5-inch iPad Pro has been replaced with a new 11-inch model that has the same physical footprint as its predecessor. Meanwhile, Apple has kept the same 12.9-inch display of the largest tablet in the iPad Pro line-up, however, it has 25% less volume than the previous generation.

The latest round of iPads are powered by Apple’s new A12X Bionic chip which boasts an eight-core CPU and 7-core GPU. According to Apple, this results in 35% faster single-core performance and a leap to 90% faster for multi-core tasks. As for the GPU, Apple said the iPad Pro “delivers Xbox One S class graphics performance in a package that is much smaller.”

With the new iPad Pro models, Apple has ditched its proprietary Lightning connector in favour of a single USB-C port. The switch further cements the iPad Pro as a viable laptop replacement, since it allows the tablet to power an external display.

The new port also allows iPad owners to charge out – plugging in an iPhone to charge from the USB-C port, for example.

Elsewhere, the Smart Keyboard has been redesigned. Dubbed Smart Keyboard Folio, the new case means iPad Pro customers no longer need to buy a separate case to protect the back of the tablet. There is also support for multiple viewing angles, which the company says is perfect for working on your lap, or at a desk.

The new iPad Pro models are the first to ship without a 3.5mm headphone port, so tablet owners will have to opt for one of the company's USB-C to 3.5mm dongles.

“We sold more iPads in the last year than the entire notebook lineup of all of the biggest notebook vendors,” CEO Tim Cook revealed. Apple has sold a total of more than 400 million iPads.