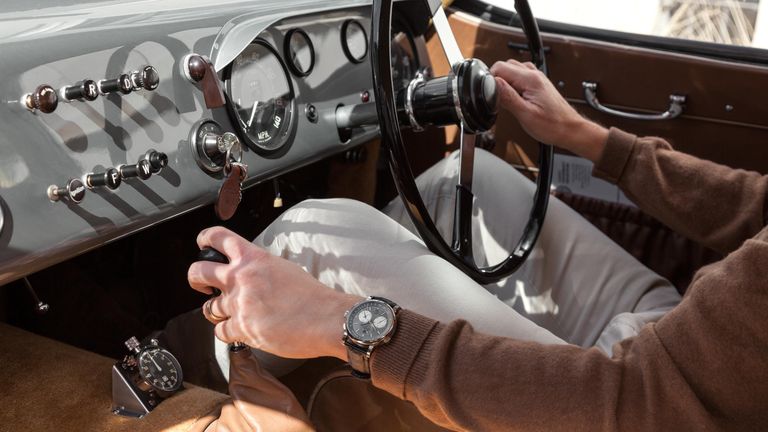 Are you finding it difficult to justify spending a significant amount of money on a new watch? Whether you've been saving up for years, or you're an impulsive fellow with a big bonus, spending thousands on a timepiece is a serious decision.

We're here to remove all that guilt, and let you know spending serious amounts of cash on a watch is totally worth it.

Maybe you're having trouble persuading a significant other to let you get that grail watch? It's always tricky. Most people will say you are mad, then immediately list all the things you could buy instead; a laptop, a dream holiday, a car, maybe even a house deposit...

But you shouldn’t let their reaction put you off buying that dream timepiece.

If you really must explain yourself (or perhaps you need pushing over the line to make the big purchase), here are some compelling reasons to slap down your credit card without even wincing.

1. You have lusted over it

There’s no harm in buying an expensive watch (assuming you can actually afford it, of course) purely because you want it. You may have spotted it in the jeweller’s window on your lunch break stroll and lusted after it ever since; one day dared yourself to go and try it out, conveniently leaving the credit card at the office.

You see the watch advertised in every magazine, in a T3 article, and all over your algorithm-fed Instagram feed. So you finally cave and buy it. Now enjoy it – life’s too short for buyer’s remorse when money is spent on something you have lusted after for weeks, months, or even years.

2. You admire the craftsmanship

Generally speaking, expensive mechanical watches have a lot going on inside. There’s the mainspring, balance wheel, escapement and gear train, to name a few components, all working in perfect unison to keep time. Yes, the processor of a smartwatch or the quartz movement of a cheaper model will probably keep more accurate time, but where’s the fun in that?

An expensive Swiss watch, complete with an intricate handmade mechanism displayed through either a glass case back or skeletal face, is a thing of beauty and to be admired at every opportunity. Seeing the complexity at work – especially if the watch contains several complications, like a moon phase dial – helps you understand where all that money went, and appreciate the craftsmanship that put it all together.

3. It reminds you of your own achievements

If you’ve had a particularly good year at work, you could do a lot worse than treat yourself to a nice watch. That way, every time you glance at it you’ll be reminded of the effort you put in to afford it. The watch becomes not just a way of telling the time, but a constant reminder of what you are capable of when you put your mind to it, and what you have achieved.

People spend millions of pounds on pieces of art, which serve no purpose than to be beautiful – so what’s wrong with spending big money on a watch, which is both beautiful and useful?

Yes, any cheap Casio can tell the time, but a pricey Swiss number draws your eye in with its diver’s bezel, exposed crown, shimmering dial, intricate complications, and supple leather strap. From the indices and chronograph, to the moonphase complication, sweeping hands and exposed movement, watches offer up lots of tiny details to observe and admire.

Looking at a fine Swiss watch is about far more than merely checking the time.

5. It commemorates a special occasion

Whether it’s your wedding, the birth of a child, or another important day, a special watch can help mark the occasion - you could even have the date and a message engraved on the back of the case.

That way whenever you glance down at the time, you’ll be reminded of that special day - and what’s more, the watch will become a treasured family heirloom to pass from one generation to the next. Once it has passed from parent to child and eventually grandchild, the high initially cost will surely become a distant and inconsequential memory.

It’s no wonder Patek Philippe talks about not owning its ultra-expensive watches, but merely look after them for the next generation.

6. It can be an investment

This can be a sensitive subject, given the negative connotations of ‘flipping’ a watch – selling rare and sought-after models for a profit right after they go on sale. But it’s worth factoring in the residual value of certain expensive watches, especially if you need a little convincing.

Generally speaking, watches by Rolex and Patek Philippe hold their value well, and some may even appreciate during your ownership. Some models of Rolex Daytona are currently appreciating, and the brand’s iconic ‘Pepsi GMT-Master’ – so called because of its red and blue bezel – is always in demand.

Much of this appreciation comes from limited supply, where you can’t simply walk into a jewellers and buy the watch you want. If a limited number have been produced there will be a waiting list, and that list will be topped by loyal customers.

While a decent working knowledge of company’s annual release schedules (and a good relationship with your authorised dealer "AD") will help with buying new, long-term investments are far more difficult to predict.

Rolexes like those worn by Sean Connery in early James Bond films, for example, can fetch a tidy sum at auction, and rare configurations – the depth rating in red, say – can up the value in ways those who bought the watch new wouldn’t necessarily have been aware of.

The watch market is incredibly diverse, with styles as varied as any other sector of the fashion industry. As such, the watch you choose to wear is a projection of who you are. It isn’t just a device to tell the time – your phone can do that, and is probably more accurate – but it says a lot about your personality.

The size, style, make, complexity, colour and material of your watch all give away clues about the real you, and perhaps even where you see yourself on the social ladder.

March into a business meeting sporting an all-gold Rolex, and your clients will instantly know you’re worth a bob or two. Strap on a TAG Heuer Monaco and there’s a good chance you’re into motorsport, or are a fan of Steve McQueen – either way, it’s a conversation starter and says something interesting about you.

Want some advice on what watch to purchase? Check out T3's buying advice below: