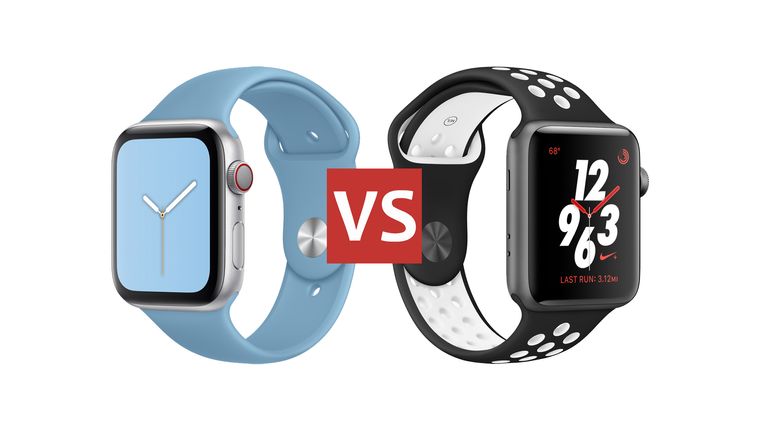 While both have their benefits, we took a look at both the Series 3 and Series 4 watch to help you better understand which one suits your needs.

Whether you’re looking to buy your first smartwatch or have been thinking about an upgrade, make sure you consider the key differences before committing to buying. From features and price, right down to the nitty gritty of design and size, we’ve got you covered.

The original Apple Watch design remained unchanged for a long time, but that changed with the Apple Watch Series 4. Let's take a look at how these smartwatches differ.

The Series 3 has an OLED retina display with Force Touch and pumps out 1,000 nits brightness.

It comes in two finishes: Aluminium and Space Grey, along with two different case sizes: 42mm or 38mm. Both are 11.4mm thick.

The 42mm case gives you a 740mm² display screen while the smaller case allows for a 563mm² screen.

You can also get the Apple Watch Nike Series 3 in both colours and sizes.

The Apple Watch Series 4, on the other hand, offers a wider range of finishes, adding Gold to their collection.

It's slimmed down the case to 10.7mm thick while increasing the case sizes to 44mm and 40mm; that’s makes way for much larger screen sizes of 977mm² and 759mm².

The Series 4 also comes in the Hermes edition with a Stainless Steel finish.

The Series 4 features LTPO display, with 1,000 nits brightness, but this could mean a save in battery life of between 5-15%.

Ultimately, the screen is much more usable and pleasing to look at (aesthetically), with more space for texting, tapping, and whatever else you want to do with the your smartwatch.

All Apple Watch straps are interchangeable between both the Series 3 and Series 4.

Both have a wireless chip and built-in lithium-ion rechargeable battery with up to 18 hours of battery life.

Both the Series 3 and the Series 4 have GPS and Cellular models, and both come with Wi-Fi.

All in all, the Series 4 is a huge jump from the Series 3, but, crucially, you won't be disappointed by the performance of the Apple Watch Series 3.

The Apple Watch Series 4 is pretty similar to the Series 3 in most respects, but where the two really differ is when it comes to health and fitness features.

Both watches have GPS, a barometric altimeter, and are water resistant up to 50m.

However, for those who plan to use their Apple Watch for health and fitness, the Series 4 is that it has an Electrical Heart Rate Sensor (ECG app) located on the Digital Crown (which has also been upgraded with haptic feedback).

The Series 3 has an Optical Heart Sensor which has been upgraded to second generation on the Series 4, and the gyroscope and accelerometer have been improved, too (accelerometer now measures up to 32 G-forces).

The Series 4 also has added fall detection. So those who are active and want to use their watch to track progress and aid activities may find the Series 4 to be more beneficial in terms of features.

The Apple Watch Series 3 is the cheapest option if you're looking to get your hands on one of Apple's smartwatches. Prices for the GPS-only model start from around £279.

The Apple Watch Series 4 GPS-only model is over £100 more expensive, with starting at £399.

The GPS and cellular models are yet another step up, with the Series 3 starting from £379 and the Series 4 from £499.

You can find the cheapest Apple Watch Series 3 and Series 4 prices below:

If you’re new to Apple and smartwatches in general, the Series 3 is certainly not outdated yet. It has a range of features that are just right for a beginner smartwatch, and you’ll save yourself over £100 by going for this model.

However, if you’re someone who likes the latest tech, then opting for the Series 3 will mean missing out on some key new features and design.

While many of the features do remain the same, there are some pretty good upgrades on the Series 4 including the super-improved processor, design and health and fitness features. Ultimately it's faster, smarter and shinier.

Those considering upgrading from a Series 1 or Series 2 will find it worth their money to opt for a Series 4, as some significant changes have been made. However, if you’ve got the Series 3 already and were wondering if it’s worth upgrading so soon, we’d recommend waiting for the next release to really get your money’s worth.