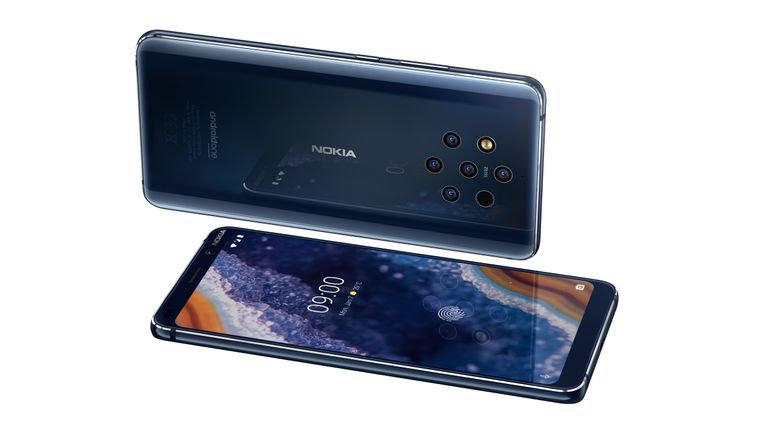 HMD Global, the Finnish company that owns and sells smartphones under the Nokia brand, has taken the wraps off its latest range of handsets at the Mobile World Congress trade show in Barcelona.

The star of the show is the all-new Nokia 9 PureView. From the front, the new smartphone looks almost indistinguishable from the recent slew of Android-powered rivals. It has a 6-inch OLED display protected by Gorilla Glass 5 to avoid scratches and scuffs, a 20MP front-facing selfie camera, and runs Android 9.0 Pie. There's also an in-display fingerprint scanner, like the Samsung Galaxy S10, Huawei Mate 20 Pro and OnePlus 6T.

However, flip over the Nokia 9 PureView and it's immediately clear this is a very different proposal. Nokia has fitted its new flagship with a five-camera array, which is arranged in a circular pattern on the back of the handset.

Honestly, the design of the new camera looks a lot like a spider's eye. Nokia says the cameras have been arranged in that particular pattern in part because it leaves enough space for the 3,320mAh battery cell, and because it looks aesthetically pleasing – something that some arachnophobes might query.

All five cameras will fire each time you press the shutter, Nokia says. For those who struggle with maths, that results in a single 60-megapixel photograph. Nokia 9 PureView is also capable of panoramas, which can quickly tot up to more than 240-megapixels.

Obviously, it's not all about the number of megapixels, but those who want to blow-up their images onto canvases and posters should take a look at the Nokia 9 PureView.

While most smartphones typically only use RGB camera sensors in their rear-mounted set-ups, HMD Global says it chose to add more monochrome sensors because of the sheer amount of detail these can capture. According to the company, the monochrome sensors are able to capture 2.5 times more light than the RGB counterparts.

Each of the five lens on the back of the handset has a different exposure level to capture even more information each time you hit the shutter button.

So, what is Nokia doing with all of this information? One of the most interesting features is the ability to adjust the focus of a photograph after it has been taken. While the Galaxy S10 and iPhone XS allow owners to adjust the amount of bokeh-style blur behind the subject of the photograph, Nokia allows you to completely change what object is the focal subject of the image. Using the preinstalled Google Photos app, you can make the background out of focus to highlight the foreground or vice versa.

According to HMD Global, the Nokia 9 PureView is able to focus on subjects anywhere from 7cm to 40 metres away from its rear-mounted cameras. While most rival smartphones have around 10 layers in the depth-map generated by their multi-camera systems, Nokia 9 PureView has a jaw-dropping 1,200 layers.

That's a lot. Crucially, it means you don't have to decide exactly what the final image will look like when you're composing your shot. You can always overhaul the entire photograph at a later date. Of course, you can save multiple different options, since the changes are non-destructive, which can result in some stylish results.

The Nokia 9 PureView is powered by the Qualcomm SnapDragon 855, coupled with 6GB of RAM and a new imaging co-processor developed Light. This new chipset helps to take some of the strain off the SnapDragon 855 to avoid battery life suffering. As a result, HMD Global says its new Nokia 9 PureView should still last a day and half before it needs to be recharged.

The huge amount of processing grunt inside the new flagship Nokia coupled with the Light co-processor means the five-camera is still capable of shooting 60-megapixel images in a burst mode. Nokia concedes that it might take a while little before the full-resolution images are processed and ready to edit. However, a smaller 2MB thumbnail will be available instantaneously in Google Photos.

Nokia 9 PureView saves images in JPEG, as well as RAW. According to the company, RAW images typically take up between 30MB – 50MB of memory. There's 128GB of built-in storage, which should be enough to handle your next holiday snaps. There's a dual-purpose secondary SIM card / MicroSD card slot, so as long as you're not too bothered by having multiple lines on your new Nokia, you can add up to 512GB additional storage for your photos.

The 4K video capture is handled by a single lens, which is likely to disappoint those who hoped the borderline-excessive array of cameras would be used to produce some interesting, original new video effects.

When it comes to viewing those megapixel-packed photographs, Nokia has spared no expense. Its latest handset boasts a 5.99-inch Quad HD+ pOLED display. It has a 18:9 aspect ratio and a 2K resolution, which should be more than enough to view those stunning cameras.

Elsewhere, the Nokia 9 PureView is rated IP67 for dust and water resistance, which means it should be able to take high-resolution depth-map photos in the water. There's also Qi wireless charging – but no headphone port. So, if you want to listen to music you'll be forced to use Bluetooth or USB-C headphones.

The Nokia 9 PureView has a $699 global RRP. There's no word on UK pricing on SIM-free or contract handsets, but we'll update this article as soon as we hear. Release date will be announced in due course, Nokia says.