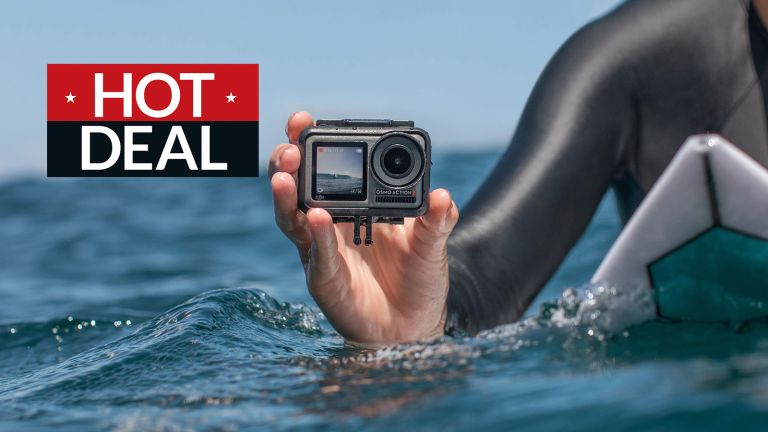 When we first caught wind that DJI was releasing its first ever action camera, the DJI Osmo Action, we were excited and massively curious to see how they’d approach it. After all, the GoPro Hero 7 Black set the bar so high, it was one of those ‘go big or go home’ moments for DJI.

There was a lot of expectation riding on DJI’s first action camera, and boy did the Osmo Action deliver. We even awarded it a 5-star review, praising its exceptional RockSteady gimbal-like stabilisation, voice control and, of course, that stunning colour front screen.

It’s waterproof down to 11m without additional waterproof housing, and is compatible with a wide range of third party mounts. Vloggers love its colour front screen, which enables you to see if you’re perfectly in frame, and the 2.25-inch rear touchscreen is also a joy to use.

The DJI Osmo Action instantly became a world-beater, right up there with GoPro, and right now it’s a juicy £40 off at a range of retailers, including Amazon and Currys, making it £90 cheaper than the GoPro Hero 7 Black. Considering it’s so close between the two in terms of spec, this is a great time to buy the Osmo Action.

DJI Osmo Action at Currys | Now £289 | Was £329
Order the DJI Osmo Action from Currys for the same price of £289 and you can collect it from your nearest store tomorrow, depending on stock availability. Other delivery options, including paid-for next-day delivery and free standard delivery, are also available.View Deal

When it comes to filming, the Osmo Action dishes out plenty of options: it shoots up to UHD 4K60 at 100Mbps and benefits from DJI’s RockSteady EIS tech. Similar to GoPro’s HyperSmooth tech, RockSteady brings gimbal-like smoothness to videos.

Want slow motion shots? It shoots up to 8x slow motion at 1080p240, and in the right context the results are nothing short of brilliant. Stills are ace too, with the fun centring around a raft of manual settings. This includes being able to max out the shutter speed at 1/8000s, to boost image clarity in super-bright sunshine, or drop to 120 seconds for long exposures.