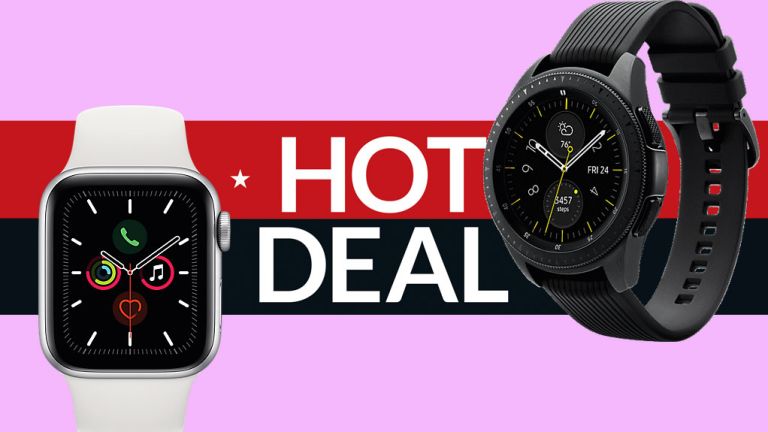 In this bargainous deal just in time for Valentine's Day, telecoms company Verizon is offering a bumper deal on smartwatches. The deal varies slightly between brands, but we'll opt for Apple first. Buy one Apple Watch, at full price, and get $150 off another smartwatch from the same company.

Apple Watch Series 3 Aluminium 38mm Case | was $299.99 | now $149.99 with buy one, get one half price at Verizon
Now two generations old, the Apple Watch Series 3 is still a cracking buy in its own right. The easy-to-use UI, top fitness tracking and health metrics combine with cellular connectivity to create a stunning package. And now, for less than the price of a Series 5, you can get TWO. View Deal

Apple Watch Series 5 Aluminium 40mm Case | Was $499.99 | now $349.99 with buy one, get one half price at Verizon
The Series 5 takes the already-impressive framework of the Series 3 and elevates it to new heights. With an always-on retina display, an ECG on your wrist for automatic heart-rate monitoring and App Store access, it's better than ever. Snap up this for yourself and a Series 3 for your spouse (or very good friend) for a total of $650. Bargain.View Deal

Apple products are so rarely discounted these days that this is the cheapest you'll find an Apple Watch almost anywhere. The same principle is applied to the Samsung Galaxy Watch: snap up one in Verizon's sale, and you can get up to $190 off another Galaxy Watch or Galaxy Watch Active2. That's incredible value you don't often see on these top-of-the-line wearables. See more info on the bargain below:

Samsung Galaxy Watch 46mm | was $399.99 | Now $209.99 with buy one, get one half price at Verizon
The larger Galaxy Watch model competes with the specs of the Apple Watches in fine style, with an in-built heart rate monitor, GPS, an altimeter, a barometer, and a 1.15GHz dual-core Exynos 9110 chipset. The deciding factor may well be whether you'll be pairing the watch with an Android or an iPhone.View Deal

Samsung Galaxy Watch Active 2 | was $429.99 | now $239.99 with buy one, get one half price at Verizon
This sort of discount on the slimmer, sleeker Galaxy Watch Active is unbelievable. Call, text and stream your favorite music while you're at the office or out for a jog, and get next-level fitness tracking and insight capabilities. View Deal

Excellent value, right? Verizon are offering sweeping price cuts on other products in their stores, such as $300 off the Google Pixel 4. Head over to the Verizon store for more.

Not satisfied? Peruse our lists of the best smartwatches and best fitness trackers money can buy, or check our tool below to find more great deals on the latest wearables.