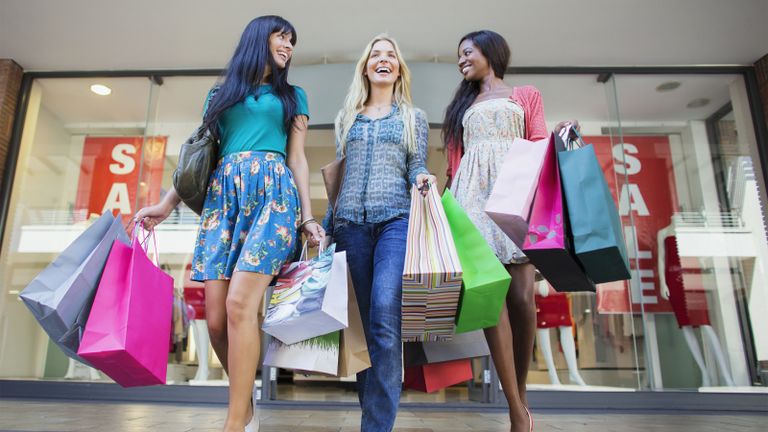 The Christmas and Boxing Day sales might be over but the deals train has not left town because those sales have simply turned into New Year and January sales and some of the discounts have got BIGGER. That means that you can save money on all the things you wanted to get for Christmas but didn't and that's great news given that for most of us finances can be a little tight in February.

UK retailers are currently slashing 70% and more off their stock making now a brilliant time to grab a deal. They're doing this because there's such heavy competition between stores and because shopper numbers in the weeks leading up to Christmas were apparently lower than they were at the same time last year. Apparently, "unsettled weather" was also a factor.

We've scoured the web to see what sales are on right now and we're able to say that there are LOADS. We've listed the best of the current January sales for the UK below.

Amazon.co.uk January Sale
The Amazon January Sale is offering deals on New Year's resolution favourites such as nicotine patches, vitamins, minerals and dietary supplements and there are also deals on beauty products, clothes and more. Basically, everything you need to hit that 'new year, new you' goal without breaking the bank.View Deal

John Lewis January Sale
The John Lewis January sale has hundreds of discounts across electricals, homewares, clothing and much more and the John Lewis Never Knowingly Undersold price promise means you will not find these prices cheaper elsewhere. There's up to 50% off womenswear, up to 40% off menswear, up to 50% off home and garden, up to 30% off furniture and lighting and much more.View Deal

Currys January Sale
The Currys January sale is offering up to 40% off over 1,000 products. Those products include Apple iPads and Apple Watches, laptops, headphones, fitness trackers, 4K TVS and a loads more. You can either get your order delivered or collect it from a store near you.View Deal

AO.com January Sale
Need a cheap kitchen appliance, 4K TV, games console or other electrical item? Then check out the January sale at AO.com. With offers across brands such as George Foreman, Nespresso and Samsung, you can spruce up the house with new gadgets. There are almost 1,000 offers in the clearance sale, but hurry because when they're gone they're gone.View Deal

Argos January Sale
The Argos sale is offering discounts on thousands of products. Top deals include the Reebok Jet 100 Treadmill for just £379.99 and the Toshiba 49 Inch Smart UHD TV for just £269 but there's loads more worth checking out. Order your items by 1pm, and they'll be delivered by 6pm with Fast Track same day home delivery.View Deal

Boots January Sale
The Boots January sale is offering up to half price on selected makeup selections, 25% off selected No7, 1/3 off selected fragrances, and savings on electrical items including shavers and electric toothbrushes. Keep an eye on this sale as we expect it to ramp up as the month goes on.
View Deal

Very January Sale
Very has some great January offers with up to 60% off selected women's, men's, kids' fashion and footwear. This sale is massive with over 12,000 items on offer so if you want to refresh your wardrobe ahead of spring, it's worth checking out.View Deal

Debenhams January Sale
Debenhams is offering up to 70% off in what it is calling its 'Blue Cross Sale'. So that's 70% off womenswear, menswear, and home furnishings. There's also up to half price beauty and fragrance, up to half price handbags and up to 50% off electricals including coffee machines, hair dryers and lots more.View Deal

Le Creuset Winter Sale
TheLe Creuset Winter Sale is offering up to 50% off items including cookware sets, dinner plates, stoneware dishes and cast iron casserole dishes. It's not the biggest selection but the savings are big, so if you want some premium cookware without the premium price then head over to this sale before it ends.View Deal

Go Outdoors January Sale
Fancy a lovely warm jacket for those winter walks this year? Then head over to the Go Outdoors sale where the retailer is offering discounts of up to 60%. There's also free next-day delivery when you spend £50 or more and Go Outdoors promises to beat any other retailer's price by 10%.View Deal

Wiggle January Sale
Whether you like to run, swim or cycle you'll want to head over to Wiggle right now where you can save up to 50% off running shoes, cycle clothing, triathlon clothing and more. Just the ticket to get yourself kitted to tackle those New Year's fitness resolutions.View Deal

Goldsmiths January Sale
The Goldsmiths January sale is offering a massive 50% off diamond engagement rings, luxury watches, necklaces, bracelets and lots more. Make sure you check this fantastic sale out before it ends.View Deal

AllSaints January Sale
AllSaints seems to have sales on more often than not but the current AllSaints sale is a particularly good one because it is offering discounts of up to 50% off in its 'Happy New Decade' sale. Hurry and make big savings on jackets, shirts, knitwear and more or you'll have to wait 15 minutes until the next AllSaints sale.View Deal

Diesel January Sale
You probably either love Diesel or hate it, or maybe you're indifferent, I don't know. Anyway, one thing we can all agree on is that its clothing is a little bit pricey. So if you've been lusting after a pair of Diesel jeans or shoes or a jacket, for example, you'll want to hit the Diesel sale now and save up to 50%.View Deal

Hollister January Sale
Califorinian clothing company Hollister is offering up to 50% off selected styles both online and in store, so it's a great place to check out if you want a stylish, warm puffer jacket or hoodie to see you through the colder weather.View Deal

Topman January Sale
The Topman January Sale is offering up to 70% off AND an extra 10% off if you use the online code TMXTRA10. That's a ridiculous saving and as you'd expect at those prices, lots of items are selling fast. Check it out now so you don't miss out.View Deal

Topshop January Sale
It would be ridiculous for Topman to have a sale and for Topshop to be charging full price for everything, so you'll also a find a January Sale at Topshop with the same massive savings – up to 70% off plus an online exclusive extra 10% off with the code TSXTRA10.View Deal

H&M January Sale
H&M is also offering some huge discounts in its January sale – up to 70% of women's, men's and kids' clothes, its Divided range and H&M Home items so you can update your home and wardrobe on the cheap while stocks last. View Deal

Schuh January Sale
The Schuh January Sale is knocking money off women's, men's and kids' footwear which includes footwear from brands including Adidas, Base London, Converse, Dr Martens and many more. Students can get a further 10% off.View Deal

Office January Sale
The Office January Sale sees discounts of up to 50% off " boots, boots, boots", which is handy given the weather at this time of year. That means you can save money off brands including Timberland, Office and Ugg and if you don't want Boots, you'll be pleased to know that you can also get up to 50% off trainers. There's free UK standard delivery on all sale orders over £60.View Deal

Lovehoney Janaury Sale
Lovehoney is offering up to 60% off sex toys and lingerie in its New Year sale, with a bumper range of discounts available until January 13. There are loads of new items in the sale while several of the products from the Christmas sale have now been discounted even further.View Deal