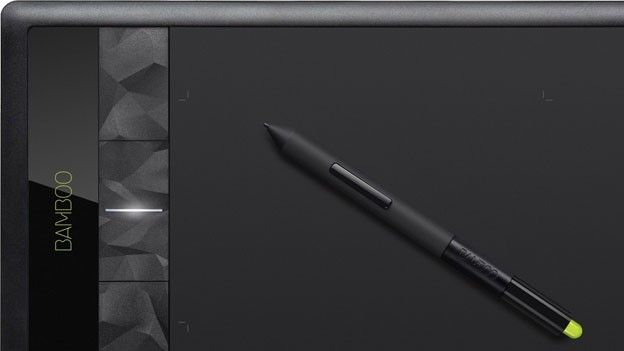 The Wacom Bamboo Pen & Touch graphics tablet isn't designed to be an iPad Killer but is pitched at graphics enthusiasts, whether pro or beginner

A tablet but not as you might have come to expect, the Wacom Bamboo Pen & Touch latest offering is not going to be pitting itself against the likes of the Apple iPad 2 or the Samsung Galaxy Tab 10.1 but reaffirming the company's position as a leading force on the less glamorous graphics tablet scene.

Taking design tips from its touchscreen touting, entertainment-packed, app-filled namesakes, Wacom's newly revised Bamboo range pairs performance with design traits not accustomed to such a market for a strong all-round product that continues to impress.

Adding a bit of flare to a sector usually clouded in fusty grey and bland monotones, the Wacom Bamboo Pen & Touch utilises a number of subtle design characteristics to create a big impact and a device which stands out from the crowd of competitors.

Angular buttons, green accents and a gloss black finish give the Bamboo a distinguished, artistic feel that plays off the device's purpose, becoming one of the first artistic-based tech products to feature an aesthetic as striking as its abilities and one which will appeal to its target audience.

Far from a simple pen and pad partnership, the Bamboo Pen & Touch comes hosting a bevy of highly desired input controls with the tablet's 16:10 aspect ratio well proportioned allowing for easy manipulation and creation through the 9.7-inch touch responsive surface. It may be bigger than the likes of the Samsung Galaxy Note, although it is slightly bigger than the screen on the Sony Tablet S.

Further bolstering the pen's standout qualities, the lack of necessary batteries keeps the weight down making it easy and pleasant to wheeled whilst two buttons allow for mouse style clicks.

With a simplistic setup process and a steep learning curve the Wacom Bamboo Pen & Touch is not limited solely to the hardcore user and graphics enthusiast.

Supremely responsive, the Bamboo Pen & Touch is a joy to use with the device's ability to handle a variety of multitouch based finger gestures, much like Apple's Magic TrackPad, a welcome addition and one which will frequently have you forgetting about the pen or your mouse and opting straight for manual control.

Whilst hooking up the tablet to your computer via the additionally available wireless connector proves fiddly and will leave you facing a number of jittery half starts and cut outs at first, once properly synced the lack of tethering cable means you are no longer restricted to a short cable instead being able to move the tablet at will to suit your needs and style.

Following a few days of continued use with the Bamboo tablet replacing our computer mouse it is easy to see how the Wacom device could do away with the age old controller on a permanent basis. Fast, responsive and beautifully simplistic the Pen & Touch is a joy to use and with a stunning finish, is top of its game.