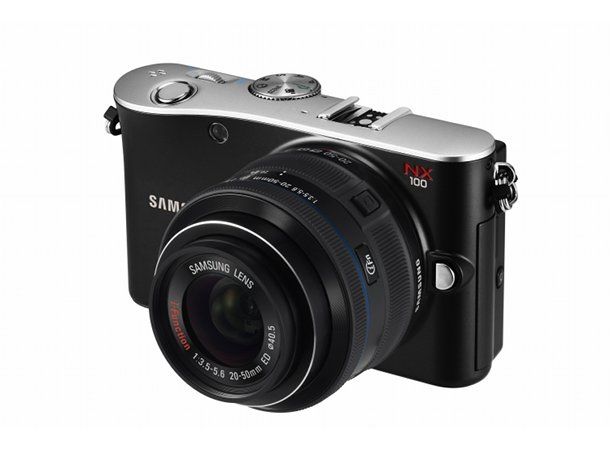 Compact system cameras, or 'hybrids', are on the up, accounting for ten per cent of all digital SLR (DSLR) sales and rising, a category in which they're presently lumped despite offering a more compact – and technically different – alternative. The pitch is better image quality than your average point and shoot from a smaller form factor than an actual DSLR.

Enter Samsung's 14.6 megapixel NX100, which comes off the back of its first attempt with the Samsung NX10 at the start of 2010 and looks to be further distancing itself from those larger cameras.

Resembling a cheaper, more plastic-y version of the (fixed lens) Leica X1, the Samsung NX100 shares similar if not quite as diminutive proportions with the Olympus Pen range, the Panasonic Lumix DMC-GF1 and the Sony NEX-5.

Not surprisingly then, like those cameras the Samsung NX100 has jettisoned the traditional SLR mirror mechanism to bring lens and sensor closer together – hence the more slender build. That said, even without the stubby 20-50mm kit lens attached (equivalent to 30.8-77mm in 35mm film terms), the Samsung NX100 is still too much of a squeeze for all but the deepest pockets of a poacher's jacket. This partially defeats its purpose.

The Samsung NX100 is further notable for shifting some control over in-camera functions to the lens itself – a system Samsung has christened iFunction, or 'iFn' for short.

For example, with a press of the 'iFn' button located on the lens barrel, and a rotation of the front lens ring, exposure can be adjusted (+/- 3EV). The lightening or dimming effects are visible in real time on the AMOLED screen (as opposed to LCD), which offers deeper blacks and impressively crystal clear quality. Though it's the industry standard 3-inches it has the effect of feeling bigger.

There's no separate optical or electronic viewfinder provided out of the box. Nor, interestingly, is there a built-in flash, merely a vacant shoe for a flashgun to also be added as an optional extra.

Otherwise the Samsung NX100's controls are large and obvious. As a starting point, there's a nicely chunky shooting mode dial set into the top plate.

Featured here alongside the scene and subject recognizing Smart Auto mode allowing for purely point and shoot operation, are the creative quartet of program, shutter priority, aperture priority and manual shooting modes, plus further scene and 720p video shooting modes. There's no one-touch video recording button, which would have made for added convenience.

The usual four-way control pad at the back is here more of a scroll wheel. It's a little fiddly for our tastes, as, like the iFunction ring, it's very sensitive. So we found ourselves scrolling past settings we wanted. Overall though we found the camera more easy to use than Sony's smaller NEX-5.

There's no proper handgrip on the Samsung NX100. But, curiously, with a smooth gentle curve to the right hand side of the body at the front and a subtle indentation for the thumb at the rear we didn't curse the omission.

Like other compact system cameras, the Samsung NX100 attempts to deliver DSLR-like image quality not just via its lens swapping ability but also via the larger DSLR-sized APS-C sensor at its heart.

Also DSLR-like are its response times. Powering up in around a second, we were able to be up and shooting as fast as our forefinger could find the shutter release button, auto exposure points highlighted instantly in green with a half press.

Menu icons are graphical and there are quite a lot of them on screen at any time, which can make for a daunting first impression.

On the up side, all the essentials are provided at a glance, and dedicated buttons for the likes of white balance and ISO light sensitivity settings – here stretching to ISO6400 – ensure adjustment is at your fingertip.

As you'd expect given the above, we managed to get some good pictures out of the camera with the minimum of effort. Even at maximum wide angle with the supplied lens, focus is consistently sharp across the frame and we were impressed by the rich colours the Samsung delivers, especially when opting for vivid mode to highlight the colours of autumn.

It's a shame about the lack of built-in flash, the fact that it's missing a viewfinder out of the box, and that the build is more plastic-y than its rivals, but then it is reasonably cheap for the level of spec delivered. However you might want to factor in the purchase of an optional viewfinder and a flashgun for added versatility.

The NX100 may be reasonably priced but doesn't as yet feel quite as convincing a compact system solution as rivals from Olympus, Panasonic and Sony.