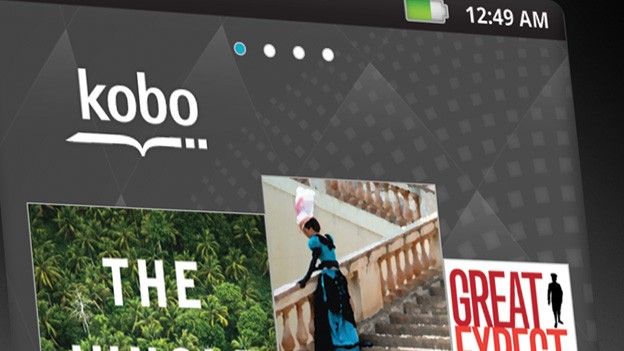 The Kobo Touch is the latest gadget to take on the Amazon Kindle Fire, but is it an ereader or a tablet? And can it crack the budget Android tablet market?

The Kobo Vox takes things a step further than its sibling, the Kobo Touch, throwing a colour screen into the mix. With more in common with the Amazon Kindle Fire than the Amazon Kindle 4 ereader, it shuns e-ink and adds more tablet-like features.

The seven-inch screen pays a resemblance to the BlackBerry Playbook and Amazon Kindle Fire. There's a soft, quilted back and it's light enough to be held in one hand. Unlike similar Android tablets there's no camera – front or back.

You do get the three standard Android tablet buttons at the bottom, though – home, back and menu.

The full-colour 1024x600 resolution touchscreen lacks vibrancy, with blacks fading to muddy grey at the edges. Book covers look great in full colour, but there's a reason Kindle and the like punt for e-ink screens; reading on the Vox's screen is tiring on the eyes.

Reading outside, you'll struggle to view the screen due to glare, and the effort of loading the colour screen means page turns are more sluggish. The Kobo Store doesn't offer any video content.

Most video file types are supported, but there's no USB slot for adding your own and only 8GB of built-in storage.

Kobo grants you access to 2.2 million ebooks. The numbers are impressive, with one million of those free. However, search for something off of the main bestseller list and things get expensive – certainly more expensive than closest rival the Kindle.

The Vox isn't just about ebooks though; thanks to pre-loaded apps PressReader and Zinio, you can also download 2,000 newspapers and 4,200 magazines in PDF format (including T3). The seven-inch screen isn't ideal for viewing magazines, though.

Talking of apps, the Kobo Vox runs Android 2.3 and allows you to download a ring-fenced selection of apps, although there's no access to the Android Market. The 800MHz processor limits you to the less demanding of these, though.

Kobo is keen to link reading and social networking. You can share passages from your favourite books, or flaunt your reading stats using Kobo Reading Life.

A hook-up with Facebook may go some way towards making this happen, but Kobo's Pulse social networking tool seems aimed at kids rather than their parents.

The Vox's battery lasts for seven hours with Wi-Fi turned off. You'll have to be near a plug socket when it does run out too, as infuriatingly the Vox refuses to charge via its microUSB slot.

The Kobo Vox has managed to combine the worst of both worlds. The lack of an e-ink screen makes it less-than-desirable as an ereader and the tablet features can't compare with any of the numerous Android tablets on the market making it an unlikely contender for our list of the best tablets to buy.

By trying to do everything the Kobo Vox appeals to no one; underpowered, with a poor screen, content that can't compete with the value of the Amazon Kindle Store, and a price tag that's cheap, but not cheap enough to make up for its many faults. If you're desperate for an ereader-tablet hybrid with a colour screen we suggest you wait for the Kindle Fire to hit the UK.