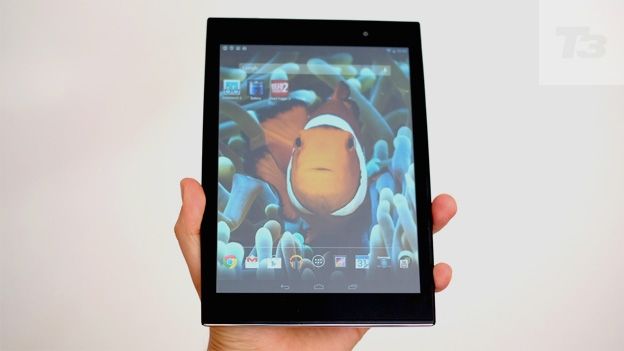 At £99 the Gigaset QV830 sounds like a great lower-cost alternative to the Nexus 7. Our Gigaset QV830 review finds out if it's the real deal

Gigaset – never heard of the company? It normally makes boring old home phones but has branched out into the trendier area of tablets with the Gigaset QV830.

What an entry it is too. For just £99 you get a metal body and a screen a bit like a first-gen iPad mini's, while the Android OS gives you access to thousands and thousands (and thousands) of apps and games. It's not perfect, but it certainly is cheap.

One of the first surprises of the Gigaset QV830 is that despite being dirt-cheap, it's made of aluminium rather than plastic. Several low-cost tablets try to use metal but often end up still looking cheap, but this one looks and feels pretty good.

The metal back is painted black rather than trying to show off how metallic it is, and it's nice and smooth too. As an 8-inch tablet those with smaller hands may not be able grasp the Gigaset QV830 in one hand side-to-side like they could with a Nexus 7, but it's perfect for easy two-handed use.

At just 8mm thick and 319g, the Gigaset QV830 is very slim and very light. Those figures are dead close to the 7.5mm thickness and 331g weight of the iPad mini – something that Gigaset has probably been very deliberate about.

Some of the Gigaset QV830's hardware snazziness is just for show, though. Look too closely and you can see it's clearly a budget tablet.

It's just the very back part of the tablet that's metal – the rounded edges are plastic – and if you manhandle the QV830 with a bit too much gusto, you can feel the plastic and metal plates moving against each other a bit awkwardly.

Build quality is not as good as an iPad, but the top screen layer is at least made of glass, giving you that smooth iPad-like feel.

As is common among cheaper tablets, all the Gigaset QV830's connections live on a single edge, the top one. They're cut into a silvery plastic strip.

There's the usual microUSB port, a headphone jack and – the one to notice – a microSD card slot. You get 8GB of memory built-in, which is enough for a few games, but you'd definitely need to invest in a memory card if you want to watch movies on the thing.

Up top here is also where you find the volume rocker and power button.

Just as 8GB storage is about as little as the Gigaset QV830 could afford to chip in, the tablet has pretty basic features, but enough to keep most budget buyers happy. There's Wi-Fi, GPS and Bluetooth, but plenty of bits you might expect in a more expensive tablet are missing.

The QV830 doesn't have NFC, mobile internet, or an IR transmitter. This is a pretty basic tablet, and as there's no video output you can't easily hook it up to your TV. It's a casual lounger's tablet, not a powerhouse.

One of the key selling points of the Gigaset QV830 is its screen. Where most budget tablets have 7-inch widescreen displays, this one has a screen much closer to the iPad mini's.

The screen is squatter than a Nexus 7's and eight inches in size. This is what makes the Gigaset QV830 a bit hard to grasp in one mitt, but 4:3 aspect screens like this general give an impression of being more expansive than widescreen ones.

It's a nice display area to play with, whether you're gaming or browsing the web. However, as most movies are widescreen anyway, you'll end up with big old black bars on the top and bottom when watching films unless you crop into the picture.

The Gigaset QV830's screen quality is OK – not terrible, but far from cutting edge. You get an 8-inch 1,024 x 768 IPS panel, similar to the first-generation iPad mini.

Pixel density is pretty low at 160ppi, giving text in particular that blocky, pixellated look. The Gigaset QV830 is much, much less sharp than the latest 1080p Nexus 7 tablet.

However, other than that image quality isn't too bad. Colour and contrast are reasonable (white balance is a bit warm, though), so while images never really pop thanks to the rubbish resolution, things could be a lot worse and the IPS screen means you can share the display without it looking awful to the second person.

There are a few practical issues, though. The Gigaset QV830 is very, very reflective, to the extent that we'd recommend not buying it if you're looking for a tablet to use on the train or bus. Too much ambient light really ruins the party.

The tablet also lacks an ambient light sensor, so you need to manually bump up the brightness if you do take it outdoors.

There are compromises, but oddly enough the Gigaset QV830's cameras aren't affected too badly. You get both a front camera and a rear one, just lacking a flash on the back.

Both cameras produce pretty noisy photos, but we're actually pretty surprised at how good they are given you only have to pay £100 for the whole lot here.

The front 1.3-megapixel camera is very soft and low on detail, but the preview image in the app is snappy, as is taking photos. Perfectly fine for the odd selfie and a bit of video chat.

On the back, the 5-megapixel camera is no top performer, but it's not dreadful either. The best bit – it has an autofocus lens where some budget tablets have a fixed focus. This means you can take photos of things close up without everything looking blurry. There are also HDR and panorama modes.

You won't take any masterpieces with the Gigaset QV830, but the rear camera is actually a bit better than that of many £100 phones – even if the photos are very noisy.

The CPU tagline of the Gigaset QV830 sounds impressive. It has a quad-core 1.2GHz processor with 1GB of RAM. Not bad, eh? The reality isn't quite so rosy.

It's a Mediatek MT8125 processor, and whether it's down to the software or hardware, performance is slightly flawed. There's a bit of lag in the Android interface and flashier games don't perform anywhere near as well as they would do on a Nexus 7.

With some, like Real Racing 3, it's a slightly dodgy frame rate you need to put up with. Others cut out the fancier graphical effects to keep performance solid, like Dead Trigger 2. In part we can blame a pretty low-end graphics processor – for the geeks out there it's a PowerVR SGX544MP1. It's a bit slower than the 2012 Nexus 7, and trails far, far behind the current 7-inch Nexus.

If you don't mind a bit of lag and less-than-perfect gaming performance, you should get on with the Gigaset QV830 pretty well. It has an almost untouched version of Android 4.2.2, and fresh out of the box you have a near-blank canvas to work with. We wish there was a slightly newer Android version on-board, though, especially as we have no confidence that Gigaset will ever update it.

Battery life is another element that's not up there with the best, but then Gigaset never claims it to be. The maker says you'll get seven hours of video out of the QV830 from a charge. We got almost bang on seven hours, playing back a 720p video file at medium screen brightness. Nice truth-telling there, Gigaset.

It's a way off the stamina of the Nexus 7, and miles off the 10 hours of the iPad mini, but it could be worse. Some ultra-cheap tablets only last 4-5 hours. When playing games you can expect this figure to drop down further, but you should get around the same duration when just web browsing.

There's one other thing that holds the Gigaset QV830 back as a media/video buddy – the internal speaker is quite horrible. It's one of the harshest-sounding, thin speakers we've heard in a tablet. Putting this next to someone's ear and blasting out some Iron Maiden would probably be quite a good torture method. It's headphones or speakers all the way with this one.

How much should you expect from a £100 tablet? Cash-strapped people who want the style of an iPad mini for a fraction of the cost could do a lot worse than buying a Gigaset QV830. However, don't think you're getting everything an iPad – or even Nexus 7 – offers for less cash.

Most of the specs are a year or two out of date and the Gigaset QV830's performance is less than perfect. If you just want something to browse the web and play casual games on while lounging on the sofa, though, it's a pretty great buy for the family. Ultra-budget tablets like this are far, far better than they used to be just a couple of years ago.