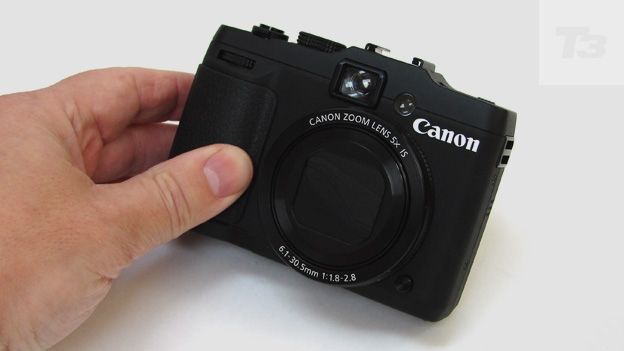 Aimed at camera experts, this Wi-Fi compact is much faster than its predecessor. So should you snap one up? Check our our Canon G16 review

Canon's G series PowerShots have traditionally carved out a niche as the more compact and portable back up for the DSLR user; at least until compact system cameras such as the brand's own Canon EOS M (now over a year old with no sign of an update) came along.

Appealing to serious photographers, PowerShots have always been brick-like and boxy. The latest Canon PowerShot G16, naturally updating the Canon G15 and claimed to be 41% quicker, is no exception.

Unlike a DSLR you can't switch the lens in use - here an image stabilised 5x optical zoom - but the build quality is right up there. The G16 also now ticks the latest box in providing Wi-Fi built in, for transferring images.

As this is a Canon pitched at photo enthusiasts we continue to be given an eye-level optical viewfinder, in addition to a fixed back plate LCD screen, via which to frame shots. A small pop-up flash is sunk into the top plate and manually activated by a lever just behind.

Outwardly suggesting seriousness, we also get two rangefinder camera-like top plate dials - one featuring shooting modes, the other exposure settings - positioned one atop the other like a couple of cogs.

Wi-Fi has also been shoehorned into the solid feel aluminium body, with a subtle leather-effect rubber padded handgrip aiding a firm hold. In terms of dimensions, despite improved portability when compared to an actual DSLR, this is nevertheless a camera for a jacket pocket rather than the pocket of your jeans.

That said, the accent here is still as much on the camera's speed as it would be with a DSLR or CSC. Thus we get a bright/fast f/1.8-2.8 aperture lens, which retains a good degree of brightness throughout the entire zoom range, and provides the opportunity for shallow depth of field photography.

There is also the ability to shoot at up to a whopping 12.2 frames per second, for up to five frames, as well as capture 1,920 x 1,080 pixels video at an equally impressive 60fps for a smoothly cinematic quality; the latter two specifications due in part to a latest-generation Digic 6 processor.

If there's anything about the £529.99 G16 that feels modest, it's the maximum resolution of 12.1 megapixels. But, in fact, not overly crowding the sensor is sensible given the physical size of CMOS sensor - namely 1/1.7-inches - deployed by the G16.

With the G16 powering up for the first shot in around two seconds, back screen blinking into life and lens extending to full wideangle setting, this is a chunky compact.

With a gently curved padded handgrip to the front, topped by a DSLR-like command dial and the overlapping wheels on the top plate as mentioned, the G16 sets out its stall as a compact targeted at enthusiasts rather than the 'happy snapper' point and shoot brigade.

However, its control layout is neither overly busy nor fussy; Canon has cherry picked dedicated controls that encompass the essentials.

For example on the backplate we usefully get a dedicated button for summoning up ISO options - too often buried within menus on rival models in our humble opinion - along with the more common menu, function, playback and display buttons. All are big enough to be accessed with a thumb press.

The top plate exposure wheel incidentally runs the usual gamut of incremental options stretching from -/+ 3V, while the shooting mode dial is an equally familiar mix of manual settings, fully auto options and a couple of customisable ones.

As you turn this dial, a toolbar of the various settings available in each mode very helpfully displays across the top of the LCD screen. Too often we have to wade through menu screens to get what we're looking for - but here it's literally at our fingertips.

The Canon PowerShot G16 offers the standard issue 3-inch back screen, which is here fixed rather than angle adjustable. Resolution is a thoroughly respectable 922K dots, offering god clarity.

A tilting LCD would have been more useful still for those otherwise awkward high or low angle shots, but don't forget there at least is the opportunity for photo purists to frame stills using the optical viewfinder above, as on a digital SLR. This suits those who prefer shooting with the camera up to the eye, rather than at arm's length.

With a rechargeable lithium-ion battery slotting into a familiar space at the base of the G16 handgrip, a compartment also shared with a slot for SD card media, Canon claims the camera is capable of capturing up to a maximum 480 images if placing the it in 'eco' mode, which is selectable via its easily navigated menu screens.

A separate charger and mains plug is provided in the box, so photographers can keep shooting if they invest in a spare battery.

A 5x optical zoom may not sound like much, but it at least offers more scope than a fixed focal length model. Alternatively, the chance to get in close, coupled with the ability to enjoy bright lens apertures throughout the zoom range, allows for beautiful shallow depth of field effects that transcend almost anything we've seen from a premium, non interchangeable lens compact camera to date.

Colours look naturally stunning and detail is pin sharp when downloaded to a desktop and viewed large. That bright aperture is also a boon for otherwise dull winter days. Put simply, the G16's quality is superb, despite its relatively low-ish pixel count by current standards.

Just goes to show it's not just how many pixels you have, but rather how they are utilised that counts. The same lens helps for low-light photography, even if we'd advise avoiding straying above a maximum ISO3200.

Above this at ISO6400 and ISO12800 fine detail very evidently begins to soften. For general-purpose photography though, and in particular street photography when you don't want to be pushing a large camera in people's faces, but want that semi pro-quality this Canon is hard to beat.

Shooting video is as easy as pushing the red record button on the backplate, and with stereo sound on board too, high-quality results are achievable. For filming in particular an angle adjustable screen would have been an added bonus, but overall the G16 acquits itself very well as a rock solid, but still fairly diminutive jack of all photographic trades.

As far as premium compacts go, the Canon PowerShot G16 is reassuringly brick-like, and in that respect as with its predecessors should satiate those who want their compact to feel as if from the same family as their EOS DSLR.

At £529.99 though, the price is comparable to a consumer-end DSLR, so its market really is most likely the photo enthusiast who already owns a Canon EOS and wants something that doesn't feel that far removed as a second shooter. Added to this, image quality is so superb you won't feel you're letting anyone down if opting to take this out for an occasional shoot rather than an actual DSLR.