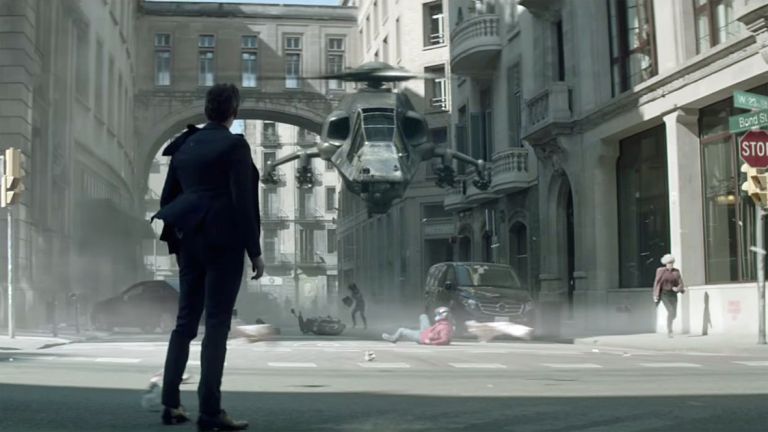 Spectre is out in cinemas today, with reviews praising the usual Bond staples ofcars,guns,more cars,mobile tech,yet more cars,watchesand cars. And razors, of course. Although Bond is never shown actually having a shave, it's clearly implied, as he is always VERY clean shaven.

Gillette's Flexball Fusion ProGlideis the official razor partner of Spectre, and to ram this point home, Gillette has made a crazily expensive looking Bond-style film of its own. Guess that's where all the money we spend on blades goes. This behind-the-scenes look at the ad's globe-spanning shoot is good fun, anyway.

In Spectre, a shadowy international organisation plots destruction and mayhem. In Gillette's advert, a shadowy international organisation bids to outsell Wilkinson Sword by means of a gloriously over-the-top advert that equates being clean shaven with being able to battle shadowy men with swords in alleyways, evade heavily-armed guards, attend misty public spaces that are being charged by riot police on horseback, and totally get it on with attractive ladies.

Starting with someone jumping from a plane without a parachute, the ad moves through showing our besuited not-Daniel-Craig hero dodging perils including a huge fireball in a tunnel and a collapsing factory chimmney that also presumably represents erectile dysfunction, and doing parkour through a closed window. Ending with the Bond surrogate being attacked in the toilet by an Eastern European bare-knuckle boxer, GIllette's ad has considerably more action than Quantum of Solace and, frankly, better developed characters. It also looks like it cost more.

Also check out our video of Bond's phones: