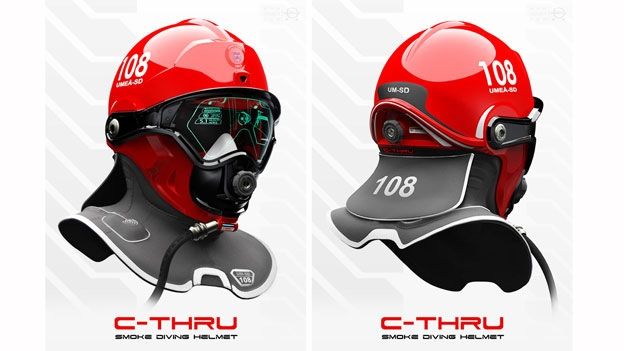 You're a firefighter, you're about to enter a burning building. You know before you go in you're going to spend most of the time fumbling through smoke in search of survivors. Well this helmet could give firefighters superpowers in such a situation.

Called the C-Thru, it promises to wirelessly beam environmental and video data to a cloud-based analysis service. This info would be processed, and displayed on every firefighter's HUD visor as a wireframe map of their surroundings.

This would work in conjunction with an optic-thermal camera that would help detect where people are.

Not only would this leave the firefighters' hands free for important tasks like navigating obstacles and dragging people to safety, the footage could also be stored for future uses like training or as evidence in lawsuits.

The C-Thru would also feature noise-cancelling tech that would drown out the noise of the fire, so firefighters could listen out for cries of help, as well as cracking timbers that are about to collapse.

So not only would it give them super vision, they would also have super hearing.

It's only a concept at the moment, but you can read more over at Behance. It's the brainchild of Omer Haciomeroglu from Turkey.