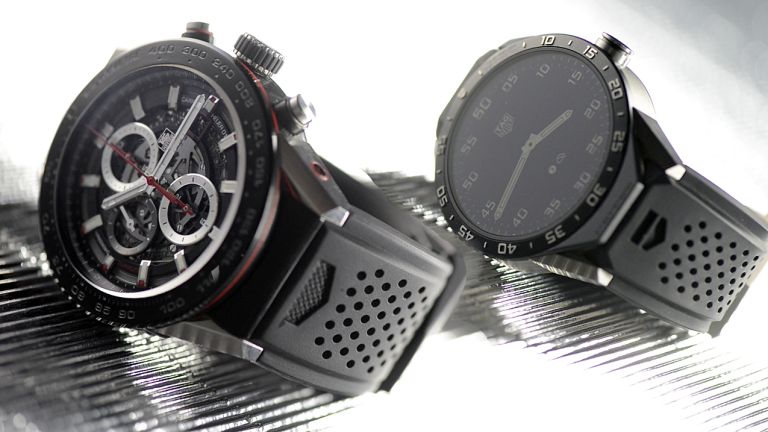 We've been very lucky here at T3 recently, having not one, but two TAG Heuer watches in the office. Well, when I say 'we', I mean 'I', because I've been wearing both, one on each wrist.

Is the Connected enough to tempt watch wearers away from their traditional timepieces?

Both are significant watches. The Connected is the first smartwatch released by an established Swiss brand, it's a flagship for the industry, and it's doing surprisingly well.

The Carrera Heuer 01 is also an important watch for the company, it's the first example of CEO Jean-Claude Biver's vision for TAG design. How do they compare?

The Connected is based on a Carrera design, so in that respect they're relatively similar, at least in terms of size, the Connected is 46mm in diameter, while the Carrera is 45mm.

The mechanical Carrera is thicker at around 15mm, compared to the Connected at 12.8mm.

That's slightly surprising, considering most tech journalists complain that smartwatches, such as the Moto 360 and Huawei Watch, are too thick at around 11mm.

Also, counter-intuitively, the bezel of the Connected is smaller, making way for the large 1.5-inch screen. That bezel is rather redundant however, as it simply displays the same information (minutes) as the digital watch display.

The bezel on the Carrera is thicker, but features a tachymeter, allowing the wearer to measure their speed.

Both crowns feature a TAG Heuer logo, but while the crown on the Connected is a simple home/power button, on the Carrera it's used for, y'know, actually adjusting the time and date.

There are also two extra buttons on the Carrera, used to start and reset the stopwatch.

In terms of weight, it's not exactly surprising that the mechanical watch is quite a bit heavier, weighing in at 154 grams (as opposed to the Connect's 81 grams).

The lightweight is also a smart design decision, because if you compare it to the featherweight Apple Watch Sport 22 grams (without a band), everyone would complain the TAG was far too heavy.

The rear casing of the Connected is also disappointing. Where the Heuer 01 is finished in a clear back showing off the internal mechanisms, the Connected is plastic. Plastic. On a luxury watch, that's just not good enough.

Of course, looking at things in minute detail is redundant. When you see the mechanical TAG it's strikingly attractive, especially with the skeleton dial and bold colour scheme. The Connected just doesn't have that same impact. If you were showing your friend the watch, you'd have to keep touching the screen to light it up, and the build just doesn't feel as solid.

Saying that, from a distance, or a quick glance, you'd be hard pressed to tell the Connected is a smartwatch, it's certainly the most 'watch-like' smartwatch we've ever tested. But as an item to show off, the Carrera wins hands down.

There's a clear winner here, and that's the Connected, obviously. The Connected is an Android Wear smartwatch, so it's capable of running apps, displaying phone notifications, voice control, navigation.

Clearly, it's a very useful device, I'm now at a point where, if I leave home without a smartwatch, I feel like I'm missing something.

The Heuer 01, on the other hand, tells the time.Of course, it does tell the time very well, it's much clearer than the Connected.

The Carrera also has a stopwatch function, date complication, and tachymeter, which allows you to measure your speed (as long as you know precisely how far you've travelled, and are good at maths).

The problem with functionality on the Connected is that it's identical to every-single-other Android Wear smartwatch, most of which are much cheaper.

Now, let's put our 'sensible' hat on for a while, and look at the cost of these two watches. The Connected costs £1,100, which is certainly at the lower end of TAG's price range.

The Carrera will cost around £3,500, while that's a lot of money, it actually represents good value. This, again, is Biver's influence, who maintains TAG should have an aggressive pricing structure.

When I say it's good value, it's important to remember how long these watches will last, because while the Connected will likely be obsolete in two years time, the Carrera will keep ticking for 50+ years.

There is the innovate 'trade-in' deal that TAG will run to combat this. At the end of your two-year warranty, the company will replace the watch for a mechanical Carrera (although, a significantly cheaper one than the Heuer 01, probably).

This will cost you an extra £1,100, but it's a 'nice', for want of a better word, option to have. It makes the purchase of your watch 'eternal', which was the company's aim.

Which watch should you get? It really depends what you're after. Both are very good watches.

If you've got £3,500 to spend on a watch, get the Heuer 01, and a cheaper Android Wear smartwatch (which has identical functionality to the Connected).

If you're after the most premium and least 'geeky' (but not necessarily the best) smartwatch, we'd suggest going with the Connected, and taking the trade-in deal at the end of two years.

Have TAG Heuer successfully created a seamless mechanical watch / smartwatch blend, not quite, but it's the best attempt we've seen so far (much more impressive that the mechanical watch with smartphone notification built in).