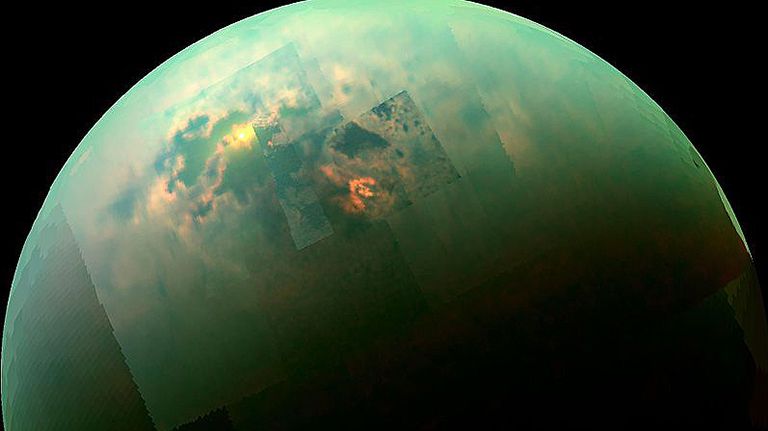 T3's Laura Mears reports in on the most interesting science stories of the week. For this edition of T3 Science Hit NASA finds cool chemistry on Saturn's moon, scientists kill bacteria with magnetic viruses and a clever AI learns to run.

Could there be life on Titan?

Saturn’s biggest moon is a potential treasure trove for astrobiologists, and this week they struck gold - twice. It turns out the atmosphere contains acrylonitrile and negatively charged ions, and both are exciting if you're hunting for life in the Solar System.

Titan's a freezing -179 degrees C and its muggy orange air is mostly nitrogen and methane. Molecules high up in the atmosphere are hit by light from the Sun and particles from Saturn, combining to form increasingly complex chemicals that drop down towards the surface in a haze of organic chemistry.

When Cassini flew through the upper atmosphere, it found negatively charged carbon chain anions - molecules that might have been part of the soup that kickstarted life on Earth.

As if that weren't enough excitement for one week, NASA scientists trawling through data from the ALMA Observatory in Chile found chemistry in Titan's atmosphere that could form membranes.

Life needs a container for its chemistry and on Earth that's managed by fatty cell membranes. These surround our cells, keeping the outside out and the inside in.

Titan's harsh conditions would be too much for Earth membranes, but sheaths of acrylonitrile could do the job nicely, potentially providing the molecular bags that life would need to get started.

Waging war on bacteria with nanoparticles

We have been locked in a biological war against bacteria for centuries, and this week scientists at Rice University and the University of Science and Technology of China have made a brand new weapon to kill slimy biofilms: viruses attached to magnetic nanoparticles.

The team have combined bacteriophages (viruses that infect bacteria) with iron oxide by coating the metal in chemical linkers called amino groups. This allowed the heads of the bacteriophages to be fused with the magnetic nanoparticles, turning the bacteria-infecting viruses into steerable nanobots.

Normal antibiotics and bacteriophages can't get in, but, these nanoparticles can bypass bacterial defences, steering straight into the biofilms under the influence of a weak magnetic field.

There's still a risk that the bacteria will become resistant to this new type of warfare, so the next step is to make lethal cocktails that combine different bacteriophages with antibiotics, overwhelming their ability to evade.

Teaching an AI to run

Motion capture is the still the best available tech when it comes to realistic in-game animation, but everything has to be planned and shot in advance. What if characters could learn to respond seamlessly to changing environments all on their own? That's what the DeepLoco team at the University of British Columbia have been working on.

DeepLoco's  gangly low-poly legs can walk and run automatically along narrow paths, around moving obstacles, and across conveyer belts. They can dribble a ball, attempt to navigate ice (albeit not very successfully in the video below), and they even keep going when they're pelted with flying cubes.

The algorithm is being trained using machine learning called ‘deep reinforcement’, and it borrows from human physiology and psychology.

The motion itself is split into two levels. The lower one looks after the movement and positioning of the joints, whilst the higher level thinks about where the legs actually need to go. They work through problems by trial and error, and when they get something right, they are rewarded.

And this impressive tech doesn't just have a future in video games, one day we might see robots bounding effortlessly through fields of raining cubes too.