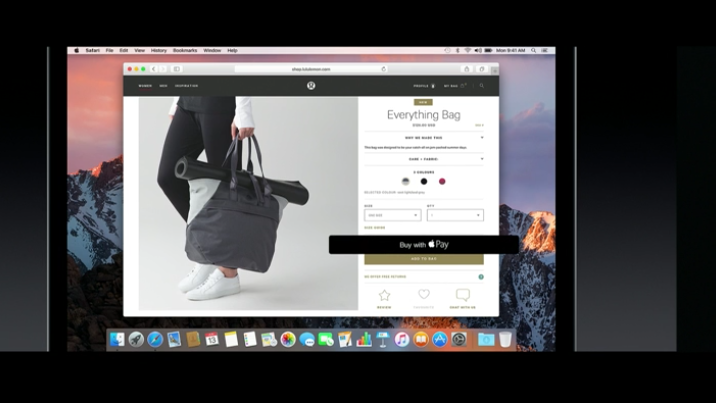 Apple Pay is, for many iPhone users, a very useful feature. The company launched the service a few years ago and has been steadily building out support for it in new countries—most recently Australia—and in various apps or physical retail locations.

Now, Mac users can get in on the action as Apple Pay moves to the Web. The announcement of this expansion was made at Apple's World Wide Developer Conference (WWDC), which started yesterday with a keynote address from CEO Tim Cook and other executives.

The address, which lasted around 2 hours, covered updates to almost every major Apple software product, including iOS, tvOS, watchOS, and macOS, which was, until recently, called Mac OS X.

Apple Pay has been something of a silent hit for Apple and helps the company expand into new areas and, more importantly, generate recurring revenue from pre-existing iPhone users. In London, for example, the service can be used to pay in any shop that supports contactless cards or on the tube. This means that Apple gets a percentage of every penny spent on the tube—which is a lot of pennies.

All of this is set in the backdrop of stagnating iPhone sales, which is important for Apple's future prospects as the iPhone generates around 60 to 70 percent of the company's revenues.

Wall Street has been looking for Apple to boost its “services” revenue to compensate and the company has been pushing this narrative heavily over the past few quarters, expanding the range of services it offers iPhone (and iPad) users to include music, news, cloud storage, payment options, more apps, and so on.

Opening Apple Pay up to the Web works like this: Users on a Mac will now see a “Pay with Apple Pay” button on websites, just like the button that currently exists in supported apps. Tapping this button will prompt the users to authenticate the purchase using Touch ID on an iPhone or Apple Watch. Once done, the payment will go through seamlessly.

Some have argued that this is a threat to PayPal, the online payments giant, but it seems like a strategy to entice hardcore Apple users above all else, especially as it doesn't appear to work on a Windows PC.

Of course, it's possible that PayPal will miss out on some revenue, but the addition of Apple Pay will most likely entice people who own multiple Apple products to jump onto the company's own platform.

People who have an iPhone but have been holding out on Apple Pay will now see the button in an increased amount of places—beyond the physical locations its already promoted in—and this will cause them to at least experiment with the service.

Having used Apple Pay in place of a contactless card for a while, its definitely worth investigating and it won't be at all surprising if Apple sees an increase in usage after making this jump.

One issue that could arise is that merchants don't want to integrate Apple Pay into their online shopping platforms, but Apple says it has signed up some big names right from the get-go including Target, Expedia, United Airlines, and some others. Stripe, the online payments startup, is also building support for the platform into its service, which is widely used among startups and other small businesses.

The company also announced that Apple Pay will be available in Switzerland, France, and Hong Kong this summer.

Expanding Apple Pay onto the Internet is a clever move for Apple and one that will likely bare fruit in the future as the company looks to expand beyond the iPhone and provide extra utility to its users.