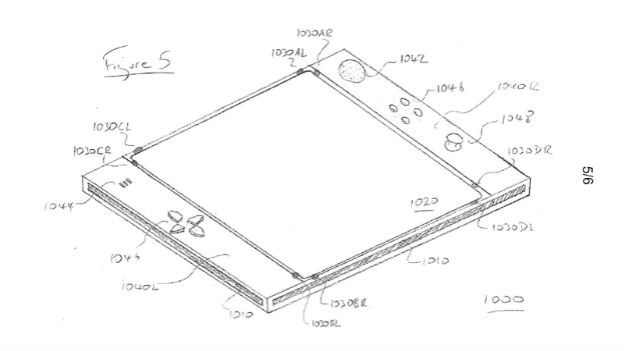 A patent filed last year by Sony appears to show a tablet-like gaming device with physical controls that could be both a rival to the iPad or - more likely - a new type of controller for the imminent PlayStation 4.

Filed last year, the patent is for a device called the EyePad that will feature a Wii U-like central touchscreen as well as motion sensors to track movement the same way as PlayStation Move.

According to the patent, which was flagged up by game blog Gamechup, the EyePad will also feature stereoscopic cameras at opposing ends of the tablet to let you interact with the 3D space above the screen. This could be used for AR games - something Sony has already experimented with using the camera on the PS Vita.

The patent goes into more detail about how the EyePad could interact with Sony's EyePet game that used the PlayStationEye camera on the PlayStation 3 to create a 3D virtual pet:

"For example, the EyePad may be used as a grooming table for an EyePet; in the EyePet games, video captured by the EyeToy video camera is displayed on a television in conjunction with a virtual pet character; movements of the user and the use of AR markers enables the user to interact with the pet."

Whether or not Sony will carry this patent right through to development remains to be seen. Perhaps the company will wait to see how Nintendo's Wii U console sells before committing to development.

Either way, Sony has enough to be concerned about as it is - the company is scheduled to reveal the next-generation PlayStation 4 tomorrow.